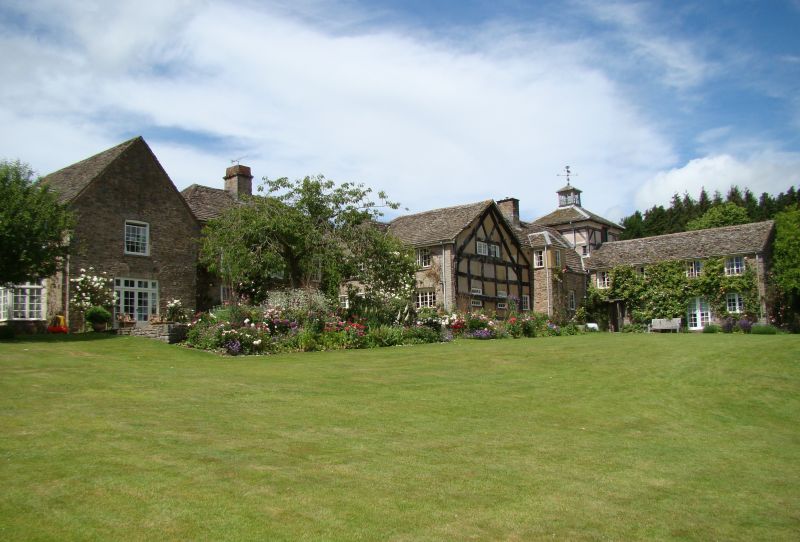 BRILLEY CP BRILLEY
SO 24 NE
5/29 Brilley Court Farmhouse
19.8.53
- II
Farmhouse. Possible medieval origins, rebuilt and altered circa 1600, with
extensive late C18 and late C20 additions. Part timber-framed with rendered
infill on rubble base, part rubble; stone tiled roofs laid in diminishing
courses with some gable-end parapets and rubble ridge stacks. Assymetrical
plan; eastern part (including cellar) probably medieval; adjoining block was
built circa 1600, then the substantial late C18 south-west wing was added
with further extensions and refronting to the north and west in the late C20.
Two storeys, attic with dormers and cellar. Framing: visible to south and
east. Three and four panels from sill to wall-plate, short straight upper
corner braces; collar and tie-beam truss to south with two main struts, and
a rail between them with a V-strut above. North-west entrance elevation:
substantially altered and extended C20; 1:3:2 bays; C20 windows. Central
part has a mullioned-and-transomed window in the left bay, a ground floor 16-
pane sash and a first floor 2-light casement with a cambered head in the
right bay, and the central bay has a canted hipped-roofed two-storey porch
wing with a 3-light first floor casement and a doorway with a moulded archi-
trave and partly glazed double doors. The left wing has a ground floor 16-
pane sash with a cambered head and a first floor 2-light casement. The right
wing has two first floor 16-pane sashes with cambered heads. The central part
retains its C18 facade to rear including its 16-pane sash windows with
cambered heads and central entrance with a flat ashlar canopy on shaped brackets,
moulded architrave and panelled double doors. Interior is recorded to retain
its early C17 staircase with turned balusters, moulded handrails and square
newels with turned terminals. (RCHM, III, p 24, item 20).