A Grade I Listed Building in Eye, Moreton and Ashton, County of Herefordshire 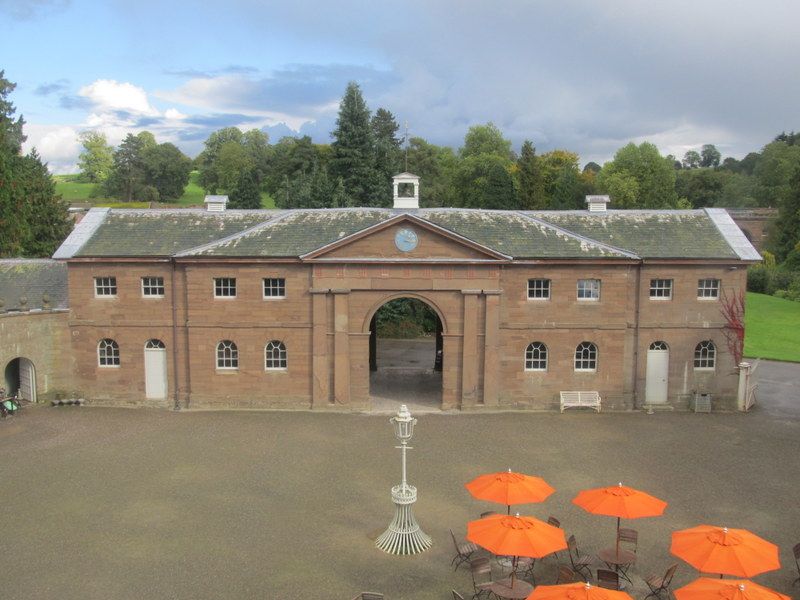 7/2 Berrington Hall and
adjoining outbuildings
11.6.59
GV I
Country house. 1778 - 1781 by Henry Holland for Thomas Harley. Alterations
of c1890 - 1900 involved the addition of a tower at the rear of the house,
this was removed in 1968 and the pediment to this face was reinstated. Set
in parkland laid out by Capability Brown. Brick core, faced with sandstone
ashlar with dressings of the same material, hipped Welsh slate roofs.
Rectangular plan main house with central entrance and stairwell, axial
stacks. Main entrance faces south-west, quadrant walls connect the main
block with the three outbuildings which form a courtyard to the rear (these
adjoining walls have been altered and one has been removed). Main house:
two storeys, attics and basements, south-west entrance front: seven bays
with plinth, dentilled cornice, blocking course and balustraded parapet,
steps up to central projecting tetrastyle Ionic portico; frieze is decorated
only to central part by a floral type design which replaces the original one
of putti, ox heads and garlands, pediment has a lunette window. Dormer windows
to attics with glazing bar sash windows, glazing bar sash windows to first
floor with semi-circular heads and decorative glazing to those flanking the
portico. Square-headed glazing bar sash windows to ground floor, the semi-
circular headed basement windows have rusticated surrounds. Central tall
and narrow semi-circular headed doorway with panelled door has keystone
depicting Roman head flanked by narrow side lights with reliefs depicting
urns above. The north-west front is of five bays with a pediment over the
central three bays. The north-east front to the courtyard entrance is of
2:3:2 bays with central pedimented slightly forward break, semi-circular
headed glazing bar sash windows to upper floor, square-headed windows to
ground floor with central three openings set in semi-circular headed surrounds,
right-hand opening now forms a doorway and has a six-panelled door. The out-
buildings enclosing the courtyard are of two storeys. The range to the north-
east is of nine bays with central pedimented archway flanked by pairs of Doric
pilasters, clock face in pediment, string course to flanking bays with 6-pane
square-headed windows to upper floor and semi-circular headed windows with
decorative glazing to ground floor. The ranges enclosing the courtyard to
the north-west and south-east are also of nine bays, each with similar windows
to the upper and lower floors, the central window to each range having a moulded
architrave, semi-circular headed window and doorway openings to ground floors.
To the outer walls of these flanking ranges (ie facing the gardens) are central
niches with coffered semi-domes with ball cresting above. The south-western
ends of both ranges have a blank semi-circular headed arch flanked by oculi.
Interior: the main house retains many of its original features on both main
floors, with decorative surrounds to doorways, decorative plastered ceilings
and marble fireplaces. The entrance hall has trophies in roundels above the
doors and a central circular ceiling panel is carried to the corners on spandrels,
pedimented surround to doorway opposite the entrance; polychrome marble patterned
floor. The Drawing Room retains original elaborate pelmets above the three
windows, marble fireplace with caryatids and griffon frieze. Delicately patterned
ceiling with painted roundels depicting scenes and characters from classical
mythology and with putti and sea horses; entwined roundels to outer border
which flank central theme. The boudoir has an alcove with segmental arch and
a screen of two blue scagliola columns. The Dining Room has a good marble
fireplace with carved panels to the jambs, decorative plastered and painted
ceiling with central painted roundel and swagged and wreathed plastered
surround. Pedimented bookcases to the library with continuous "greekkey"
type frieze. Decorative painted panels to ceiling depicting authors from
Chaucer to Addison. Central staircase hall is lit by delicately iron ribbed
glass domed lantern, opposite the staircase is a coffered archway; staircase
and landings carried on screens of scagliola columns, decorative dolphin
frieze to the entablature. The staircase has bronze lyre-shaped balustrading.
The outbuilding to the north-west formed the laundry and retains many of its
fittings. A tiled dairy has been restored in the south-east range and the
north-east range contains part stabling. (National Trust, 1986, Berrington Hall:
BoE, p 72).