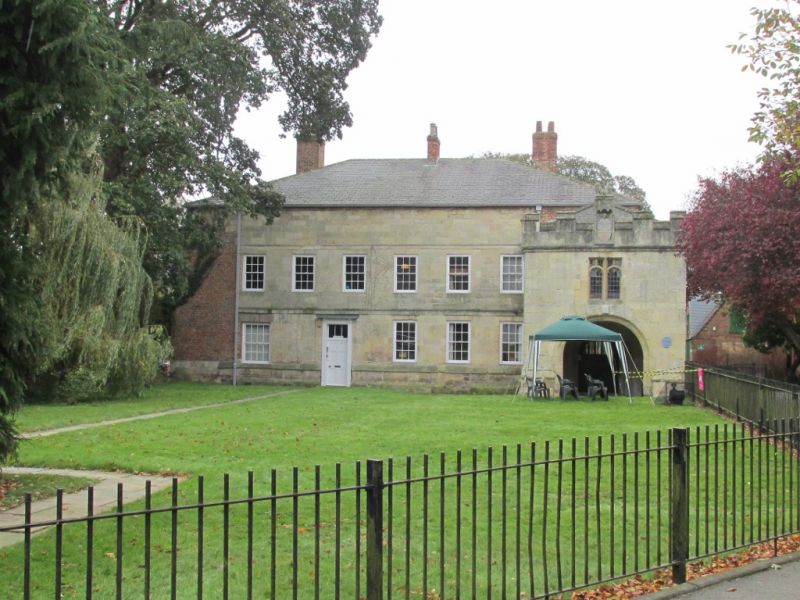 Church of England Parish: Howden with Barmby on the Marsh

GV II*
Hall of the manor of the Bishops of Durham. 1388-1405 incorporating earlier
work, for Bishop Skirlaugh. Alterations of the C16, C18 and C20. Magnesian
limestone ashlar and rubble, brick, Welsh slate roof. Formerly an open hall
and screens passage with entrance porch to north-west, now subdivided into
rooms with inserted first floor. North facade: 2 storeys, 7 first-floor
windows, with porch breaking forward to right. Main range: blind bay in
brick to left. Moulded plinth to all other bays. C20 six-fielded-panel
door beneath divided overlight with brackets holding cornice. 16-pane sash
to left, otherwise sashes with glazing bars throughout. First-floor band
and band over first-floor windows. Hipped roof. Ridge stack and stacks
rising through side pitches of roof. Porch: stepped chamfered plinth and
wide round archway with flat-headed 2-light cinque-cusped window above.
Projecting embattled parapet with central niche surmounted by a pair of dogs
and containing figure holding shield. West facade: tripartite sash with
glazing bars to left and 5 blocked arched openings from former screens
passage to right. Sashes with glazing bars to first floor and small
Yorkshire sashes to attic. South facade: to left a C20 door in medieval
pointed doorway of 2 moulded orders. C20 6-fielded-panel door to third bay,
otherwise sashes with glazing bars throughout except for 16-pane sash to
fourth bay. East facade: position of brick fireplace clearly visible to
left of first floor with blocked window to right. Interior: evidence for an
earlier rubble-built hall may be observed in the east wall with its tall
blocked arch of uncertain function, and the stone foundations of a bench
against it, probably the dais at the high end of the hall. Skirlaugh's work
includes the porch with its embossed quadripartite vaulting, the axial
doorway at the south end of the screens passage, the inserted doorway on the
north wall of the north-east room, formerly leading to a staircase tower,
and the tall windows whose jambs and springers may be seen in the south
wall. The floor levels are C16. The current window positions are C18
although all windows are replacements. Several Georgian and Victorian
fireplaces survive. The closed-string, turned baluster staircase is almost
entirely a replica, the C17 original having been destroyed by fire. Pevsner
N, Yorkshire: York and the East Riding, 1972; Whitwell J B, "The Bishop of
Durham's Manor House at Howden", Archaeological Journal, Vol 141, 1984.