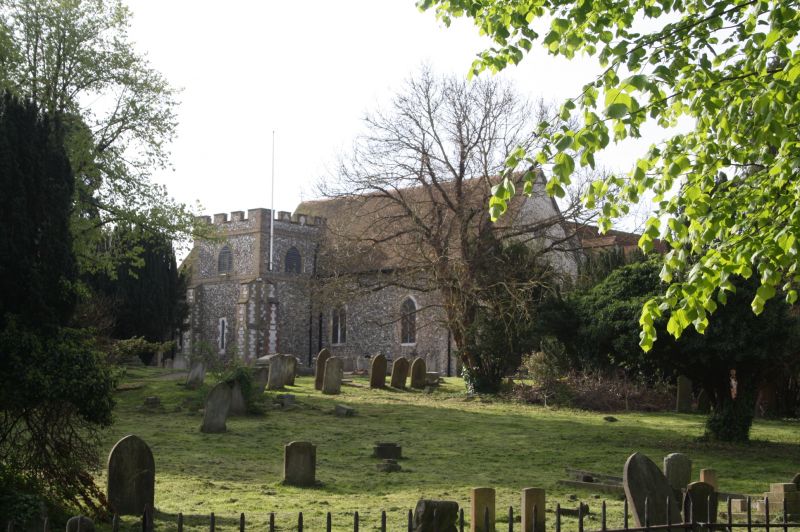 II*
The original nave is C11 in origin and has a late C12 W door. The chancel and NE tower are early C13. Some late C14 work including the addition of the W porch with the tomb of Nicholas de Ystele. NE Rufford chapel added in the C15. The NE vestry is also medieval in origin. Upper part of the tower rebuilt in the 1770s and again in 1809. Restored in 1874 when the NE vestry was added, and there was some refurnishing in the early C20. In 1957-8 a large, new S extension including a new church and an integral vestry/parish rooms complex was built to designs by Geddes Hyslop, the old nave becoming an ante chapel. The interior was refurbished and painted in the early C21.

MATERIALS
Flint rubble with stone dressings, and some brick on the C20 parish rooms. Piers and vaults of the new church are concrete. Tiled roofs.

PLAN
The orientation was altered during the C20 work. The medieval church comprised an unaisled nave with a W porch and NE tower, and a chancel with a NE chapel and C19 vestry. The extension of 1957-8 added a large new church to the S. This has E and W aisles, a chancel with a SW organ chamber and choir vestry, SE porch and clergy vestry, and a large parish rooms complex to the S. The medieval church forms an ante-chapel at the N end of the new church, with the former chancel as a chapel.

EXTERIOR
The church presents contrasting exteriors. From the N it is wholly medieval, albeit much restored, but from every other aspect it is entirely dominated by the C20 extensions. Late C14 W porch with a low-pitched roof. The outer opening, now closed by a door, has continuous chamfers and a hood mould with headstops. One C14 window with an ogee head next to it. Inside the porch is a good late C14 tomb recess. It has a depressed ogee head and cusping. The late C12 W door is of chevron and roll mouldings of jamb shafts with early leaf capitals; a later stoup has been cut into the jamb on the S side. Above the porch is a three-light C15 window and a C19 roundel in the gable.

The N wall of the old church nave has two C14 two-light windows and a blocked, C14 door. There were formerly three similar windows in the old nave S wall. The NE tower is very short and does not rise above the nave roof. Of two stages, the lower stage is buttressed has a narrow C13 lancet in the N wall. The short upper stage has late C18 or early C19 bell openings with pointed heads and an embattled parapet. The NE chapel has a restored, four-light C15 window. The N wall of the chancel has a C13 lancet and the remains of another that was blocked by the NE chapel. Below them is the NE vestry of uncertain, probably medieval date. It has a blocked W door with a pointed head and continuously chamfered opening, C19 windows in a C13 style in the E and N walls, and also in the N wall, a small, probably reset, late C12 window with a pointed head. The chancel has a triplet of C19 lancets in the E wall. The chancel S wall has a restored C13 lancet, a pair of C19 windows in a C13 style (each with a pair of lancets) and a plate tracery roundel. Between them is a heavily restored C15 or C16 door with a four-centred head in a square frame. The rest of the S side of the old church is entirely covered by the new church.

The new church is oriented N-S, and is in a stripped-down late Gothic style that takes its cue largely from late medieval domestic buildings. To the E it has four transverse gables, three of which have large windows with triangular heads and mullions; the fourth serves as an entrance porch and has a brick statue niche without a statue and a door with a heavy surround and the date 1957. On the W, there are five transverse gables, each with a window like those on the E. The contemporary S parish rooms complex is distinguished from the church by the use of brick, and has lancet windows in the side walls and brick diapering on flint and a roundel in the S wall.

INTERIOR:
Like the outside, the inside is in visually distinct sections, although the difference is lessened by the plastering and painting of both the new and the old sections. The S wall of the former nave is pierced by an arcade of three, large, plain pointed arches, and the old nave forms an ante chapel for the new church. The new church has four bay arcades with a central barrel vault and groin vaults in the aisles. The piers are square with chamfered corners and the transverse ribs also have a square profile. The last transverse arch acts as the new chancel arch. A late C15 door that formerly served the rood stair in the SE corner of the old nave is reset in the new chancel W (liturgical S) wall.

The early C13 chancel arch is pointed and a roll moulding and slender jamb shafts with stiff leaf capitals on both the inner and outer faces. The door to the N vestry is probably very early C13, and has a round head and a continuous roll moulding. There are C19 marble detached shafts on the E windows. The S tower arch of c.1200 has two, slightly chamfered orders and chamfered imposts. The lower part of the tower has a quadripartite vault with slender ribs. It formerly had an E lancet, parts of which are visible internally. A C15 arch leads into the adjacent NE chapel. The NE chapel has a C15 arch on polygonal responds with moulded capitals to the chancel, and a narrow, C15 door with a pointed head and hollow chamfered moulding leads to the NE vestry.

The considerable later C20 alterations have been executed with care, and endows the church with a large and luminous interior.

PRINCIPAL FIXTURES:
Anglo-Saxon sundial with a partial inscription in Old English and Latin, discovered during construction in 1957, is reset in the western pier of the new S arcade. Octagonal late C12 or early C13 font, standing on four marble shafts with moulded bases around a central core. C15 cover with ogee ribs and a foliate finial. Probably C13 sedilia, a single round-headed arch with roll mouldings, large enough to seat two; two probably C15 aumbries with depressed heads, one on each side of the chancel. A small C13 piscina in the tower.

Excellent rood screen of 1916 by W D Caroë in a flamboyant late Gothic style, with a very deep coving supporting a rood loft. The coving has very good blind tracery. Large late C19 reredos with a tiled dado and blind arcading in an Early English style, the central three bays more elaborate and framing a carved Last Supper. The backs of the arcading, the sculpture and the walls around the E window were painted in 1909. The C19 choir stalls with some openwork tracery on the fronts. All the other seating is 1950s. C19 trussed rafter roof in the nave of the old church, reusing older tie beams.

Windows of the old church of 1955 by L C Evett, replacing glass destroyed in WWII. Reredos in the new church designed by Geddes Hyslop and painted by Brian Thomas.

Monuments: Fine late C14 tomb recess in the W porch for the rector, Nicholas de Ystele, d.1370, who built the porch. Brass to Thomas Wilkynson, rector 1475-1511 and another to John Gower, vicar 1518-22. A few good C18 and early C19 wall tablets, including three to members of the Gee family by Chantrey. Some good C17 ledger stones in the chancel.

SUBSIDIARY FEATURES:
Part of the churchyard wall is C18 brick and was formerly the boundary with Bark Hart House. Large lychgate of 1879.

HISTORY:
There was a church at Orpington in the early C11, when Eadsige, a priest and royal chaplain, gave land to Christ Church cathedral, Canterbury. By the time of the Domesday book, there were two churches in Orpington, almost certainly All Saints and the church at Hayes. In the C19, Anglo-Saxon long and short work was said to have been visible in the SE corner of the nave before the restoration, and a Saxon sundial was found during the work in 1957. The nave was rebuilt or extended in the late C12 and has a Transitional W door. The chancel was rebuilt in the C13, and the NE tower was also added in the early C13. The NE vestry was added at an unknown date, but may also be C13. The W porch was added in 1370 by the rector, Nicholas de Ystele, who desired to be buried there. The NE chapel was added in the C15 and was a chantry chapel for members of the Rufford family. There was also other work in the C15, including the installation of the S chancel door and the former rood screen. In 1771 the tower was damaged in a storm and reduced in height. The upper part caught fire in 1809 and the present top of the tower is probably of that date. By 1840 it had a W gallery and a triple-decker pulpit, both removed during C19 restorations. The medieval screen, `a curious Gothic carving in oak, in excellent preservation', appears to have survived until at least the early C19, but a new screen was installed in 1869. There was further restoration in 1874, and some refurnishing in the early C20. In line with Orpington¿s dramatic growth as a suburb in the mid C20, the church was hugely extended and reoriented in 1957-8 with the construction of the new church to designs by Geddes Hyslop, relegating the old church effectively to becoming an ante-chapel. There was some reordering in the early C21.

REASONS FOR DESIGNATION:
The church of All Saints, Orpington is designated at Grade II* for the following principal reasons:
* For its interest as a parish church with Anglo-Saxon origins, good late C12 W door, C13 NE tower and chancel, W porch of c.1370, C15 NE chapel.
* For its fixtures; partial Anglo-Saxon sundial, late C12 or early C13 font, late C14 tomb recess in W porch, and two early C16 brasses.
* For the quality of its more recent phases, in particular the good rood screen of 1916 by W D Caroë and very large S extension of 1957-8 to designs by Geddes Hyslop.