The Well and Railings 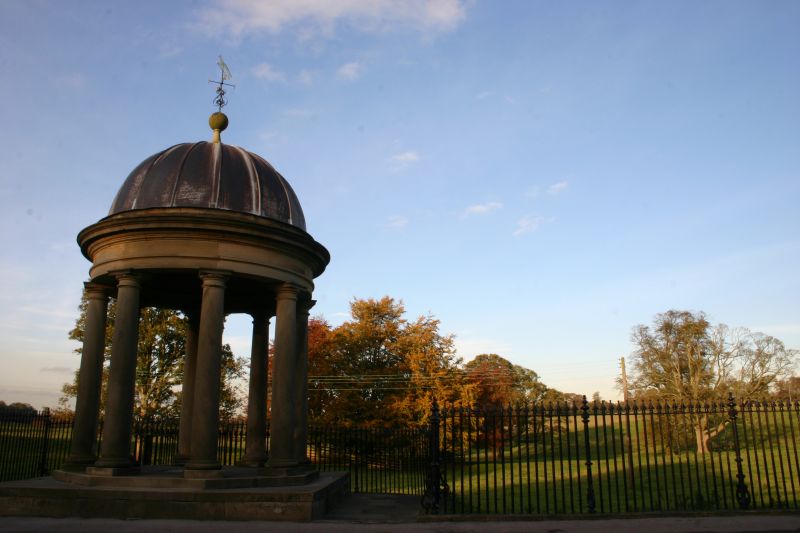 Entry Name: The Well and Railings

Monument and railings. 1840. Built for Sir Tatton Sykes, 4th Baronet, in
memory of his father Sir Christopher Sykes, 2nd Baronet. Sandstone ashlar
with lead roof, and iron railings. Monument in the form of a circular
temple. Square plinth, octagonal base, 8 Greek Doric
columns supporting frieze and cornice with domed roof surmounted by ball
finial and weather-vane with fox. Central area with glazed cover.
Inscription to frieze reads: 'THIS EDIFICE WAS ERECTED BY SIR TATTON SYKES
BART. TO THE MEMORY OF HIS FATHER SIR CHRISTOPHER SYKES BART, / WHO BY
ASSIDUITY AND PERSEVERANCE IN BUILDING AND PLANTING AND INCLOSING ON THE
YORKSHIRE WOLDS, IN THE SHORT / SPACE OF THIRTY YEARS, SET SUCH AN EXAMPLE
TO OTHER OWNERS OF LAND, AS HAS CAUSED WHAT ONCE WAS A BLEAK AND BARREN /
TRACT OF COUNTRY TO BECOME NOW ONE OF THE MOST PRODUCTIVE AND BEST
CULTIVATED DISTRICTS IN THE COUNTY OF YORK. AD. 1840'. Railings to sides
and rear: lances with ornamental standards between each 17 rails. Upper row
of bars. Approximately 16 metres to either side and around the rear.