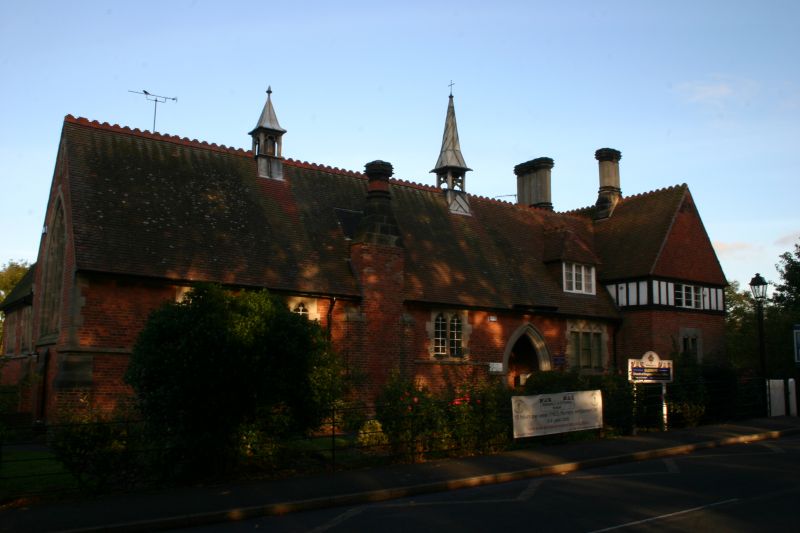 GV
II
Village school and schoolmaster's house. 1875 with later additions and alterations including those of mid-late C20 of no special interest. By G.E Street for Sir Tatton Sykes, fifth Baronet. Reddish-orange brick in English garden wall bond with ashlar dressings and some timber framing, with plain tile roof.

Originally T-shaped on plan, with C20 ranges to rear. Single-storey, three bay schoolroom, single bay with attic adjoining to right and taller schoolmaster's wing beyond to right which projects slightly, single storey with attic to gable. Angle buttress with offsets to left, to height of sill band and with quoins above. Plinth with ashlar copings. Entrance between third and fourth bays a pointed ashlar arch with cavetto moulding under hoodmould which continues across facade as sill band, within a pointed-arched plank door. Projecting stack interrupts sill band between second and third bays, tapering to octagonal chimney with star-shaped ashlar cowl. Bays one, two and three have two ogeed trefoil-light windows with chamfered mullions and quoined surrounds, with mainly diamond-paned casements. To fourth bay a similar three-light window but with blocked foils. Ashlar eaves band. Overhanging eaves. Skylight behind chimney. Roof dormer to attic in fourth bay has diamond-paned, three-light casement window. Ornamental ridge tiles and two fleches. To left gable end a four-light window with cusped lights in double-chamfered surround and with single light at apex.