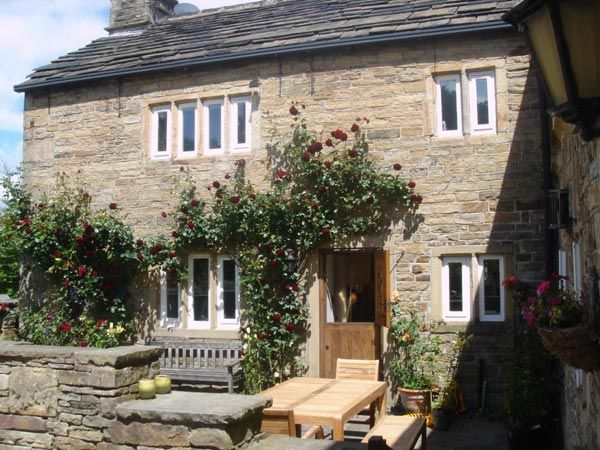 House.c.1650 for the Garside family with early C18 wing for
Edmund Butterworth and other wings of various dates. Random
dressed stone with stone dressings and stone slate roof;
front wing dressed stone; rear wing brick. Original
building consisted of a 3-unit plan all of two storeys;
central house-part with entrance to the left, porch to left
gable, and wing to the rear of hall. Wings were added to
front and rear of left unit and diagonally to the right hand
gabel end. The main range is of 5 bays plus the width of
the left hand wing. There are a total of 9 3-light windows
with flush cavetto moulded mullions and transoms with semi-
continuous headmoulds. The main chimney stack which was to
the left of the door (which no longer retains its original
surround) has been removed. The wing to the left is largely
re-built but retains its chamfered mullioned windows and
quoins. The end porch has a coped gabel and kneelers. The
rear elevation has various cross mullioned 5-light double
chamfered, 2-light flush chamfered, 1-light circular headed,
and 6-light flush chamfered mullioned windows. The Interior
has a closed string twisted baluster stair with an unusual
twisted newel-pole which supports a ceiling beam. Fishwick
History of the Parish of Rochdale 1889.