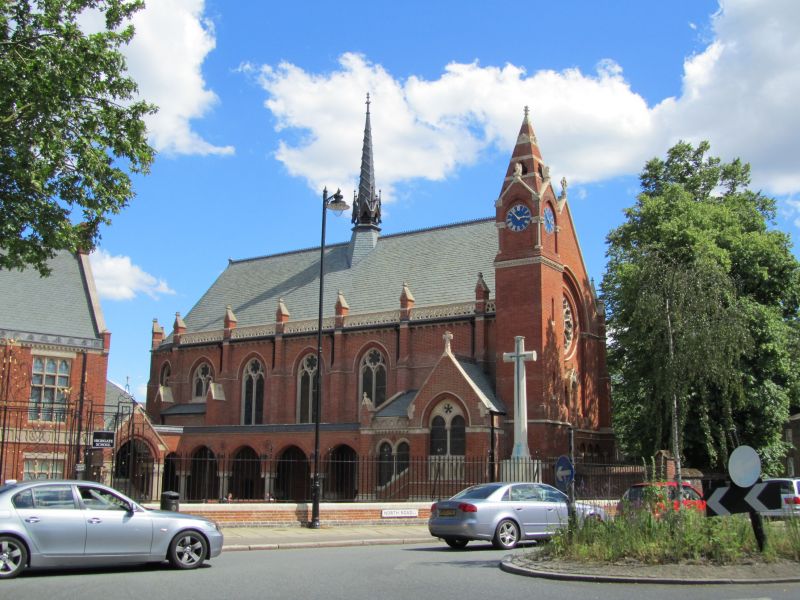 School chapel. 1865-6 by Frederick Pepys Cockerell. Red brick with some stone dressings and
decorations, internally polychromatic use of different coloured bricks with stone and tiles. Slate
roof Chapel partially raised over open undercroft to north and reached up steps to west under
clock tower. Five-bay body with five-light apse set liturgically, central timber fleche.
Round-arched lancets with central cusped light set between buttresses under parapet of open stone
tracery. To south and apse a blind, round-arched arcade with brick moulding in tympanums and
stone banding; to north the undercroft has a virtually round-arched arcade with octagonal columns
under unusual Ionic capitals, and moulded brickwork in spandrels. Undercroft has within it a pump
(moved there), wooden benches and a First World War Memorial. Steps lead thence past Boer
War Memorial to entrance door set within ballflower moulding and pointed arch.
Interior retains lavish polychromy to walls and floors. The body of the chapel is panelled to dado
height, with many memorials. Open timber truss roof Pews probably early C20, choir stalls
probably 1930s. Marble lining to dado height in apse, incorporating stoup; pulpit, lectern and altar
rails. Two organs, that at the west end installed 1980s. Good collection of stained glass, including
in the apse memorials to Henry Chester, died 1868; Robert Isherwood, 1837; Henry Leak 1863;
Thomas Causton 1856; William Bloxan, 1814; all in similar style. Particularly fine are windows
on the south side, which are good examples of1880s Aesthetic Movement style glass, and the west
rose window of uncertain date. One window replaced 1953 after war damage.
Highgate School chapel forms part of the major rebuilding of the school, founded in 1565, in the
mid-nineteenth century. The ensemble of chapel and school hall is of great architectural and
historical importance at the centre of Highgate village.
Sources:
C A Evans and A P White, 'The Story ofHighgate School, 1938-1949', c.1950 S W Kitchener,
'Old Highgate, the Story ofa London Village', n.d.

This List entry has been amended to add the source for War Memorials Register. This source was not used in the compilation of this List entry but is added here as a guide for further reading, 16 February 2017.