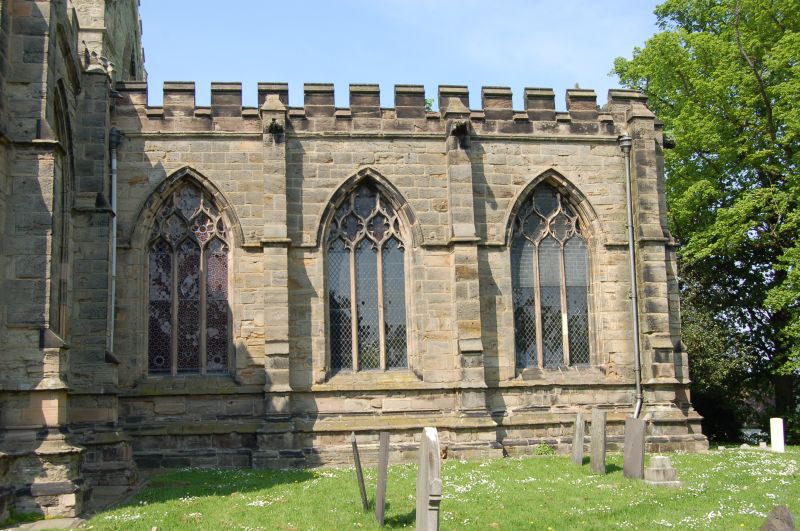 Parish church. Lower part of tower is C13, remainder of church all C14 and C15
clerestory. Restored 1859-60 by Joseph Mitchell of Sheffield. Further
restoration to tower and spire 1875 and 1886. Ashlar, with lead roofs.
Cruciform plan with west tower, aisled nave, and contemporary vestry to north of
chancel. Fine large building in Decorated style, with moulded plinth and sill
strings, battlemented parapets, off-set buttresses, and large arched windows
with restored reticulated tracery. Earlier west tower is of 4 stages with
chamfered lancets to 2 lower stages, and C13 2-light openings with colonnette
mullions to third stage. New bell-chamber added C14 with 2-light traceried
openings, embattled parapet, and fine octagonal spire. Spire has 2 tiers of
lucarnes. C19-C20 door with Caernarvon arch inserted into south side of tower.
Nave has C15 clerestory with 6 bays of rectangular 3-light windows, all with
ogee tracery. Remainder of church is in Decorated style as before, mostly with
3-light windows. Aisles are of 4 bays and have double-chamfered arched doors to
north and south. South porch has wide moulded arch and 2-light traceried side
windows. sbansepts each have one west window, 2 east windows, and 2 windows to
north or south. 3-bay chancel with carved gargoyles and 5-light east window.
North vestry is of 2 storeys, with C19 2-light traceried east window,moulded
north door, and slit windows to upper storey. INTERIOR is much restored and
scraped. Tower arch is C13, double-chamfered, with outer order on shafts.
Lancet window above. Nave has 4-bay arcades to aisles and wider single arches
to transepts, all double chamfered, the quatrefoil piers with fillets and
moulded capitals and bases. Between clerestory windows are small stone
corbels. C15 roof of nave is very fine, with moulded beams, richly carved
foliated bosses, and C19 carved wooden corbels in the form of figures playing
musical instruments. Aisle and transept roofs are C19-C20. South transept has
cusped ogee piscinae in east and south walls, and a similar cusped niche in east
wall. North transept has cusped piscina only in east wall. Chancel arch is
double chamfered and dies into jambs. Chancel has aumbry with shelf, and much
restored piscina and sedilia with cusped ogee arches and finials. Chamfered
arched doorway to north vestry. C19 roof. FITTINGS: over the chancel arch is a
very fine royal coat of arms dated CR 1684, carved in plaster and restored and
repainted 1935. In the chancel there is also a small carved wooden shield with
the royal arms, of c1500. One C15-C16 wooden chest. Octagonal stone font with
traceried panels is much restored. C18 and C19 memorial tablets.