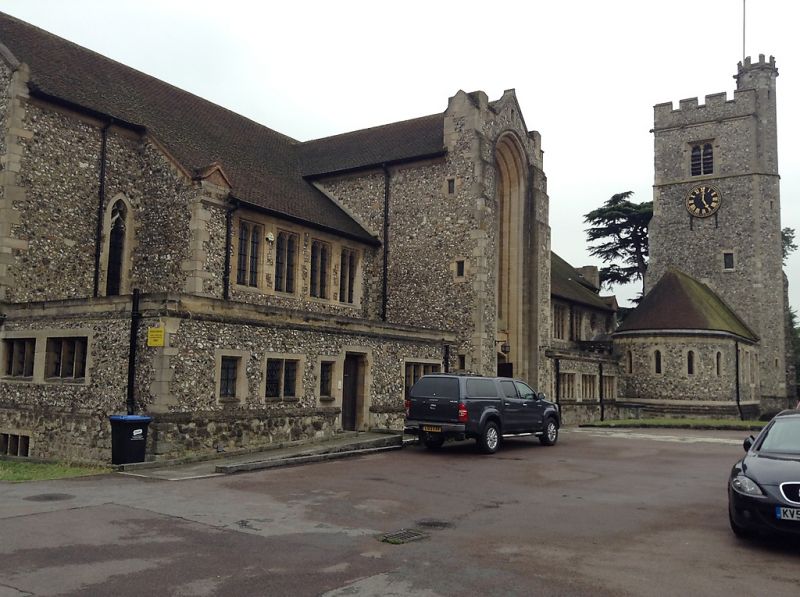 C15 tower. The church was otherwise entirely rebuilt in 1949-57 to designs by J Harold Gibbons. W parish rooms complex added in 1982 to the main body of the church.

PLAN
The tower is now attached to the NW corner of a complex-plan church with double aisles, transepts, large W parish rooms complex and apsidal chapel immediately to the E of the tower. It formerly stood at the W end of the S aisle of the old church, the site of which is almost entirely under the present car park.

EXTERIOR
The 1948-57 church is in a severe Gothic style influenced by the churches of southern France. The monumental, full height arch and enormous, early French gothic-style window with a statue on the central mullion over the main entrance in the N transept are particularly notable, as is the French gothic-style window tracery on the S side of the chancel and its massing with the much plainer S transept. There are also some later Gothic-style windows, including a large Perpendicular-style W window and Tudor-style windows with square heads in the aisles and clerestory.

The C15 tower is embattled and has a polygonal NE stair turret that rises above the parapet. It was very heavily restored after damage in 1941. Of three stages, it has a heavily restored C15-style W window, but no W door. There is a small, C20 S door. There are foiled, single light openings with square heads in the middle stage, and two light bell openings with foiled lights under square heads. To the E it is attached to the NW apsidal chapel that, although actually attached to the church, appears to stand clear of it, creating a good visual division between the medieval tower and the C20 church.

INTERIOR
The interior of the tower was gutted by fire in 1941, and now has an inserted floor to create an upper chapel. The C15 tower arch, which had a hollow chamfered outer order and an inner order, also hollow chamfered on polygonal responds with moulded capitals and high bases, has been underbuilt and now has plain doors opening from the apsidal chapel. The interior of the C20 church is plain and monumental, with elegant, stylised detailing in a stripped back early Gothic style, and has an excellent play of light and shadow.

PRINCIPAL FIXTURES
The C12 font survived the damage in 1941, and has a square bowl with blind arcading. It stands on a C20 base like an enormous cushion capital on a polygonal stem, and has a fine C20 cover in a stylised C17 style with ogee finials and curved buttresses rising to a central column. A C14 door with ogee tracery that survived the destruction of the old church hangs in the base of the tower.

The best graveslabs from the old church and churchyard are displayed in the N ambulatory passage including that for Elizabeth (Tetty) Johnson, d. 1752/3, wife of Dr Samuel Johnson. Also in the N ambulatory are Thornhill brasses of c.1600 and those for the Tweedy family. There is also a plaque for J Harold Gibbons, the architect of the rebuilding, d.1957, and one for Hazel Kissick, killed by the bomb that destroyed the church.

The pulpit was designed by J Harold Gibbons. Made by Robert Thompson, has carvings of the Four Evangelists and an inscription recording its donation by the Diocese of Rochester (USA). The choir stalls and S chapel screens are also by Gibbons in a free Gothic style, and there is also a wooden eagle lectern. The church has some good 1950s glass by M. E Aldridge-Rope.

SUBSIDIARY FEATURES
Some good monuments and table tombs in the churchyard. Lychgate of 1855. The present car park and adjoining garden stands over the remains of the old church, and is therefore archaeologically sensitive.

HISTORY
It is unclear if there was a church at Bromley before the Norman Conquest, but it is possible as the manor was held by the Bishop of Rochester. There was certainly a church here by the early C12. It was largely rebuilt in the C14, and the tower was built or rebuilt in the C15. By the C18 it had galleries. In 1824, the medieval church, except for the tower, was demolished and rebuilt on a much larger scale. The C19 church, except for the C15 tower, was entirely destroyed by a 550 pound bomb in April 1941. The tower itself was gutted by the resulting fire. The church was rebuilt in 1949-57 to the S of the old church, leaving the tower, which had previously stood at the W end of the S aisle, at the NW corner of the new structure. The architect was J Harold Gibbons, and the design was partly influenced by his church at Kenton (near Harrow), Middlesex, although Bromley is on a much grander scale.

REASONS FOR DESIGNATION
The church of St Peter and St Paul, Bromley, is designated at Grade II* for the following principal reasons:
* Its rebuilt C15 tower, the last remains of the medieval and C19 church.
* C12 font, preserved from the old church.
* Monument to Elizabeth (Tetty) Johnson, wife of Samuel Johnson.
* The rest of the church was rebuilt by J Harold Gibbons in 1949-57.