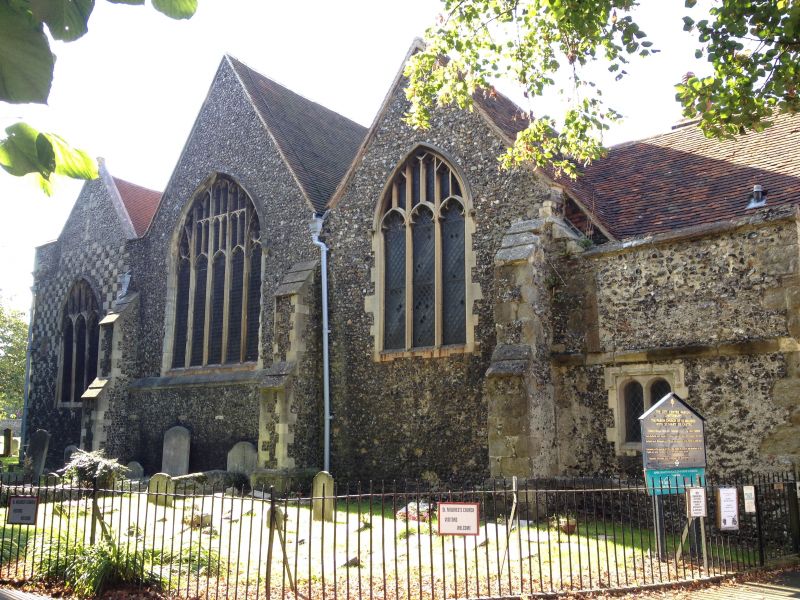 DATE: south wall and part of west wall of nave, along with a small section of the south wall of the chancel are visibly Saxon and the shell of the nave and probably the whole of the chancel are of this date. C13 north east chapel; C14 south windows to nave; C15 north aisle; 1512 south east chapel. In 1861 Butterfield restored the church and the west gallery with organ was replaced on the north side of the choir. A north porch was added in 1900. There was a 1920s restoration and also restoration following a 1973 fire.

MATERIALS: mostly flint with tiled roofs and freestone dressings of Kentish ragstone and Caen stone, with evidence of former render on the north side. The Saxon walling is a mixture of flint, tile and stone with very large quoins. The south east chapel is chequered flint and freestone; the gable of the north aisle is rebuilt in brick.

EXTERIOR: the north side has five renewed lancets, two of which originally lit the north tower built over the aisle, and a C19 gabled porch. The west end of the aisle is Perpendicular with a stringcourse, brick gable and two-light C19 west window with west doorway below. The north west quoins of the nave are concealed by a buttress. The north east vestry also has a stringcourse and a timber-framed north gable, depressed segmental arched doorway on the west side with a stack with a tall brick chimneyshaft. Five-light Perpendicular style traceried east window to chancel, three-light Perpendicular west window to nave. The south side of the nave has a single buttress and massive quoins at the east and west corners. Three two-light C14 Decorated windows, one with renewed masonry. The south wall of the Saxon chancel is truncated by the 1512 chapel which has three-light uncusped windows on its south and west sides and a C19 three-light Perpendicular style window to the east. The chapel has a probably later parapet and east and west gables with freestone crosses in the flintwork and a north-west stack with a flint and freestone chimneyshaft.

The south east chapel was built as a chantry chapel for the Atwood family and is thought to have been built in 1512. It has a C16 Tudor arched stone fireplace and a small C15 figure of St Mildred, perhaps assembled from various medieval fragments. A good quality C15 doorway into the vestry from the former north east chapel has carved spandrels and an original door with vertical mouldings. The chancel arch forms a tie beam with arched braces with a crownpost and two outer posts with timber panels between the outer posts and roofline. This is probably a 1920s arrangement, contemporary with the rood beam and figures below. The chancel has two C14 arches of unequal size on the north-east and a wide late Perpendicular double-chamfered arch on the south into the south chapel. Two, probably medieval, Perpendicular crownposts and tie beam trusses to the chancel, the crown posts with moulded bases and capitals and four-way braces. Crenellated wall-plate. Late C19 or early C20 boarded and panelled ceilure to the sanctuary. The chancel has 1920s panelling but its furnishings incorporate probable C15 or C16 carved Poppy-head bench ends originating from another church.

Monuments include various wall tablets of the C17 and C18. In the nave are an alabaster monument to Thomas Cranmer, nephew of the archbishop d. 1604, a monument to Sir William Cranmer d.1691 and black and white marble tomb chest to Sir Francis Head d. 1716 with panels on the sides of sunflowers and on the front arms and emblems of death. There are also a number of black basalt floor slabs. The chancel has a 1789 monument by Bacon to William Jackson d.1789. The parish room contains a monument by J F Mooore to Winefred Bridger d. 1776 with palm trees, Roman sarcophagus and winged victory and adjoining wall tablet to William Smith d.1699. Over the north porch are tablets with benefactions, a Royal Coat of Arms in the north aisle and the north aisle and nave contain eight hatchments.

HISTORY: The dedication is to St Mildred (d. 732), the daughter of Merewald, King of Mercia, and Ermenburga, a Princess of Kent. After an education at Chelles in France she joined her mother in the convent at Minster-in-Thanet and later succeeded her as abbess. The church was probably built in the mid C11, soon after the relics of St Mildred had been brought from Minster to St Augustine's Abbey. The church was in the ownership of St Augustine's Abbey until 1538 and then the crown. It was united with All Saints in 1684 but had been united with St Mary-de-Castro earlier.

REASON FOR DESIGNATION: The Church of St Mildred is designated for the following principal reasons:

The Church of St Mildred is listed Grade I for the following principal reasons:

* It is of exceptional importance for the survival of Saxon walling reusing Roman fabric, indicating a large Saxon church, plus a wealth of medieval fabric of various dates, including medieval roofs and an early C16 chantry chapel with heating;
* It contains fine quality fittings including C15 and C16 woodwork, C17 and C18 wall monuments and stained glass by notable firms;
* It is one of only a handful of Anglo-Saxon churches surviving in Kent.

SOURCES:
The church has been recorded in detail by NADFAS.