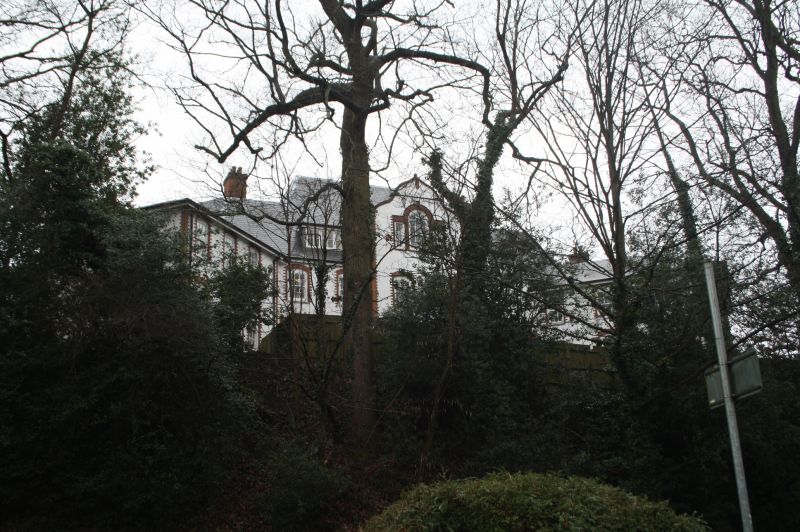 Former hospital. Designed in 1901 by T G (later Sir Thomas) Jackson (1835-1924)
for his sister Emily who devoted her life to working with children crippled by
Tuberculosis and wanted a purpose-built hospital for them. Built in William and
Mary style to an Edwardian butterfly plan which is very unusual for a hospital.
Some c1930 and later extensions. The original part comprises a 2-storey and
attics central administration block which probably also houses nurses flanked by
1 storey ward blocks. Cement rendered with red brick dressings and slate roof.
Central part of 2 storeys and attics, 5 windows. Steeply pitched hipped slate
roof, 5 dormers, the central and end pedimented, the intermediate one with
curved pediments, all with pivoting sashes. Other windows are 12-pane sashes
with horns. Brick stringcourse. Central doorcase with moulded shell fanlight
and brackets incorporating late C20 sidelights and double door. Bracket cornice
and brick plinth. To the right of the porch is a dedication stone laid by
Viscountess Templetown June 20th 1901. 2 storey, 1 bay splayed corner
blocks with triple window to first floor and cambered sash to ground floor.
Attached at angles are ward blocks of I storey with shaped gables surmounted by
ball finials and with louvred oculus. 5 large cambered sashes with horns and no
glazing bars. the lower half opened to provide fresh air for TB sufferers.
Originally the ends had verandahs for wheeling the beds into the open air. At
time of survey the right hand wing had a late C20 rich lean-to with 1930s
1-storey wing behind and the left hand wing had a late C2J lean to extension by
the junction with the central part and C20 rear canteen extensions. The rear
elevation (due to the sloping land) has a taller central block with 2 storeys,
attic and basement. Central feature of shaped gable with ball finial. Venetian
window to top floor. 2 cambered sashes with keystones to first floor. 2
cambered sashes to ground floor. Deep plinth. Tall round-headed panelled brick
chimneystack. Interior of central part has a stone and brass plaque to Emily
Jackson, 2 bolection-moulded fireplaces, 5 panelled doors and attic bedrooms
with wooden fireplaces and built-in cupboards beside the dormers. It was
originally called the Children's Hip Hospital.