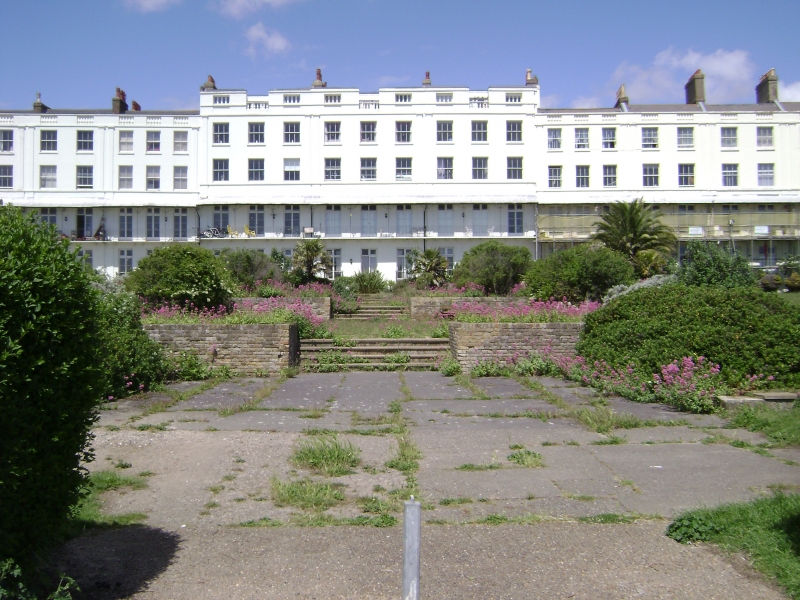 GV
II
House row, now hotel. Started 1826 for James Townley. Entrance front (to St Augustine's Road) highly irregular, of many dates largely stock brick, being actually the rear of the Crescent, the main facade of which faces the sea, southwards. Along St Augustine's Road is a wall, about eight feet high, originally the rear wall of the various house plots. In this wall are several door openings, mostly blocked, round headed, of which four have heavily rusticated surrounds; C20 canopy to hotel entrance.

South front: rendered with slate roof. Four storeys and basement, the central section and end pavilions taller, and with attics. The treatment of the facade shows slight variations, reflecting the piecemeal construction of what were originally twenty separate houses. Pilaster strips to ground and first floors, supporting a plinth, with giant pilasters over to second and third floors, and with balustraded parapet.

The original house units in the pavilions and centre piece of three bays, the ranges in between irregularly alternate two and three bays; a total frontage of forty-nine bays. Sashes, some with vertical glazing bars intact, to second and third floors, French windows throughout on first floor, with continuous verandah, returned to side elevations, with simple rails and heart shaped brackets. French windows also to ground floor, alternately with balconies and simple swept rails to flights of moulded marble steps, some replaced. Central doorway blocked. Sashes and irregularly occurring doors to basement.

Part of James Townley's large-scale plans to redevelop the barracks area west of Ramsgate, the crescent was planned to be twice its final length.