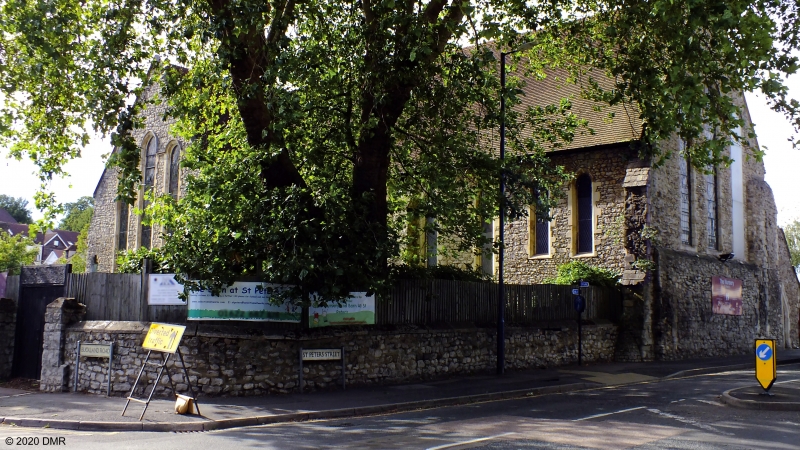 II*
Begun in the mid C13 as the chapel for a hospital for pilgrims travelling to Canterbury. Redundant after the Reformation, it was restored and enlarged in 1836-7 by John Whichcord, Snr. Restored in 1905, when the N vestry complex was built, and again in 1951. Converted to secular use early C21.

PLAN:
Nave and chancel in one, transepts towards W. Shallow W porch, N vestry with a lean-to addition between it and the N transept.

EXTERIOR
The exterior is in a simple, Early English style, with triple lancets with hood moulds at E and W ends and in the transepts, and single lancets elsewhere. The E windows, the first two on the N and S, and the W windows (the latter reset) are C13, the rest are C19. Trefoiled niche with a 1923 statue of St Peter on the S side, and below a C13 door with two rich orders, the outer on shafts, the inner continuous. There is a matching C19 door on the N side. The kneelers in the transepts have head corbels that may be medieval.

Gabled NE porch/vestry complex has an east door with a triangular head. Further doorway in the east wall of the projection behind, which has a 3-light C19 square headed window in the N gable and a chimney stack with a tall stone shaft on the E wall. Gabled W porch with moulded doorway on shafts, another C19 copy of the C13 S door. Small bellcot over W gable.

INTERIOR
The nave and chancel are roofed as one beyond the western transepts. The C13 chancel windows have shafted rerearches with roll mouldings on attached shafts with moulded capitals. Whichcord's nave largely follows the design of the original C13 work, but his lancets are separated by detached shafts of Bethersden marble. A trefoiled arch in the N wall was inserted in 1905 for the organ.

PRINCIPAL FIXTURES
Mid C13 sedilia and piscina in the chancel, heavily restored, with richly moulded, trefoiled arches on detached marble shafts with moulded capitals and bases, contemporary with the windows and the chancel as a whole. There is another C13 trefoiled piscina further west in the S wall. Tiled reredos of the Last Supper. Some C19 and C20 glass. All the other fittings have been removed. C19 boarded ceilings throughout.

HISTORY
The church began as the chapel of a hospital dedicated to SS Peter and Paul called the Newark of Maidstone, founded by Boniface, Archbishop of Canterbury (1244-1270) in the mid C13 for pilgrims crossing the nearby Medway. The original charter is lost, but a confirmation charter of 1261 exists. In 1395 the hospital was merged with the new foundation of All Saints, Maidstone, although the hospital apparently retained some independence. At the dissolution the hospital was sold to Lord Cobham, and the chapel had various secular uses. In 1836, work began to restore it for worship. The architect, John Whichcord, Snr. was a local architect who worked on both secular and ecclesiastical buildings around Maidstone. It opened in 1837 and was consecrated in 1839, gaining its own parish in 1840. The C13 structure now forms the eastern half of the building, and Whichcord carefully took down the W wall of the original building and re-erected it 40' to the W. By the late C20, the area around the church was largely industrial and the church became redundant. It was converted to other uses in the early C21.

REASONS FOR DESIGNATION
The former church of St Peter, Maidstone, is designated at Grade II* for the following principal reasons:
* It was originally a hospital chapel for pilgrims travelling to Canterbury.
* Very good C13 chancel with fine contemporary sedilia and piscina. W wall dismantled and re-erected in the C19.
* Converted to a parish church and enlarged in 1836-9 by John Whichcord, Snr.
* Where it survives, the C13 work is of very high quality as befits an archiepiscopal foundation.