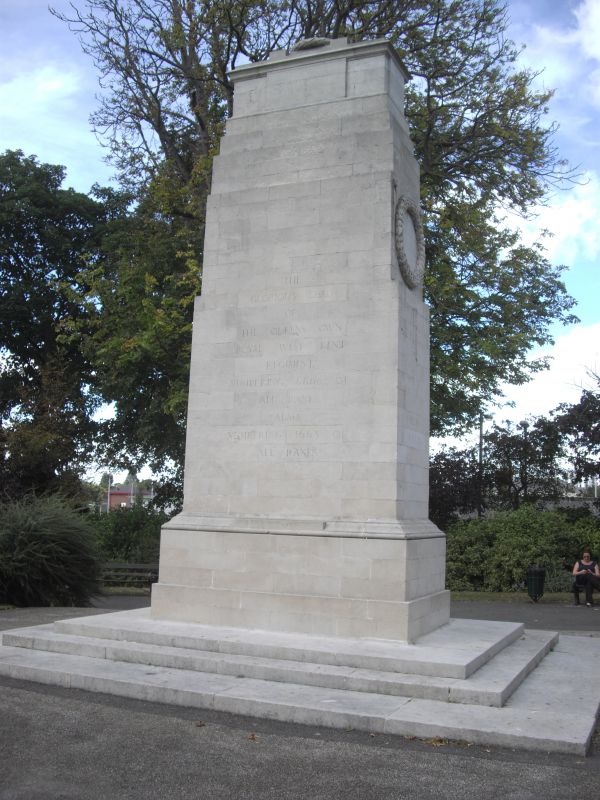 DESCRIPTION: the memorial stands at the junction of paths in the north-east part of Brenchley Gardens. In the form of Luyens’ cenotaph in Whitehall, London, it stands on a rectangular stone platform of three steps. It is rectangular in plan. At the top is a plain chest tomb with a moulded cover, on which lies a laurel wreath. The tomb stands on a three-stage base which, in turn, stands on a tall shaft, set back towards its upper section. Beneath is a two-stage base with cyma recta moulding to the foot of the shaft.

The cenotaph is sparsely enriched. On either end, at the upper corners of the shaft, are carved stone bosses with laurels suspended by stone fillets. Inscriptions on the south-east and north-west faces read: THE/ GLORIOUS DEAD/ OF/ THE QUEENS OWN/ ROYAL WEST KENT/ REGIMENT/ NUMBERING 6866 OF/ ALL RANKS/ ALSO/ NUMBERING 1663 OF/ ALL RANKS. On the north-east face above the wreath is MCM/ XIX, and below the wreath MCM/XLV; on the south-west face above the wreath is MCM/ XIV, and below the wreath MCM/ XXXIX.

This List entry has been amended to add the source for War Memorials Online. This source was not used in the compilation of this List entry but is added here as a guide for further reading, 1 December 2016.

The great wave of memorial building after the First World War resulted in thousands of commemorative monuments being raised both at home and on the battlefield. Lutyens was the most outstanding designer to work in this field. This is one of eight cenotaphs in England designed by Lutyens, and one of two that is a reduced scale copy of the original in Whitehall with minor changes (in this case, two-thirds full size). The earliest of Lutyens’s cenotaphs to be erected was at Southampton, in 1920; the latest was that at Norwich, in 1927.

A Regimental Memorial Committee was appointed in December 1918 and Lutyens was duly approached with a request to design a replica of the Cenotaph in Whitehall, to two-thirds size. It appears that he was happy to do this, in contrast to his approach to his Stone of Remembrance which, he insisted, could never be reduced in size. The memorial was built by a local company, Messrs GE Wallis and Sons. Other than in size, it also differs from the Whitehall Cenotaph in that it is unadorned by flags.

The memorial, commemorating 6,866 officers and men of the regiment who had died fighting during the First World War, was unveiled on 30 July 1921 by Major General Sir Edmund Leach KCB, the Regiment’s Colonel. The Archbishop of Canterbury dedicated the memorial and the address was given by Lieutenant-General Sir EAH Alderson KCB. Of c40,000 serving soldiers, the regiment had suffered c26,000 casualties. Following the service the King’s Colours of the Territorial and Service Battalions of the regiment were laid up in All Saints’ Church.

Inscriptions commemorating those servicemen of the regiment who died fighting during the Second World War were added at a later date.

Sir Edwin Lutyens OM RA (1869-1944) was the leading English architect of his generation. Before the First World War his reputation rested on his country houses and his work at New Delhi, but during and after the war he became the pre-eminent architect for war memorials in England, France and the British Empire. While the Cenotaph in Whitehall (London) had the most influence on other war memorials, the Thiepval Arch (a memorial to the Somme in Thiepval, France) was the most influential on other forms of architecture. He designed the Stone of Remembrance which was placed in all Imperial War Graves Commission cemeteries and in some cemeteries in England, including some with which he was not otherwise associated.

The Queen's Own Royal West Kent Regiment Cenotaph, situated in Brenchley Gardens, Maidstone, is listed at Grade II* for the following principal reasons:
* Historic interest: as an eloquent witness to service of this regiment, and the sacrifices it made in the conflicts of the C20;
* Architect: by the nationally renowned architect Sir Edwin Landseer Lutyens (1869-1944), who designed 58 memorials at home and abroad including the Cenotaph in Whitehall;
* Design quality: a simple yet elegant stone cenotaph, based on the Whitehall Cenotaph;
* Group value: with Grade II-listed statuary and architectural ornaments erected in Brenchley Gardens.