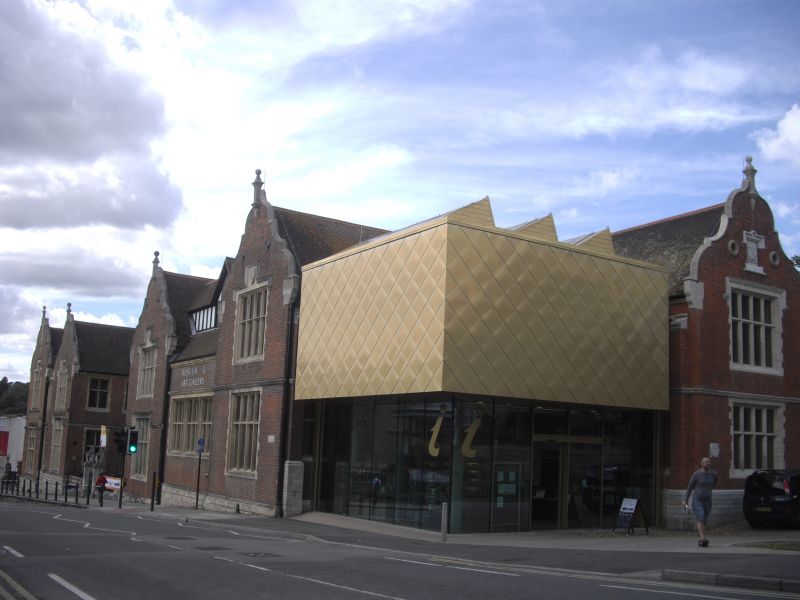 II*
The core is an early Elizabethan house built by Nicholas Barham who bought the manor in 1561. Heavily restored in 1875 it has later additions. The front facing St Faith Street is E-shaped. Red brick.

Each of the three projecting wings has three storeys, one window and a gable with kneelers, the apex of the gable being surmounted by stone animal figures and the kneelers by twisted finials ending in ball caps. These figures and finials were added in the C19. Between these projections is one window bay of two storeys. Stone cornice above each floor. Windows of three tiers of four lights with wooden mullions and transoms and diamond leaded panes. Giving entrance to the forecourt from St Faith Street are C19 stone gate piers surmounted by figures of lions sedant.

The back of the part of the building facing Brenchley Gardens has been added in the late C17. It has two storeys and an attic. Seven windows and five dormers with pediments. Red brick. Tiled roof and wooden modillion eaves cornice. Recessed panels between the ground and first floor windows. Casement windows with small square leaded panes. One-sash windows with glazing bars intact.

The north wing is timber-framed but restored and was formerly weatherboarded. On its east front it has three gables, the two southernmost ones of stone rubble on the ground floor and red brick above, the northernmost one of studded timber framing on a base of stone rubble. On the west front this wing is of red brick on the ground floor and studded above, the first floor overhanging on a moulded bressumer. Two storeys. Porch in the centre of the front with its first floor jettied and a gable over. Continuous gallery windows which are a modern reconstruction of the original.

Modern extension at the north end of the wing. Also modern extensions to the east and west of the main building replacing older structures.

The timber framed building to the east of the north wing was the south wing of Court Lodge East Farleigh, which was re-erected here in 1874. The interior contains a fine Elizabethan Great Hall with C16 panelling and its original screen which has a frieze pierced with a lattice of quatrefoils. Fine C16 fireplaces and cloisters dating from the reign of Henry VII or Henry VIII. The interior of the south wing of the Court Lodge East Farleigh has a crown post roof.