No 30, Incuding Railings to Basement Area at Front 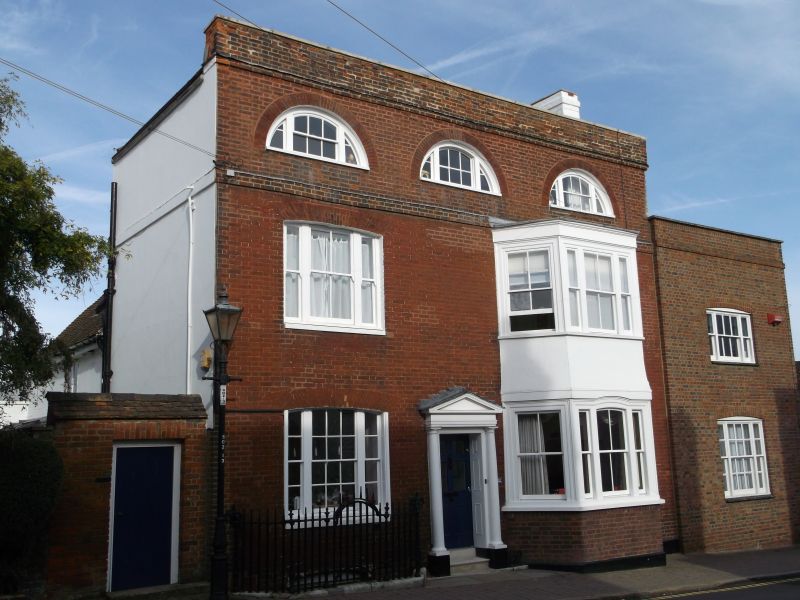 Entry Name: No 30, Incuding Railings to Basement Area at Front

ROCHESTER ST MARGARET ' S
TQ 7468 sw
STREET
9/221 No 30, including
railings to
basement area at
front
24.10.50
GV II
House. C18 with later extensions, but incorporating part of a
Cl7 building to rear. Largely brick, the older work timber-
framed and clad; all (except front) rendered. Concrete pantiles
and Welsh slates to roof. The Cl7 range set back from street now
forms a rear wing to the C18 house which was itself extended at
the rear in the C19 and C20 forming a double-depth plan, with
centre right), rear stack to main range, and axial stack to Cl7
wing. 2 and (mainly) 3 storeys. Front: originally a symmetrical
3-storey, 3-window range, unbalanced by the addition of a 2-
storeyed canted bay to right. Parapet with cornice band and
stone coping. 2nd storey has Diocletian windows with sashes
(except to centre, which has a pivotal casement). Plat band
between 1st and 2nd floors which have tripartite sashes (2:4:2
and 4:12:4 panes respectively) to left window bay. Canted bay
with 4-pane side sashes, and tripartite sashes to centre, to each
floor. Doorcase with pediment and Ionic attached columns, and
half-glazed door. Basement area protected by spear-headed
railings, raised to centre over gate fo deliveries. Rear
elevation much altered with late C20 room and balcony over.
Internally, a Georgian (but much renewed) stair with wreathed
rail and turned newels. A Cl7 winder stair survives, along with
some framing and roof sections.