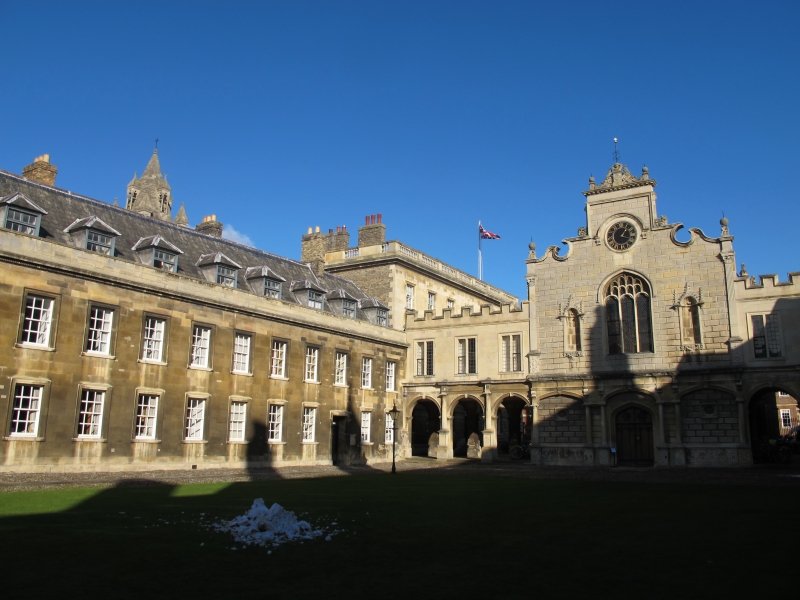 PETERHOUSE
1.
942
The Buildings surrounding
First Court, Old Court
and Gisborne Court
TL 4458 SE 6/278
TL 4458 NE 9/278 26.4.50
I
2.
First Court
The Chapel 1628-32, George Thompson, Mason; faced with ashlar in 1665.
The detailing is part Gothic, part Jocobean and part Classical; the motifs
of the last may be of the C18. The interior is lined with C18 bolection
moulded panelling. The roof was repaired in 1735, the interior restored
in 1821-2. The fittings include an oak door dated 1632, stalls of the
same date, C18 communion rails. The East window has C17 Flemish glass.
The organ is 1765 by Johann Schnetzler. Early C18 marble paving.
Arcades. Arcaded walls flanking the Chapel, the Northern one of 1709,
the Southern of 1711, the arcading is of round-headed arches with keystones
with attached Roman Doric columns. The upper storey is ashlar faced and
contains galleries.
North Range or Burrough's Building. 1738-42, by James Burrough. 3 storeys
and cellars. Brick with Ketton stone facing 7 bays, central doorway with
3 sash windows with glazing bars on either side. Venetian window on street
front, the interior contains many original fittings, the staircase, doorways,
fireplaces and much moulded panelling.
South Range. This is a continuation of the South range of Old Court (qv).
Old Court
South Range - the Hall. Built circa 1290, the oldest portion of the existing
buildings with the Buttery. 5 bays. Windows altered mid C15. North wall
refaced 1755. The whole building completely restored by Gilbert Scott
in 1879. The interior has one original doorway. The fireplace is of 1501.
The roof and bay windows are by Scott. The decoration of the interior
is an important example of the work of William Morris, particularly the
tiling round the fireplace and the glass in the bay window.
The Kitchen and Buttery. Both have C15 features including doorways, windows
and a staircase. The East end of the South Range is of 1460, circa 1590
and 1633, the north front was faced with ashlar in 1870 except for the
1633 part which is red brick. The interior contains 3 main rooms.
Combination Room 1460. Refitted 1868-70 by William Morris altered in 1946.
Glass by Ford Madox Brown and E Burne-Jones.
Perne Library. Circa 1590 and 1633. Late C16 staircase. Modern ceiling.
Contemporary stone fireplaces. Much C17 and C18 woodwork including the
fine main bookcase 1641-8 by William Ashley.
West Range. C15, refaced in ashlar on the East in 1754 and on the West
in Gothic style in 1826 as part of Gisborne Court, 2 storeys and attic.
C15, C16 and C18 windows, the interior has features from all centuries;
the old Library has panelling of circa 1590.
North Range. C15, refaced in ashlar in C18, south front only, the North
front is of marble and red brick. The external features are of the C15
and C18 centuries. The interior has C16, C17 and C18 panelling with other
features from each century.
Gisborne Court 1825-6. North and South ranges, the West range of Old Court
faced to match; the west side open. By W Mc I Brooks in the Tudor-Gothic
style. The East Range has several sham features to preserve the symmetry.
The interior of the North and South ranges have contemporary features of
plain design. (RCHM).