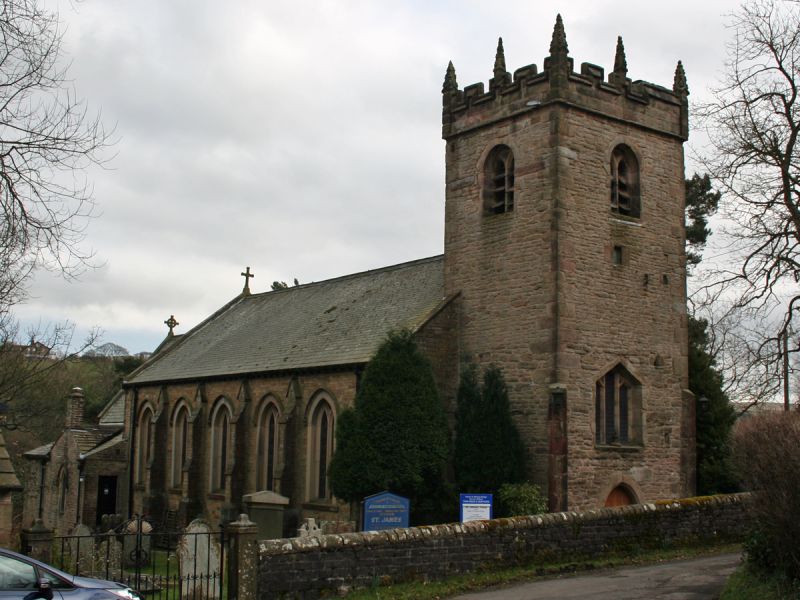 MATERIALS: Tower and part of the nave of coursed rubble gritstone with bigger quoins; remainder of coursed, squared gritstone; slate roof, with crested ridge tiles to chancel and organ chamber.

EXTERIOR: The 3-stage tower has diagonal buttresses in the lower stage, pointed west doorway and triangle-headed 3-light Perpendicular west window. In the middle stage there is only a small light in the west face and clock face on the south. Above the clock is the head of a former 2-light window with triangle-headed lights, and re-set later head corbels. The upper stage has 2-light openings with Y-tracery, below an embattled parapet with pinnacles. The 5-bay nave has buttresses with gables, and 2-light Y-tracery windows of 1825 in freestone surrounds with hood moulds. The south-west porch has an entrance with chamfered arch, and similar nave doorway has panel doors of 1825. The chancel has a 3-light window with plate tracery and moulded string below the sill, and one lancet south window. The gabled south organ chamber has a lancet south window, and tablet in the east wall commemorating the 1889 restoration. The north vestry is also gabled, with end stack, and has been extended to the east as a lean-to against the chancel.

INTERIOR: The tall tower arch is plain chamfered, and is now infilled with a war-memorial screen and glazing in the arch. The nave has a 6-bay hammerbeam roof on corbelled shafts. The chancel arch is double-chamfered, with an inner order on corbels. Walls are plastered and painted. The floor is of tile and stone paving, with floorboards below pews.

PRINCIPAL FIXTURES: The chancel is lined with a panelled dado, made in 1694 for the nave but moved into the chancel probably in 1925. Communion rails are late C17 with turned balusters, and there is a painted Queen Anne Royal Arms on a wooden board. Other furnishings are late C19 and C20. The pulpit is dated 1904 and is an ambitious but restrained alabaster piece with blind arcading, a narrow pedestal of Penzance marble, and with alabaster steps. Benches have shaped ends and probably belong to the 1889 restoration. Choir stalls belong to the 1925 refurbishment. The font of 1936 is octagonal and carved with the arms of the Jodrell family. There are several memorials, including C19 wall tablets, brasses, of which the earliest is to Reverend Edward Potts (d 1755) decorated with skull and cross bones. That to Michael Heathcote (d.1768) describes him as `Gentleman of the Pantry and Yeoman of the Mouth¿ to George II. In the chancel is a tomb slab, installed in 1925, commemorating members of the Jodrell family dating back to 1375. The Angel of the Resurrection in rich colours in the east window is by Heaton, Butler and Bayne (1889). A south chancel window of 1889 commemorates William Downes (d 1287), said to be the first rector of the church.

HISTORY: Of the medieval church only fragments of masonry in the tower have survived; Saxon origins have been posited for some of the tower masonry. The tower was built in the late C16 or C17. The remainder was rebuilt in 1825, and was restored in 1889 when the chancel was enlarged, although some fittings were retained from the pre-1825 church. Architects of these works are not known. The vestry was extended in 1922 and the chancel refurbished in 1925.

REASONS FOR DESIGNATION: The Church of St James, Whaley Bridge, is designated at Grade II* for the following principal reasons:
* The church is mainly in the simple Gothic style characteristic of the early C19, but it is especially notable for its C16-C17 Gothic-survival tower, from a period when there was comparatively little church building; this tower incorporates earlier fabric
* It has interior fittings of special interest, including late C17 communion rail and panelling, a monument to a courtier of George II, and a notable late C19 east window