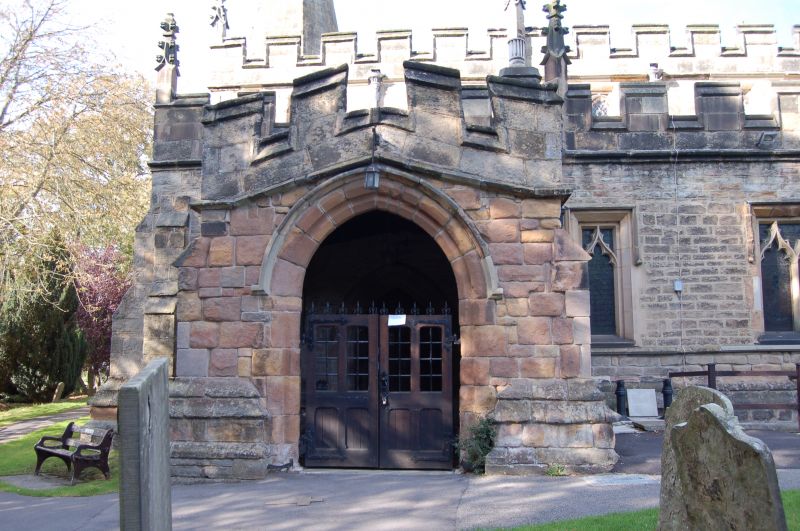 Parish church. C13, C15, restoration 1852-3 by Paxton and
Stokes, chancel rebuilt in 1911. Coursed sandstone and
sandstone ashlar. Roofs hidden behind crenellated parapets.
North west steeple, clerestoried nave with aisles, south porch,
chancel and south vestry. C13 tower now standing at the west
end of the north aisle. Two stages divided by a chamfer. Angle
buttresses. Blind to north, with a square clock face dated
1759. To the west a pair of trefoiled lancets and a single
lancet above. To the south partly engaged by the nave and with
a single chamfered doorway. On the east face is the gable line
of the former nave roof and a circular clock face inscribed
VICTORIA 1897. Stone broach spire with 2-light gabled lucarnes
low down and small single light lucarnes above. Weathervane.
North aisle of two bays with C19 gothic 2-light windows with bar
tracery. At the east end a buttress of two set-offs. 2-light
east window with C19 bar tracery. Tall chancel rebuilt in 1911.
Windows with bar tracery. Two 2-lights to the north and one
similar to south, and a 3-light to the east. Hoodmoulds with
headstops. Low buttresses with two set-offs. The south aisle
has a 2-light west window with Dec tracery. To the south,
gabled porch with plain double chamfered entrance and flanking
buttresses. To the right a single light and a 2-light window
both flat arched and deeply set with cusped ogee lights. The
south vestry to the east continues the line of the aisle and has
a similar 2-light window and a plainly chamfered priests
doorway. 2-light window with bar tracery to the east. The west
window of the nave is of 3-lights and Cl9. The nave clerestory
has three windows to north and four to south, all flat-arched
with two cusped arched lights with short mullions rising from
the apex of the arch. Two similar clerestory windows on the
south side of the chancel. Battlements and crocketed pinnacles
to nave, chancel and aisles. Interior: Moulded and filleted
south doorway with studded oak door. Stone seats in the porch
and C15 roof with moulded and chamfered beams. Re-set in the
west wall is a grave cover with floriated cross and other
fragments. Three bay arcades with circular piers (one octagonal
pier to north) and polygonal responds. Moulded capitals and
double chamfered arches. C19 double chamfered tower arch, the
inner order on moulded polygonal capitals and polyganal
responds. Two bay chancel south arcade with octagonal pier and
polygonal responds. Moulded capitals and double chamfered
arches. C19 marble pulpit with carved quatrefoil with the Lamb
of God. Entered from the nave and by steps up through a doorway
in the north aisle. Plain octagonal font. Early C20 chancel
furnishings including choir stalls, clergy desks, communion
rails etc. Good Dec style screen with cornice and parapet.
Brass eagle lectern. C19 stained glass in most windows, the
best in the West Window of c1859, possibly by Wailes. At west
end of the north aisle are benefaction boards.