A Grade I Listed Building in Stanton by Bridge, Derbyshire 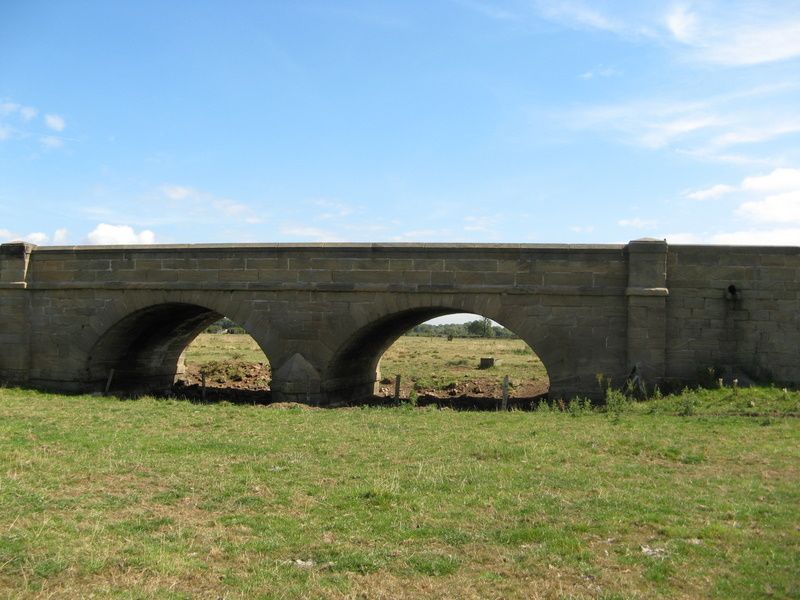 Bridge and causeway three quarters of a mile long. A bridge is first referred to in 1204. The present causeway dates from the late C13 or early C14. The bridge itself was destroyed by floods in 1795 and replaced 1795-7 by a new bridge probably designed by Thomas Sykes, the County Surveyor.

Repairs 1682, repairs and widening 1799, 1808, 1830, 1852-4 and blue brick strengthening arches inserted 1899. Coursed squared sandstone, sandstone ashlar, repair and strengthening in red and blue brick. At the north end is the bridge over the River Trent, of 1795-7. Five arches ramped to the centre. Segmental arches with plain drip moulds and between them, semi-circular cutwaters with rounded tops and pilaster strips above. Coped parapet walls with moulded string course at the base, splaying out to north approach.

Causeway to south. The first arch, a segmental arch partially rebuilt in 1977. To the south, a triangular buttress and group of rebuilt round arches. Then a pair of C14 pointed arches, visible to east, strengthened with C18 red brick ribs and engineering bricks of 1899. Widened to east. Triangular buttress on each side. Continuing to south, the parapet wall is interrupted for a short stretch by wooden fencing. Intermittent sections of medieval stringcourse. Then a group of medieval segment pointed arches with triangular buttresses, the arches lined with engineering bricks in 1899. Widened to east in 1853. Extensive length of medieval stringcourse before the next group of three medieval arches with triangular buttresses, the arches lined with engineering brick and widened to the west in 1853. Followed by a pair of later arches and a similar pair of medieval arches, the parapet to the east renewed in red brick. Further lengths of medieval stringcourse, and a medieval cutwater to east flanked by later arches and the springing point of a medieval arch. Then more lengths of medieval stringcourse, the wall battered below, and a pair of rounded arches with stepped voussoirs; possibly the two arches known to have been rebuilt in 1808. Finally a well preserved group of six medieval arches and a seventh rebuilt, round-arched in 1829. The segment pointed medieval arches are double chamfered and have five chamfered medieval ribs below, widened to west in 1854 with a further three ribs. Iron ties of 1854. The last curved portion of the causeway was built in 1830. Along the causeway are various masons marks. Also scheduled as an Ancient Monument (AM No: 7).