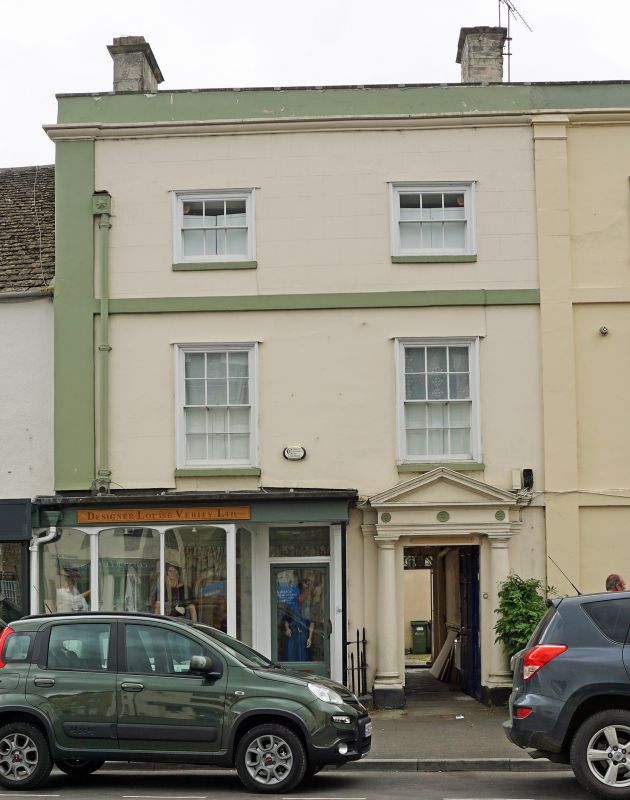 GV II
A large Classical townhouse of the mid-C18 with a C17 cross-gabled rear range, the whole property now in three separate units.

MATERIALS: The buildings are of rendered limestone rubble, with ashlar stacks, and a mixture of tile and Cotswold stone slate roofs.

EXTERIOR: The building has its main elevation facing the Market Place. This range is of five bays and three storeys with a parapet, having large end stacks, of ashlar with a moulded cornice to the left and of squared and coursed rubble with a projecting cornice to right. Plat bands mark the divisions between ground and first, and first and second floors; a moulded string course sits at the base of the parapet. The ground floor has a stone doorcase set to the left of the centre of the range (within No. 9) with attached Roman Doric columns, and a frieze with paterae cornice and pediment, housing a six-panel door with four fielded and two flush panels in a recessed, panelled reveal. This doorway gives access to a through-passage to the rear of the plot. To the left of the doorway there is a C19 shop front to No. 9, with a three-light shop window with segmental-headed lights, on a dwarf wall. To the right is a door with a plain overdoor light. To the right is a wide, plate-glass sash window with a moulded stone architrave and central, tooled keystone, and an added C20 wooden doorcase in imitation of No. 9, but without a frieze. The first floor has five windows, all six-over-six pane sashes with moulded wooden architraves; those to the second floor have three-over-three sashes. All the windows have stone sills and are set in shallow reveals. To the rear, the main range has a central doorway with shallow batwing fanlight giving access to the through-passage, via mid-C20 metal-framed glazed doors. The range to the rear of 8 Market Place, known as Grosvenor Cottage, is a C17 wing of two storeys and attic, with two cross-gables. The windows are a mixture of C18 and C19 sashes and later C20 replacements, in the original C17 openings. There are two small flat-roofed extensions dating from the mid-late C20 (not of special interest). To the rear of 9 Market Place is a two-bay, two-storey range running to the rear, with a further single-storey section to the south. The inner face has eight-over-eight sashes with stone sills to the first floor; to the ground floor is a window converted from a doorway with a moulded keystone. The through-passage between the two sections of the main range has a barrel-vaulted roof with timber mouldings at dado and cornice levels, and a decorative flagstone floor.

INTERIOR: The interior of 8 Market Place (Belgrave House) is now a single dwelling, with a stair set against its rear wall, and principal rooms at the front of each floor. 9 Market Place (Grosvenor House) has a commercial premises in the ground floor, and accommodation above. The interiors were not inspected (2009). The rear range (Grosvenor Cottage) has a single-depth plan with a large stair hall to the north, adjoining the main range and formerly allowing access from one range to the other. The open-well stair has a closed string with elegantly-turned newels, square balusters and a ramped and moulded handrail. There are cornices with egg-and-dart and reeded detailing, and a large, well-detailed ceiling rose with foliate motifs. Door cases off the hall have flat-moulded architraves with square terminals; the doors are various raised and fielded, panelled examples of the C18 and C19. The floor is laid with black and white diamond-set stone flags. The principal ground-floor room in this range has exposed beams, one re-used, perhaps from the same building, and a large, laterally-set stone fireplace with a bressumer and a continuous moulding along the bressumer and running down the stone uprights. A modern stair is set against the west wall. The first floor has exposed chamfered beams with stepped stops. The roof structure, with twin purlins, collars and later queen struts, is partly exposed in the attic floor, and includes chamfered and whitewashed timbers.

HISTORY: Grosvenor Cottage is the earliest surviving range on the site, having been constructed in the C17 as a narrow range running back from the Market Place. This building appears to have been joined in the mid-C18 by a large townhouse, running along the street frontage, incorporating a passageway behind an entrance door which gives access direct to the rear courtyard and the main front of the rear range. The two ranges were linked through a grand stair hall, and it appears that the earlier building was retained as a service range. The main range was later divided into two houses (now Belgrave House and Grosvenor House, 8 and 9 Market Place), and the rear range became a third, separate dwelling (now Grosvenor Cottage) around the turn of the C20. Some of the windows were replaced with modern examples during the mid- to late C20, and two small, flat-roofed extensions were added at about the same time.

REASONS FOR DESIGNATION:
Belgrave House and Grosvenor House (8 and 9 Market Place) and Grosvenor Cottage to the rear are designated at Grade II, for the following principal reasons:
* The main elevation, facing the Market Place, is an imposing, mid-C18 Classical composition with pleasing proportions and good detailing including a robust, pedimented doorcase; it is little altered
* To the rear of 8 Market Place is a well-preserved C17 range, which is cross-gabled in typical Cotswold vernacular style, and retains the majority of its C17 fabric
* In addition, the C17 range, a separate dwelling (Grosvenor Cottage), contains an elegant C18 stair hall which formerly provided the link between the main range to the Market Place and this range the rear, confirming the fact that the three units once formed a single, substantial house, for which Grosvenor Cottage was the service range
* Group value with the numerous other listed buildings around the Market Place