A Grade I Listed Building in Crondall, Farnham, Hampshire 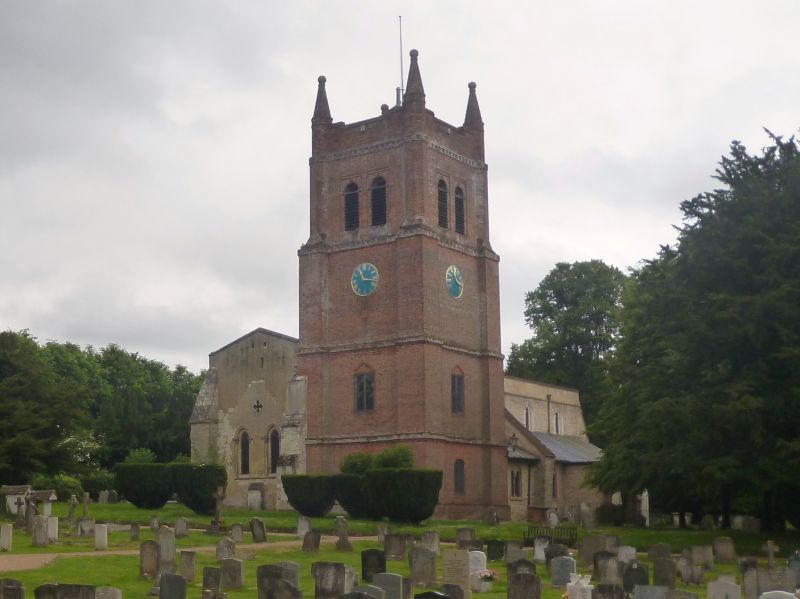 Of earlier origin, the structure is mainly of the period before and after 1200,
with a 2-bay chancel and a 4-bay nave, of which the eastern bay originally
consisted of a central tower and shallow transepts, identified by arches across
the aisles. The nave has round arches on massive piers, with carved caps, and
a tall clerestorey, lit by lancets. The chancel is Early English style, with
quadripartite vaulting, resting on arches with zig-zag and dog-tooth ornament
and clustered columns (some with stiff-leaf caps): lancet windows (later C14
insertions on the south side). The east bay has medieval canopied tombs on the
north and south sides. The external staircase (at the north west corner of the
chancel) of the central tower (removed in 1657) survives and is used, via external timber walkways, to give access to the replacement tower of 1659. This is
a huge red brick structure of medieval form attached to the north side of the
chancel, at the east end; it has plain corner pinnacles on octagonal corner
buttresses, a parapet, a bell stage having coupled openings (with round arches
within rectangular recessed frames) and at the widening floor levels, bands of
projecting ornamental brickwork. Supports to the former central tower and at
the west end show as massive sloping buttresses. C17 brick north porch. Low
pitched leaded (and aluminium) roofing, parapets, roughcast walling. Restored
1871 by Sir G G Scott. Several wall monuments, an old chest, old bells, two
brasses and a stone 'barrel' font of Norman date.