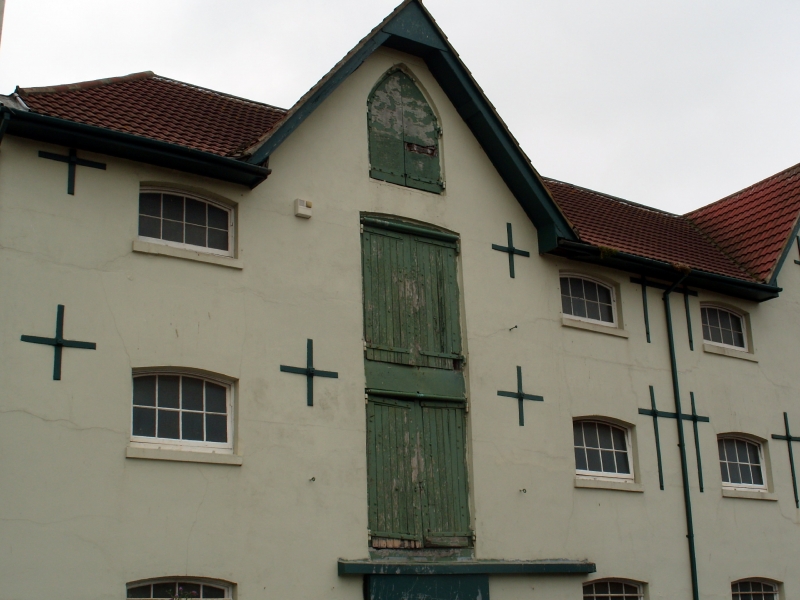 The following buildings shall be added to the list

Steam mill, bake house and grain store. A complex building of which the south
eastern part is a steam mill and bakehouse of 1781 built by Aaron Moody and
Christopher Potter to provide biscuits for the victualling of the Royal Navy
during the American War of Independence. This was extended to the north and
west to form a further bakehouse and grain store 1800-1811 to increase the
victualling of the fleet at the time of the Napoleonic Wars and in 1869 some
original timber posts were replaced by cruciform cast iron columns. In the
1920s the early C19 building had iron framed windows inserted in the south
elevation only. The original 1781 building is of 3 storeys brick in flemish
bond with hipped roof (in 4 hips to east front) now pantiled. South front has 2 windows, the top floor and one of the 1st floor windows original sashes, the
rest casements with cambered head linings to lower floors and oval-shaped iron
ties. East front has 4 original pivoting sashes and gabled wooden hoist to
the north end. Interior retains original wooden aisle posts except for ground
floor which had cruciform cast iron columns inserted in 1869. Attached to the
north and west is the bakehouse and grain store extension of 1800-1811. 3 storeys
brick, the west front stuccoed since the 1930s. Roof, plain tiled to south
and pantiled to west. West front incorporating a former domestic building of
3 storeys, 3 bays with verticals only to 2nd floor windows and 6 panes to 1st
floor windows. Ground floor has wide C20 inserted doors. To the south of this
is the former grain store, also of 3 storeys with attics and 4 pivoting sashes
and 2 gabled hoists with wooden doors to all floors. Cross-shaped iron ties.
South front has 5 1920s iron framed windows and oval and cross shaped iron ties.
Interior has cruciform cast iron columns of 1869 by the firm of Blumfield and Dalby, Southampton. Some of the original wooden posts still survive against
the walls in both the 1781 and 1800-11 parts of the building. James Watt described
Chapel Steam Mill as having 10 ovens which both discharged 16 times each day
and wight 3 cwt of bread. This was only the 3rd steam mill to be built in the
country and the only survivor of the early generation of steam mills.