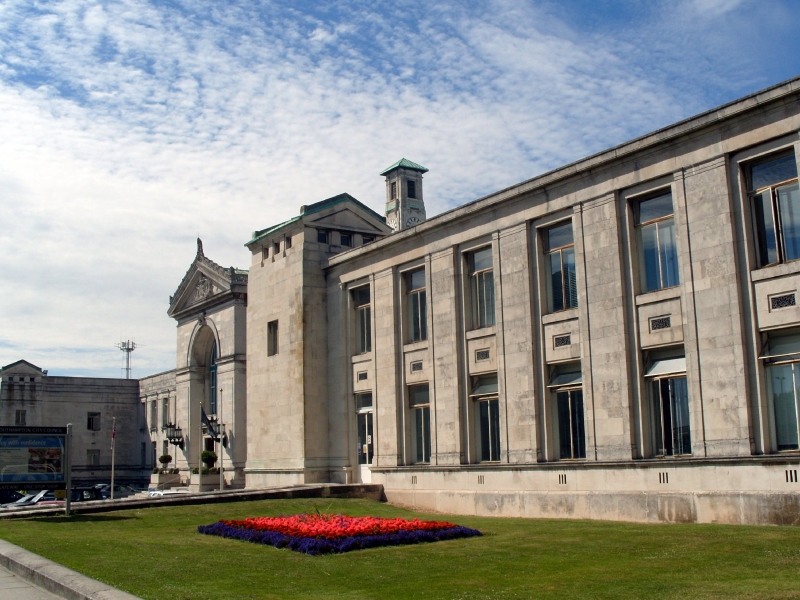 Includes: Southampton Civic Centre, WEST MARLANDS ROAD
Constructed between 1928 and 1939. Architect E Berry Webber following competition.
PLAN: a quadrangle of buildings with their principal facades facing outwards. On the west the Law Courts, on the south The Municipal Offices, on the east the Guildhall and on the north the Art Block. EXTERIOR: all the buildings symmetrical in composition, generally Classical in style and faced in Portland stone. Law Courts Centrepiece in the hall arched recess containing the entrance and flanked by 9-bay lower 2-storeyed wings. Above and behind the entrance rises the tall, gently tapering tower with clock, open bell stage and low pyramidal roof. Municipal Offices has pedimented centrepiece with the entrance within a tall arched recess above which is/are the City's Arms. Left and right, 5-bay lower 2-storeyed wings link with transverse administration blocks to form a shallow courtyard whose short sides terminate in sparsely fenestrated corner pedimented pavilions. The transverse blocks with 6-bay facades. The Guildhall has a large gabled public assembly hall with refreshment rooms left and right and a lower flat-roofed entrance hall with hexastyle Ionic portico. Wings to left and right create a courtyard. The Art Block was originally designed to house the Art Gallery and School of Art but was later required to house also the Central Library; so that the central entrance leads to the Art Gallery on the first floor and a porch on the left of the courtyard leads to the Library and one on the right leads to the School of Art on the ground floor under the Art Gallery. The composition is again that of a centrepiece with flanking wings and side blocks to form a courtyard. INTERIOR: not inspected. _