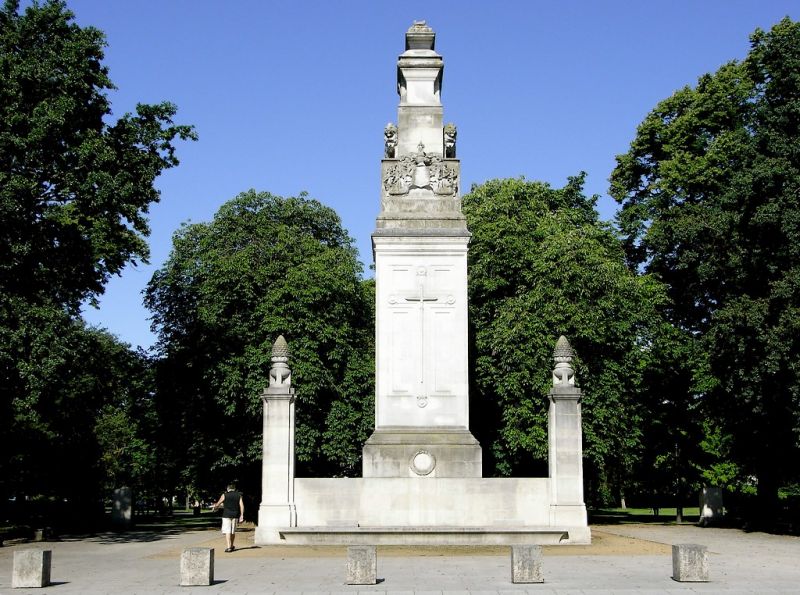 DESCRIPTION: the memorial stands in Watts (West) Park, alongside Above Bar Street. It is raised on a platform of five stone steps, with the Stone of Remembrance to the west of the cenotaph raised on a further two steps.

The cenotaph is in the form of a five-tier tapering stone pylon rising to a platform topped with a stone sarcophagus, on which is draped the recumbent effigy of a dead soldier. Flanking it to the west is a Stone of Remembrance and to the north and south, flush with the eastern face, two shorter single-tier pillars surmounted by fir cones (symbols of eternity); the latter being joined to the pylon by a seat and a wall.

The pedestal of the cenotaph has recessed panels on the north and south sides, where the 1,793 names of the fallen are inscribed. The supplemental roll of honour added in 1921 (203 names) and 1922 (one name) is inscribed at the shoulder of the pylon, below the recessed panels that contain the original list. In addition to the names of the fallen, the phrase OUR GLORIOUS DEAD is inscribed on the lower tier of the eastern (front) face of the central pylon and THEIR NAME LIVETH FOR EVERMORE into the west face of the Stone of Remembrance.

The central pylon contains a wealth of sculptural depictions; the eastern (front) face of the central pylon bears a cross of sacrifice; the eastern and western faces of the third tier bear the coat of arms of the city of Southampton; lions are mounted on the north and south shoulders of the fourth tier; and on the fifth tier, just below the sarcophagus, are sculpted wreaths enclosing the emblems of the army, navy, merchant marine and air forces.

Either side of the memorial, four individual panels of etched green glass (each 1.2m tall and 2.85m wide) are mounted in Portland Stone supports, bearing the names of the fallen.

Shortly after the First World War armistice on 11 November 1918, a public meeting was held in Southampton and a resolution was passed, that 'this meeting resolves to provide in Southampton a memorial to perpetuate the memory of those who had fallen in the Great War'. A committee was formed, to which the Lord Mayor, Alderman Sidney G Kimber, was elected both Chairman and Honorary Treasurer, and decided that 'the people of Southampton would like to point to some really fine outstanding memorial in the best position of the town, always to remind them of the sacrifices made for them and others'. One of its members, a local architect, Alfred Gutteridge, recommended Sir Edwin Lutyens (1869-1944) as a potential designer and, on 22 January 1919, the architect met Kimber, Gutteridge and others to discuss the matter.

Lutyens' designs were much sought after; his knighthood in the New Year honours in 1918 was partly, in addition to his work in New Delhi, as a result of his advice to the Imperial (now Commonwealth) War Graves Commission. He was one of the three principal architects appointed by the Commission, being justly acclaimed for the prodigious output of more than 50 war memorials projects.

Lutyens rejected the initial site (on Asylum Green) that his clients had chosen and suggested Watts (West) Park instead. However, his first design for a Stone of Remembrance flanked by a pair of arches, at the east and west entrances to Watts Park, each topped by a recumbent figure resting on a pier was rejected by the committee because of its perceived cost (the architect had been given a budget of £10,000). In its place, Lutyens retained the upper part of the arch that contained the figure, but set it on a tall modelled pillar. He kept the Stone of Remembrance and, in a nod to his proposal for the temporary war shrine, he included two smaller columns topped by pine cones.

The new design was approved at a public meeting on 12 September 1919 and, with drawings that could now be shown to the public, fundraising began. Tenders were invited for the building work and, on 16 December 1919, a bid of £8,500 was accepted from Messrs Holloway Bros of Westminster. Building work commenced and the memorial was completed for the unveiling on 6 November 1920 by Major General JEB ('Galloping Jack') Seely, Lord Lieutenant of Hampshire, whilst the Bishop of Winchester, the Right Reverend Edward Stuart, undertook the dedication.

The unveiling, at which Lutyens was present, was a two-stage affair, which Seely began by pulling a cord that allowed a light canvas-covered structure encasing the memorial to fall away. He then addressed the crowd and released the Union Flag that covered the figure atop the memorial. The ceremony concluded with the Last Post, two minutes' silence, the Lord's Prayer and the National Anthem, before Kimber, on behalf of the subscribers, formally handed over the memorial to the Council. It was described in the pamphlet produced for the dedication ceremony as 'The Great War Stone of Remembrance, a monolith, an altar in form, identical to those which lie in each of our War Cemeteries throughout the War area, with the words chosen by Mr. Rudyard Kipling - "Their name liveth for evermore" - cut on its west face. Behind this stone, on a plinth, standing on a platform of steps, rises a great pylon'.

The pamphlet for the dedication ceremony claimed there to be 1,800 names of the men of Southampton who died in the war, however, there were actually 1,793 and included a number of women who had worked in the Merchant Navy or with the Queen Mary's Army Auxiliary Corps. A total of £9,485 17s 3d had been raised which, after the deduction of costs, left a balance of £101 18s 11d that was donated to the Hampshire County and Isle of Wight War Memorial Fund.

In the months following the dedication a number of families came forward asking that their loved ones also be included, but their requests were initially refused, being told that is was not possible to add any further names. A Mrs Hayball, the mother of an unlisted fallen soldier, then contacted Norton Catchpole, Secretary of the Hampshire Division of the Comrades of the Great War, who took up the case and advertised in the Echo for more families to come forward. By 26 April 1921 Catchpole had a list of a further 148 names, which he sent to Kimber who headed the War Memorial Committee.

As a result of Catchpole's letters in the local newspaper he was contacted by PF Morant, of Morant Bros stonemasons, Southampton. Morant offered to cut the extra names free of charge, on the understanding that it would be done anonymously. He did not want a “cheap advertisement” and wrote to Catchpole that “I am offering to do this as I am an ex-service man myself and thankful my own name hasn't to go on there”. Despite this offer, when the decision was taken to add the missing names, by then standing at 203, Garret and Haysom were commissioned. Their invoice for £26 16s shows that the work was completed by 15 November 1921. This was not quite the final act and, in February 1922, Garret and Haysom were hired again to add the 1,997th and final name, William Henry Thomas Deem.

The addition of names of the fallen from the Second World War was proposed in 1995, but was not undertaken at that time. With the passage of time, the carved names of the fallen of the First World War became increasingly illegible. It was therefore decided to etch the names onto eight glass panels (designed by Martin Donlin) that were erected on either side of the memorial and dedicated on 11 November 2011. Southampton Cenotaph now commemorates servicemen and women who fell during both the First and Second World Wars, the Malayan Emergency, the Korean War and the Mau Mau Uprising.

Sir Edwin Lutyens OM RA (1869-1944) was the leading English architect of his generation. Before the First World War his reputation rested on his country houses and his work at New Delhi, but during and after the war he became the pre-eminent architect for war memorials in England, France and the British Empire. While the Cenotaph in Whitehall (London) had the most influence on other war memorials, the Thiepval Arch (a memorial to the Somme in Thiepval, France) was the most influential on other forms of architecture. He designed the Stone of Remembrance which was placed in all Imperial War Graves Commission cemeteries and in some cemeteries in England, including some with which he was not otherwise associated.

Southampton Cenotaph, situated in Watts Park, is listed at Grade I for the following principal reasons:
* Historic interest: as an eloquent witness to the tragic impacts of world events on this community, and the sacrifices it made in the conflicts of the C20;
* Architect: by the nationally renowned architect Sir Edwin Landseer Lutyens (1869-1944), who designed 58 memorials at home and abroad including the Cenotaph in Whitehall;
* Architectural interest: the first iteration by Sir Edwin Lutyens of a template which was to be adopted across the nation for some of its most notable war memorials, most notably the Grade I-listed Whitehall cenotaph;
* Design: the elaborate design is notable for the wealth of carved decoration in comparison to the austerity of cenotaphs that were to follow;
* Group value: the memorial is a prominent feature of the registered Central Parks (Grade II), in which stand a number of listed statues and the nearby Monument to the Engineers of the Titanic (1912).