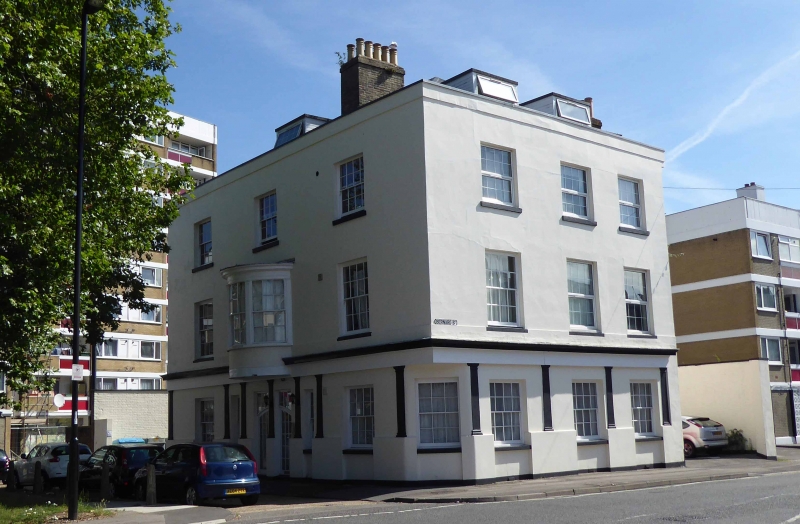 GII
Early C19 house,later in the C19 hotel with some later alterations.The building is stuccoed with a slate roof and brick chimneys.The original plan has been lost due to conversion to modern flats.It is three bay and three-storeyed with attic conversions.A modern entrance has been created in the centre of the front(west)elevation with a glass door with leaded lights,a corresponding false door to the left and two/two sashes to each side.Above the doorway is a cantilevered segmental bow window.The front(west)and south elevations have shallow Doric-style pilaster strips between the window embrasures on the ground floor with a facia and moulded cornice above.The four/four set back horned sash windows on the front elevation are all original.The windows on the south elevation on the ground floor are original,but two of the three on the first floor are replacements.All windows have a simple cement sill and most have been replaced,but in a sympathetic arrangement.The building appears to have a mansard roof with a parapet on all but the rear sides.Two chimneys with four pots each are situated on the east side of the building,and a double chimney with ten pots on the west.There are two modern dormer windows on the north side,two on the south and one on the west side.The original interior of the building has been stripped out during conversion to flats and now has a modern staircase giving access to created narrow corridors with rooms opening off them.HISTORY:The architecture of the building suggests an early C19 date.It appears on the Ordnance Survey map of Southampton of 1881 labelled as a hotel.It lies towards the south side of the city on the spur between the Rivers Itchen and Test,just to the north of the docks and would have had easy access to the railway,cattle market and docks.This part of the city appears to have been a planned development in the C19.In Oxford Street opposite was the Seamens'House which housed sailors(17 of the Titanic's crewmen gave this as their address),and it was the home to orphans before being sent to sea.The railway reached Southampton by 1840.It was the success of Southampton due to the shipping industry,its port facilities and good land communications that made it a prime target for bombing in World War II.REASONS FOR DESIGNATION The Globe former public house dating to the early C19 is designated at Grade II for the following principal reasons:*The Globe is an early C19 building which retains an overall external architectural quality,which is of special interest.*The Globe has group value with other listed buildings in Bernard Street and forms part of the surviving early C19 street ensemble.*Southampton was severely bombed in World War II and this early C19 building is therefore a relatively rare survival.