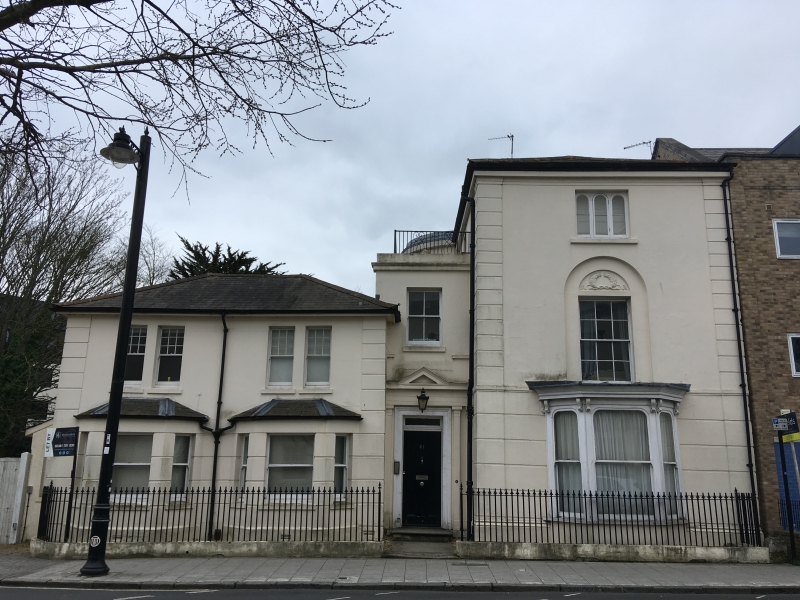 GV II
House. c1830-40, with late C19 extension on S side.
MATERIALS: Stuccoed brick with rusticated ground floor and quoins. Slate roofs. PLAN: Main house of 3 storeys and one bay, with recessed 2-storey entrance bay on S side. Internal plan of one front and one back room to each storey; this has been altered and subdivided above ground floor. Narrower two-storey closet extension to rear, altered and extended. Extension to S of 2 storeys and 2 bays.
EXTERIOR: Left hand of entrance bay partly obscured by extension. Pedimented entrance framed by pilasters. Later 2-over-2 pane sash above. Door with 2 long vertical panels; narrow rectangular fanlight. Later canted bay window to ground floor. First-floor window set within recessed arch with stuccoed wreath motif in the tympanum. 6-over-6 pane sash. Second floor window triple round-headed casements. Side (S) elevation: Rear part of first floor of entrance bay carries a semi-circular lantern which lights the main staircase. Behind this, on the flank wall of the house, is a 2-storey cantilevered bow carried on cast-iron columns with decorative spandrels; original curved sashes. Windows generally 6-over-6 pane sashes. Hipped roofs. The late C19 2-storey extension attached to the house on the SE side is not of special interest.
INTERIOR: To rear of entrance bay an elegant open-string geometric stair, lit by semi-circular lantern, leads from ground to first floor. Mahogany handrail terminating in spiral, square-section balusters and scrolled tread-ends. A separate stair leads from first to second floor, with mahogany handrail, square-section balusters and turned newels. Room plan is altered at first and second floor. Interior retains some original fire surrounds and joinery.
HISTORY: Oxford Street was built in the 1830s. No 61 once formed a pair with another house on the north side, now demolished. The building was occupied by the first Lady Mayor of Southampton, Lucia Foster Welch, who died in 1940.
SUMMARY OF IMPORTANCE: 61 Oxford Street is of special interest a neo-classical townhouse of the 1830s which retains original internal features of note. It also has importance as part of one of Southampton's few surviving Georgian streets. Group value with Nos 10-20 Oxford Street (qv). The late C19 2-storey extension attached to the house on the SE side is not of special interest.