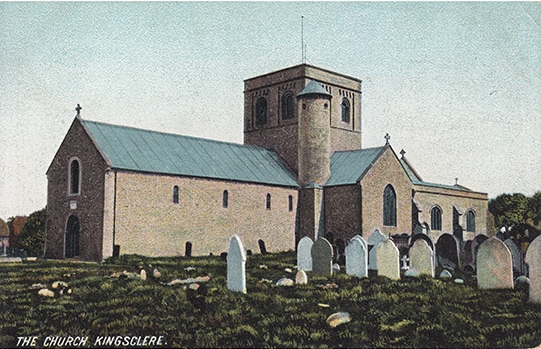 C12, C13, C15, with a substantial new construction and restoration by Hellyer and Ryde
of 1848. On the site of a Saxon minister, a large cruciform Norman church, with a
central tower, and a later south chapel. The restoration of 1848 accounts for the
re-faced exterior, the raising of the tower, and walling of knapped flint with stone
dressings; the details are 'Norman', with earlier fragments incorporated in the north
door (now filled). The west door has recessed stages with moulded arches on columns,
the south chapel has Perpendicular windows and stepped buttresses, the east window
having 'Geometrical' tracery. The inside is severaly plain, with deeply-splayed
'Norman' lights to the nave, and an Early English arcade between the chancel and south
chapel, having moulded caps. The table-top Purbeck font is C12 (with a modern base),
the pulpit is Jacobean, and the candelabra at the crossing is dated 1713. The chapel
contains brasses of 1503, 1519 and 1580, as well as a number of C18 and early C19 wall
monuments. The south transept has a donations board of 1830, and the tomb monument to
Sir Henry Kingsmill (died 1620), and his wife Bridget (died 1672); this comprises 2
fine alabaster effigies recumbant on a classical altar tomb, of black and white
marble. Unique weather vane. The setting of the church in the central green space is
important.