Church of St John the Apostle 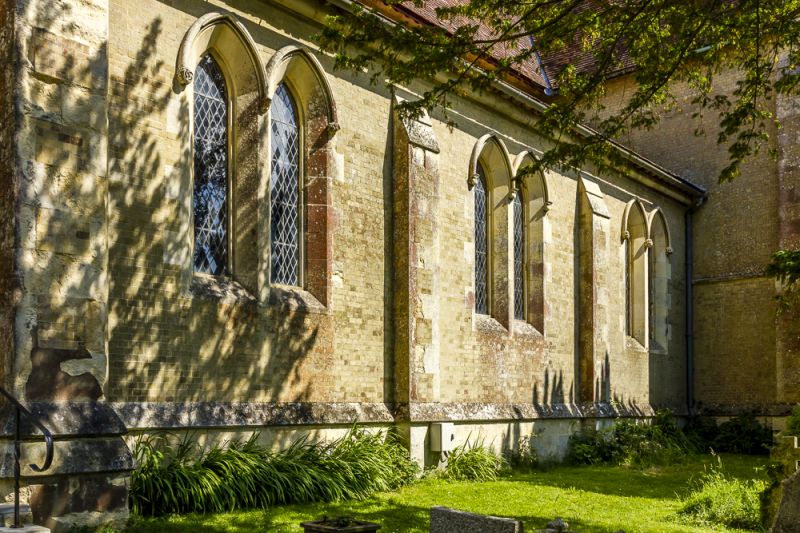 In the entry for:
MARCHWOOD MAIN ROAD
SU 31 SE
5/2 Church of St John
The Apostle
GV II
the serial number shall be amended to read:
5/39

Parish church. 1847 by J Derick, repaired after 1945. Yellow brick with stone
dressings, slate roof. Plan of chancel, nave with gabled transepts and south
aisles with south-west tower. Disproportionately tall church in style between
that of commissioners and Ecclesiological Early English. Externally, at east
chancel of 2 bays with angle buttresses on corners and flat buttresses between
bays, all with sloping at string level. Triple lancet with label and quatrefoil
in gable to east. Kneelered gable wall with cross. Lancet with label in each
bay. Machicolated eaves. To north-west bay low gabled vestry built out of
north transept, with large diagonally set corner stack and rectangular lancet
on each face. Nave has east kneelered gable wall with cross. Short north and
longer south transepts have angle buttresses with sloping steps at level of sill
string. Kneelered gable wall and triple lancet with label. South transept has
each side paired lancet with label. Nave has to north 4 bays with flat buttress
between them, having step at level of sill level string. In each bay paired
lancet with label, except single lancet to narrower west bay. To south lean-to aisle
of 2 bays with paired lancet in each and flatbuttress between. West end of nave has
angle buttress to north corner. 2-order pointed west door with label. Large
2-light plate tracery west window with quatrefoil in head and label. Quatrefoil
in gable and kneelered gable wall. South-west tower of 3 stages with broach spire.
Large clasping corner buttresses which step with stages. 2 south buttresses have
setback buttresses up to 2nd stage. North-west buttress has square-section,
pyramid roofed stair tower up to 2nd stage. Lowest stage has pointed 2-order
south door and tall lancet to west. 2nd stage has rectangular lancet to east and
west and lancet in gablet to south. Blind pointed arcade around top of stage on
all faces with unequal trefoiled arches to south. Top stage has plate tracery
2-light bell opening. Machicolated eaves. Stone spire with gablet on each face.
Inside scale is grand, but detailing oversized and heavy. Fittings all C19
originals Font copy of Tournai marble font in Winchester Cathedral. Stained glass
in east window Pevsner; Buildings of England; Hampshire; 1966; p 329.