A Grade II* Listed Building in Bramshott and Liphook, Hampshire 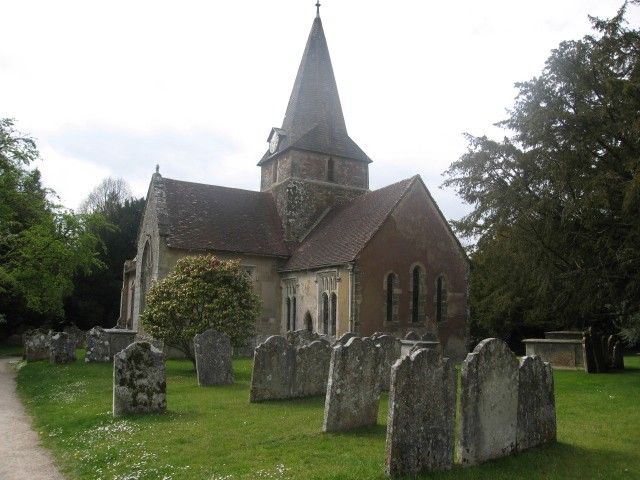 Parish church. Aisleless church of c.1220 with west? (now central) tower, north
and south transepts of c.1400 (aisleless nave replaced 1735), present nave of 1871
with 4 bays and aisles, and west porch (replacing former north porch). Walls of
sandstone rubble to the chancel, ashlar to transepts and nave, with stepped but-
tresses to the nave. The chancel has 2 lancets on the north side and triple
lancets to the east, with 2 Perpendicular (c.1500) windows on the south side: the
transpets have traceried Perpendicular windows in the east walls and gables, the
west windows having been absorbed by the c19 aisles. The aisles have coupled
traceried (C14 style) windows, and the west end of the nave has a high and large
curving triangular window containing a series of diminishing trefoils. The tower
has 2 stages and a shingled broach spire on a C15 timber frame. Interior: the east
end and crossing are as built, with C14 squints, with old king post roofing (tie
beams removed in the chancel), the north and south tower arches are C14 but the
east and west arches were raised in 1871. Within the 3 old units of chancel and
transepts, there are several wall and slab monuments, of the late C17 to early c19,
fragments of medieval glass (also in the porch), brasses, and a delicate small
classical font (c.1700). West of the tower everything is Victorian in a plain
Early English style, with a canopied Gothic pulpit of 1938, a canopied stall, desk
and lectern of 1951; at the west end is a C13 font, with a plain bowl on clustered
columns.