A Grade II Listed Building in Richmond upon Thames, London 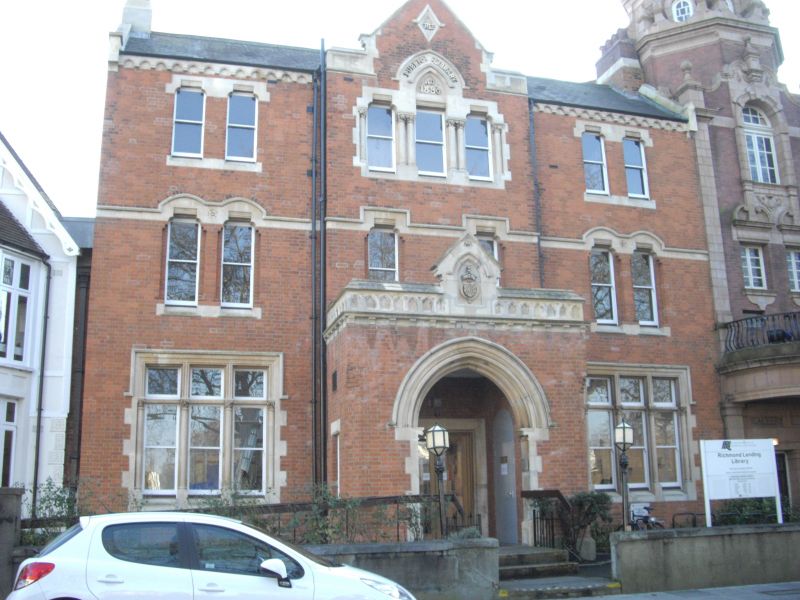 Library, now central lending library, built as Free Public Library. Dated 1880, opened 1881; extended 1886; minor C20 alterations. Frederick S. Brunton. Red brick, brown brick to side and rear elevations, and sandstone dressings. Slate roofs, rear range with glazed lights. Wooden sash windows. Shallow 3-storey front range with lower, gable roof range extending to rear. Gothic style.
EXTERIOR: Facade to Little Green symmetrical, of 3 bays and 3 storeys. Wide advanced porch in centre bay has pointed arch entrance with moulded architrave and imposts, slender hood, and quoins. Above this, corbel table and stone parapet with trefoil headed arches, and gablet with shield. To either side of porch, a large window under stone hood and quoined; slender colonnettes with stiff leaf capitals separate the 3 fixed lights over 3 sashes. Brick plat band below first floor that has paired sashes to outside bays and separated pair to central bay, all under continuous stone band cut square over each window and string course that forms a hood over each window. Similar windows to second floor, except at central bay where 3-part window, sashes divided by paired slender colonnettes with foliate capitals, the central sash under higher pointed arch with 'PUBLIC LIBRARY' in raised lettering following the arch and 'A.D. 1880' in tympanum. Stone Lombardic frieze interrupted by central brick gablet with stone impost and diamond plaque under hood with quatrefoil moulding and 'FREE' in raised stone lettering. Plain side elevations. REAR gabled elevation with gablet within which a tiny recess under red brick pointed arch. 3 tall lights under segmental red brick arches to either side of one-storey toilet block with two small sashes.
INTERIOR: FRONT RANGE with offices includes stair with chamfered balusters, web pointed arches between and small trefoil cut-outs. Two first floor studies, one with wood chimneypiece, one marble. Original library shelving and counters have been replaced with modern equipment. REAR RANGE of 7 bays, the central and rear bays are from the later-C19 extension. A central top-lit nave space with lower aisles divided by an arcade of slender cast iron columns, those to the north with stiff leaf capitals, those to the south with stylised capitals. Wide Tudor arches; spandrels with trefoil motif to corners. The ceiling is a deep cove with a continuous string course, above which pitched roof with continuous glazed panels to the apex. Ribs from each column follow the cove to a slender cross beam; the piers framing the central bay extend to much heavier beams with pediments above supporting the glazing.
SOURCES: The Builder March 26, 1881.

This is the earliest public library (opened 1879-81) in London still in use as such. It retains its impressive top-lit interior space framed by a cast-iron arcade, and its dignified Gothic facade.

Group Value with the Richmond Library to the west and the other listed buildings on the Green.