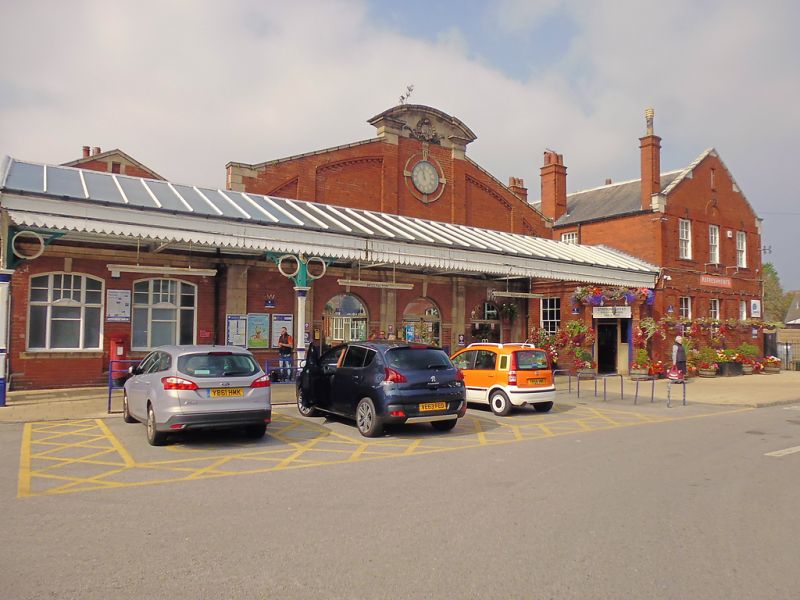 II
Railway Station constructed in 1912 to designs by William Bell for the North Eastern Railway (NER), with Refreshment Rooms of 1925, designed by Stephen Wilkinson in 1922.

PLAN:
This is a wedge-shaped building with its main entrance facing east. It has a large covered concourse with both through and terminal platforms under canopies to the west, with a range of single-storey offices running along the south and north and a two-storey Refreshment Rooms block to the north-east.

EXTERIOR:
The main facade has three gable-fronted ranges; offices are to the left, the concourse to the centre and the Refreshment Rooms to the right. All but the latter are spanned by a steel-framed glazed canopy supported by two cast iron columns with ironwork depicting the letters NER. The office gable end has two large three-light, multi-paned windows. The double-height concourse range has three round-headed arched entrances with modern doors. This range incorporates pilasters, with the central two rising to carry a small sandstone open-bed segmental pediment with the date 1912 and below this a roundel with the station clock. The two-storey Refreshment Room block has a projecting entrance porch with original double doors to its south and mostly original windows with six-over-six pane sashes and brick quoins to both floors. This block has two tall brick stacks to the left, while the concourse range has a small stack to its left. The south elevation is punctuated by sixteen segmental arched doors and windows with sandstone keystones, mostly unaltered save for some blocking. A brick dentilled cornice runs the length of the elevation and it retains four brick chimneystacks. The north elevation is much shorter but also largely unaltered. The single-storey range runs for six bays and is similar in character to the south elevation with two ridge chimneystacks, while the northern elevation of the two-storey Refreshment Room block is of six bays and retains its original sash and multi-pane windows, with a flat-hood porch entrance to the eastern bay. This has an additional chimney to its west gable end.

INTERIOR:
The concourse has an arched wood plank roof of five bays supported by light steel ribs with a large ridge skylight. The gable wall is panelled in three sections above the entrance doors. The open end of the concourse has been infilled with a late-C20 glazed screen wall. Beyond this it meets a steel and glazed roof across the platforms, with further glazed roofs stretching away down the platforms at a 90 degree angle, all carried on cast iron columns with Composite capitals. There is a footbridge with trussed purlins and renewed roofing leading to the north platform, which retains the only remnant of the 1846 station building.

The concourse and the south platform have large segmental arched offices looking onto them; all glazing is original multi-paned, while original doors have round, multi-paned windows. To the south-east corner of the concourse is the booking office, with sandstone window surrounds and Art-Nouveau signage above. Curved wooden handrails align with each window, supported on cast iron posts. The projecting entrance porch to the Refreshment Rooms sits to the north-east, with a curved flat-hood porch to its entrance with original door.

Internally, the offices on both sides of the concourse, as well as the public conveniences, have been largely modernised. Some original features such as cornicing and at least one fireplace survive, and the former washroom/messroom to the south has floor-to-ceiling glazed tiles with a dado and a blocked fireplace. Offices off the south platform as well as two rooms to the north were not inspected internally, although the original men's W.C. to the south is thought to retain its glazed bricks.

Internally, the Refreshment Rooms retain their original floor plan, with separate First and Second Class rooms with a servery spanning the two; this has a wood panelled counter with marble top and plinth. Both rooms retain their wooden bar backs with mirrors and glass shelving, although the glass to the First Class room has been renewed. The floor is terrazzo to the public rooms and wood block behind the counter. Both rooms have deep corniced ceilings and a picture and dado rail. Internal doors are original with multi-paned glazed panels and decorative architraves. The chimneybreasts to both rooms are flanked by two large wooden pilasters. The fire surround to the First Class room and integrated picture frames to both rooms are original features, however both fireplaces and mirrors are modern. The First Class room, entered through the concourse, has a glazed entrance porch with round-headed arches and original doors. The Second Class room, entered from the First Class room or the external porch, has an inserted glazed internal porch thought to date to shortly after the building's construction. The service area retains some panelled cupboards, while the remainder of the Wilkinson block was not inspected internally. The first floor currently houses a private flat; this appears to be its original use.

HISTORY:
Bridlington station was first opened by the York and North Midland Railway in 1846. However, the present station and new concourse is the result of a rebuilding by the North Eastern Railway in 1912 to designs by William Bell in order to cater for the large increase in excursion traffic. This created a new main façade facing east, forming the gable end of the concourse and re-using an 1893 canopy, re-sited from the platform.

The two-storey refreshment room block was designed in 1922 by NER's last serving Company Architect, Stephen Wilkinson. Construction commenced in 1925, the first year of the London and North Eastern Railway. This replaced a two-storey, two-bay building which sat in the same position, necessitating the 1893 canopy to be cut and fixed to the new building line and one of its columns to be removed. The building included both First and Second Class Refreshment Rooms with a servery spanning the two. A service area, ladies' First Class lavatories and a stair hall sat along the north of the building and a First Class ladies' waiting room to the west (now converted to offices). The cellar included in the original plans was blocked off during the late C20.

A portion of the Refreshment Room frontage was rebuilt using the original bricks due to damage following a train incident in the late C20. Internal alterations include the introduction of a draught lobby inside the Second Class room shortly after construction and the removal of fireplaces, although the original surround to the fireplace in the First Class room survives. The current tenant has made some sympathetic repairs and alterations, including the like-for-like replacement of glass shelving and wood panelling, blocking of an internal window, the insertion of period light fittings and the use of lyncrusta up to the dado.

Alterations to the remainder of the station building include the renewal of W.C. facilities and the modernisation of office spaces. In 2006 the former parcels and left luggage offices to the south of the concourse were renovated and converted into a Community Arts Centre, necessitating the insertion of partition walls and private W.C. facilities.

REASONS FOR DESIGNATION:
Bridlington Railway Station is designated at Grade II for the following principal reasons:
* Architectural: it is a fine example of Edwardian railway architecture with carefully detailed interior fixtures and fittings, designed by the notable railway architect William Bell
* Historic: it is a good example of the North Eastern Railway seaside stations built for the greatly increased excursion traffic in the early C20
* Rarity: the Refreshment Rooms are one of a very few such establishments nationally which retain their original internal arrangement, in addition to good quality fixtures and fittings