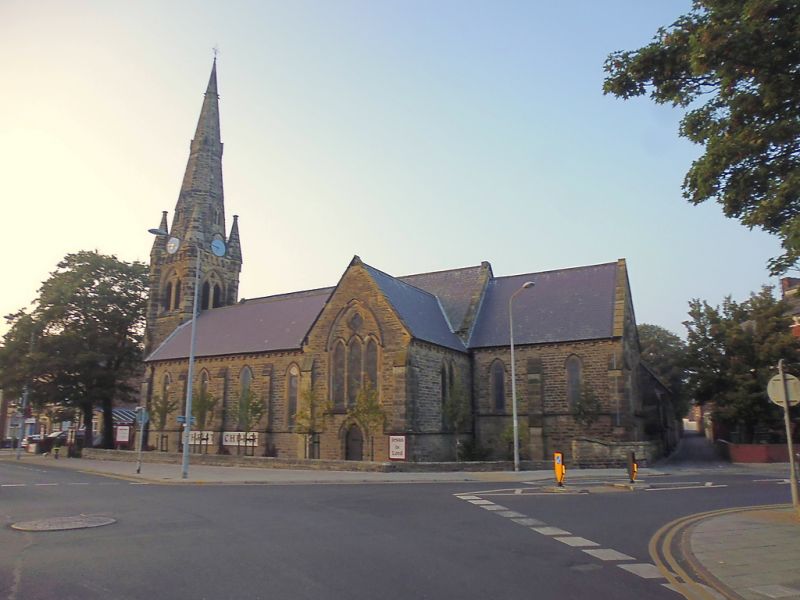 PLAN: Nave, chancel, N and S aisles, N and S transepts, SW tower, hall of 1884-5 abuts the N side of the chancel. An early 20th-century hall parallel to the nave on the N has been linked to the church by a 20th-century W end block and additional 20th-century accommodation is provided by further blocks to the N of the nave attached to the 1884-5 church hall; these ancillary buildings are of lesser interest.

EXTERIOR: The style of the church derives from Early English work of the 13th century. The SW steeple forms a prominent landmark in the town. Its tower is of four stages and has octagonal angle buttress widening at the belfry stage to large octagonal turrets with octagonal pinnacles. The tower has lancet windows and, in the belfry stage ones of two lights with plate tracery. The tall spire has two tiers of lucarnes. At the E end the chancel has moulded string-courses at window sill level. The E window consists of three graded lancets with hood-moulds ending in carved terminals. The S transept has paired lancets in the E wall and a three-light plate-tracery window in its S face. Both aisles have lancet windows which were probably reused when the aisles were widened. The nave W window has a 1-2-1 rhythm with the central, two-light opening having an uncusped circle in its head. The 1880s church hall projects slightly forward of the E wall of the chancel. It is also in the lancet style and has a shallow gabled porch with a chamfered doorway with a date and inscription.

INTERIOR: The walls are plastered and whitened and, regrettably, all the internal stone work has, been painted. At the E end of the nave the chancel arch has semi-circular responds with a fillet. Between the nave and aisles are tall three-bay arcades with octagonal piers with moulded capitals and double-chamfered arches. There are wide double-chamfered arches into the transepts which have moulded timber wall-plates and canted plaster ceilings. The interior is dominated by the 1960s vaulting in the nave and aisles, described by Neave and Pevsner as `in an egg-box style by George Pace.' The chancel roof has also been altered with a plain plaster vault with a classical wall-plate and two arch-braced trusses (these may by 19th-century) on timber posts with classical detail.

PRINCIPAL FIXTURES: The most notable items are a 17th-century font and 18th century font cover transferred here from York Minster in 1947. The font has a shallow, gadrooned circular bowl and is made, like the base, from Frosterley-type marble. The stem is of veined brown marble. The octagonal baroque cover has a central baluster with serpentine timber brackets carved with acanthus motifs, tapering up towards the figure of a dove, There is a W gallery with pierced Gothic arches over panelling. At the E end the 1924 reredos by Walker, Son and Field has blind tracery and a central carving of the Last Supper flanked by statues in niches: the chancel is lined with panelling to match. The polygonal timber pulpit is of the c1950s, designed Francis Johnson (a noted late Neo-Classical architect), and rests on a wine-glass stem: above is a sounding board. Loose 20th-century chairs have replaced the Victorian bench seating. There is stained glass of the late-19th and to mid-early 20th centuries: three windows by J W Knowles, S transept 1898 and 1906, N transept 1908; chancel N, 1902 by Arthur L. Moore; chancel S 1957 and 1962 by Francis Spear.

HISTORY: In the late 1830s concern was expressed about the lack of established church accommodation in Bridlington. A printed notice dated 20 August 1838 (in ICBS file) noted that the population in 1831 had been 5,405 and that the parish church could only accommodate some 1,000 people. `The population of the Township of Bridlington-Quay,' it noted, `amounts to nearly 2000, exclusive of the Visitors in the Summer, many of whom being Invalids are unable to walk to the Parish Church, at the distance of a Mile.' It announced that the site for a new church would be given: the donor was John Rickaby. The new church was eventually built in 1840-1, being consecrated by the archbishop of York on 30 September 1841. It had sittings for 611 people.

The architects: George Gilbert Scott (1811-78) began practice in the mid-1830s and became the most successful church architect of his day. Often criticised for over-restoration, his work was in fact usually very respectful of medieval buildings, while his new churches generally have a harmonious quality which so often derived their character from the architecture of the late C13 or early C14. He also designed a number of very important secular buildings, for example the Albert Memorial and the Midland Grand Hotel at St Pancras. He was awarded the RIBA Royal Gold Medal in 1859 and was knighted in 1872. He is buried in Westminster Abbey. Between 1835 and 1844 G G Scott was in partnership with William Bonython Moffatt (1812-87), a pupil of the London architect James Edmeston under whom Scott also trained. Moffatt did design buildings on his own account but, generally, did not bring much to the partnership. The partnership was dissolved in 1844.

The interior was transformed markedly in the early 1960s by the York-based George Gaze Pace (1915-75), one of the most successful church architects in the mid-20th century. Pace had a great knowledge and love of old church architecture but was not afraid to introduce features in a distinctly modern idiom, hence the `egg-box' vaulting at Christ Church. The anicillary buildings linking the church, and older parish room were designed by Anthony Blackmore in 1992.

REASONS FOR DESIGNATION:
Christ Church, Bridlington, is designated at Grade II for the following principal reasons:
* It is of special interest as an early Victorian Gothic Revival church that is among the early works of G G Scott (and his then partner W B Moffatt).
* It was progressively extended in sympathetic style to form a notable landmark in Bridlington with the steeple being a particularly prominent feature.
* It is also of interest in including distinctively 1960s work by George Pace, a noted mid-20th-century church architect.