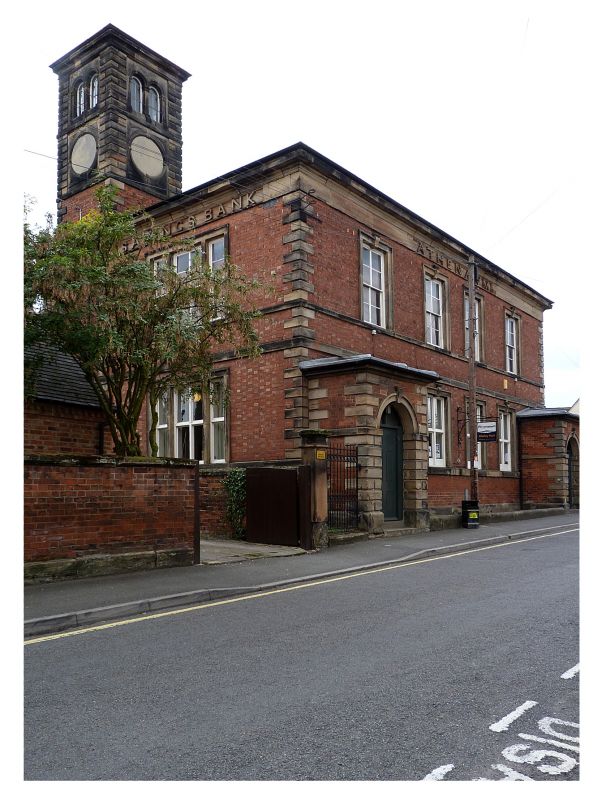 SK 38/3925 PARISH OF MELBOURNE POTTER STREET
6/159 (South Side)
Wesley Hall
GV II
Savings bank and Athenaeum, now Wesleyan Hall. 1853-4 by
H I Stevens of Derby in Italianate style with minor later
alterations. Red brick with stone dressings and plinth,
rusticated stone quoins and wide plain first floor stone band
with similar ground floor sill band and narrower first floor
sill band. Hipped slate roof with moulded stone cornice Two
storeys and four bays with tower attached to south east corner.
Main elevation has advanced single storey porches to either side
also with hipped slate roofs, rusticated quoins and moulded
cornices. Each porch has a semi-circular headed doorcase with
rusticated jambs, moulded arch with console keystone, continuous
raised impost bands and a flush panelled door below divided
overlight. Between the porches there are four windows in
moulded surrounds, plus console keystones, with timber cross
windows. To the centre there is an elaborate late C19 ironwork
bracket carrying wooden sign. Above there are four, more widely
spaced, plain sashes in similar surrounds. Above again is the
deep band at the base of the cornice, there is a recessed panel
with 'Athenaeum' inscribed in raised capital letters. Similar
windows to west gable wall with 'AD 1853' inscribed in the
cornice. Similar tripartite sashes in moulded surrounds to east
gable wall with 'SAVINGS BANK' inscribed above. Attached tower
in similar style except two top stages which have rusticated
corner pilaster strips and central panels with blocked circular
keystoned openings to lower stage and twin semi-circular headed
windows above to each side with a moulded cornice over.
Interior is very plain with C20 fittings. The building was
opened by Viscount Palmerston, Prime Minister to Queen Victoria
between 1855-1858 and 1859-1865 who also laid the foundation
stone.