A Grade I Listed Building in Elvaston, Derbyshire 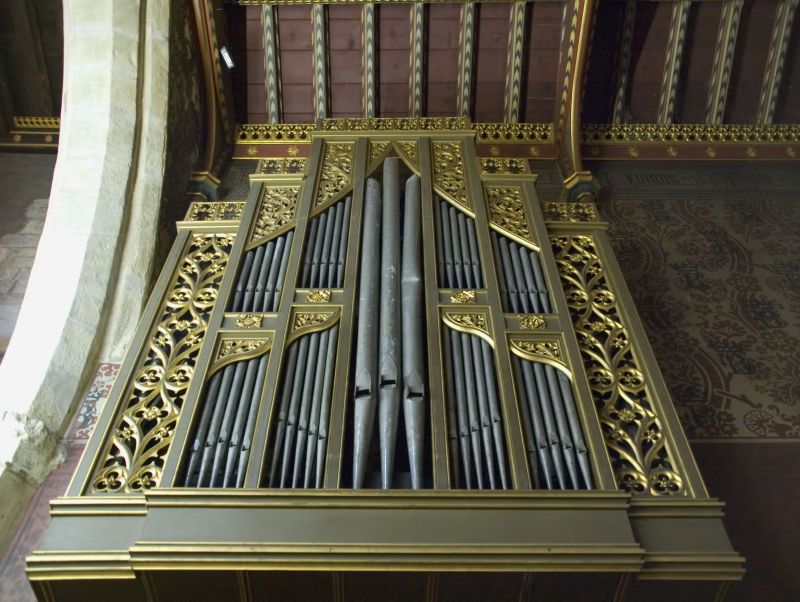 GV
I
Parish church. C13, C14 and C15, with money provided by Lord Mountjoy of Elvaston for the completion of the church in 1474, also with early C18 addition and chancel restored and extended by Bodley in 1904. Ashlar and coursed squared stone with shallow pitched copper roofs, plus moulded stone copings to gables. Clerestoried nave with south aisle, north chapel and vestry, chancel and large west tower.

Three-stage C15 ashlar tower has full-height clasping buttresses with gableted first step, a deep moulded plinth and chamfered bands between the stages. West elevation has a deep moulded four-centred arched doorcase with a lantern over and small shields to either side of the jambs. Above there is a large three-light panel tracery window in a deep moulded segment headed surround with hoodmould. Second stage has a small chamfered louvred opening to west and two similar to south, one over the other. Bell stage has similar facades to all sides, each with odd tapering pilaster strips to sides and a large louvred bell opening, made up of two tall pointed two-light openings with central transoms and cusped tracery, set below a continuous ogee headed hoodmould with a large gargoyle finial. Over the gargoyle is a plain pilaster strip which rises up into the parapets, between the pilaster strips to either side there is a coved eaves string course. Embattled parapets above have crocketed corner pinnacles with gargoyles to the base of each.

North nave elevation has two pointed three-light cusped panel tracery windows with straight sided arches and two smaller similar two-light windows above. Between the windows is a stepped buttress and beyond to east there is an early C18 addition with a double transomed two-light flush mullion window to west side. Beyond to east is a low single-storey c1904 vestry with a pointed moulded doorcase, plus hoodmould, to west and two three-light flat-headed windows to east with cusped pointed lights and incised spandrels. Similar two-light window beyond to east with angle buttress to the corner and another similar two-light window to east elevation. All windows, except the eastern window, are linked by a continuous hoodmould. Plain parapets with ridgeback copings and blank clerestory wall above.

East bay of chancel is a c1904 addition and has a three-light geometric tracery window with hoodmould to north and south sides. East elevation has gableted buttresses to either side and a wide central buttresses with Christ below an ogee headed canopy, above. To either side there are crocketed ogee headed niches with the figures of saints in. South chancel elevation has the c1904 window to east with a gableted buttress, a three-light four-centred arched window with trefoil headed lights and a large stepped buttress to west. Above the latter two openings is an odd piece of string course. Beyond to west the nave has a C13 aisle which has a two-light four-centred arched window with panel tracery to east face, and two C13 intersecting tracery three-light windows with carved label stops to hoodmoulds to south face plus a continuous sill band. South aisle also has clasping buttresses to either corner and to west of the south face, a gabled porch with pointed outer doorcase on attached shafts with moulded capitals, plus small lancets to either side and a small C13 inner door with hoodmould. West wall of aisle as a single lancet. Above there are three similar two-light windows to those to north clerestory.

INTERIOR: has a three bay south arcade with pointed double-chamfered arches on octagonal piers with moulded capitals. Similar style chancel arch on polygonal responds with a further moulded arch to east end of chancel into the 1904 bay. Tower has a very tall deeply moulded arch and to north side of the nave there is a wide depressed segmental arch with raised keystone into the chapel. Northern windows and southern clerestory windows all have inner roll mouldings.

Nave roof is a well restored cambered C16 roof with moulded tie beams and gold leafed bosses, also with C19 cornice to edge with gold star motifs. Similar roof to south aisle. Chancel has a painted 1904 pointed roof, also painted north wall with small pointed stone doorcase to centre and a moulded 1904 door to east. East wall of the chancel has a full-height carved and painted stone reredos with the figures of saints set in crocketed ogee headed niches to top and painted shields below. To either side of the altar there are carved wooden seats, that to north c1904 in Decorated Style, and that to south of similar date but with re-used C14 bench ends. The choir stalls are in similar style with carved poppy heads and bench ends, these probably also date from 1904. Above the northern stalls there is an ornate C19 organ set into the wall and on the southern side of the chancel there is a rough ogee headed piscina. Across the chancel arch there is a fine medieval rood screen with crocketed ogee headed open panels to top with panel tracery over, also with C19 cross; in similar style to centre. Similar, less elaborate screen enclosing former chantry chapel to east end of south aisle, with a Jacobean family pew inserted later. This has panelled sides and small doors with pierced fan-like tops, also rampant lion finial to western corner. Hanging from the ceiling above there are two large carved flying wooden angels. The nave has an octagonal carved wooden pulpit to north side with ogee headed crocketed panelled sides and an octagonal tester above. The pews have linenfold carving to bench ends, these and the pulpit both date from the 1904 refurbishment. To the west end of the nave the tower arch has a C19 screen, a copy of that across the chancel arch, and above there is a large painted and carved organ. The stone font in the tower has a moulded octagonal base and stem with a circular bowl over, and a C20 cover. West wall of the nave has a bracketed painted stone charity plaque with steeple finials to top and a brass plaque to centre, dated 1621. Below is another brass plaque of 1821 noting the reorganisation of the funds from the above donation. Below again is another brass charity plaque, dated 1648, recording the donations of Elizabeth Wilcocks. To the south wall of the aisle there is a painting by Pasinelli, of 1693.

There are a large number of wall memorials and tombs including some very fine ones. To the west end of the nave there is a slate and white marble memorial to Henry and Margaret Robinson who both died in 1829 and to the north wall of the nave there is a white marble wall memorial with a weeping figure below a carved pediment, to Charles, third Earl of Harrington who died 1829, by Canova, one of only three in England. Beyond to west the C18 chapel houses a large white, grey and black marble memorial to John Stanhope to centre, a c1898 wall memorial with gothick stone aedicule to Elizabeth, Countess of Harrington and two painted plaques recording all the passed clergy. The monument to John Stanhope is most impressive and has an elaborate sarcophagus base with a recumbent, armour-clad figure looking forward leaning on his elbow, to top. Behind there is a deep base of black marble with the corners breaking forward, topped by pairs of gadrooned urns, over which there is a large wall plaque with moulded open pediment and a central shield with Latin inscription recording that the monument was erected to John Stanhope who died 1638, and was restored by Charles Stanhope in 1731. Both the monument and the elaborately moulded plasterwork ceiling cornice all look c1731. In the south chapel there is a white marble chest tomb to Leicester Stanhope who died 1862, with painted shields to either side of a long inscription to the base and a life size effigy over clad in uniform of a soldier. Above there is an alabaster wall memorial to Talbot Stanhope who died 1915. To south side of the chancel there is an unusual wall memorial to Seymour Hyde, third Earl of Harrington, who died 1866, with his figure set in a crocketed canopy, all in enamelled inlaid brass. Also to south side of the chancel is a chest tomb by Westmacott to Algernon Stanhope, who died aged 9 in 1847. The base has painted shields to either side of a central inscription and above there is the marble effigy of the boy. Opposite there is a magnificent painted marble monument to Sir John and Lady Catherine Stanhope, erected by Lady Stanhope who died in 1610. This has a deep moulded base with a semi-circular headed niche above with a coffered ceiling. To either side of the niche there are pairs of attached Corinthian columns and above there is a wide ovolo moulded frieze, which breaks forward over the columns, with a large central achievement above plus corner finials. The niche houses the painted effigies and behind them there is strapwork decoration around a central plaque.

Eastern bay of the chancel has a brass plaque to Charles and Dorothy Prodgers who erected the extra bay in 1904 and furnished the nave and chancel. The nave has two simple stone floor slabs to Jane Crawford and her daughter, who died in 1794 and 1791 respectively.