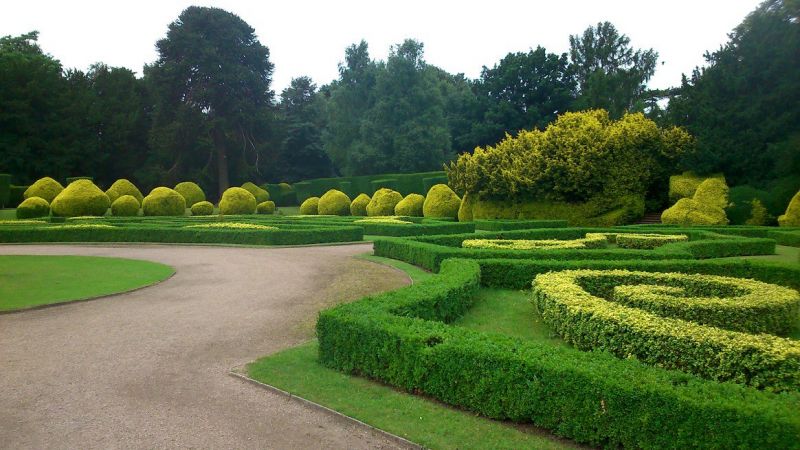 SK 43 SW PARISH OF ELVASTON BORROWASH ROAD
2/15 (West Side)
2.9.52 Elvaston Castle
GV II*
Country house, now part of country park. 1633 and early C18,
with major refashioning in Tudor style by James Wyatt of c1817,
completed after his death by Walker and east front of c1830 to
1840, probably designed by L N Cottingham, plus C211 alterations,
including demolition of north-west wing in 1970. Built for the
Earls of Harrington. Ashlar with stone dressings, except 1633
bay to east of south front which is of red brick with stone
dressings and flush quoins, and north-west corner of the
building which has been rendered. Shallow pitched slate roofs
with brick stacks hidden behind embattled parapets with
ridgeback copings over coved eaves stringcourse. Three storeys
and seven bays by nine bays. Seven bay south front, designed by
Wyatt, incorporating one bay of 1633 house, has wide flanking
bays and five recessed central bays with an advanced central
porch. This has a moulded four-centred arched doorcase, with
carved spandrels and returned hoodmould with carved labelstops,
flanked by stepped angle buttresses with blind panelling to
upper parts which rise above the parapets to form small
castellated turrets. Coved stringcourse and embattled parapets
with blind panelling over. To either side, the porch has blind
pointed windows with returned hoods and inside it has a rib
vaulted ceiling plus a pointed inner doorcase with double glazed
doors and cusped fanlight. To either side of the porch there
are pairs of tall recessed and chamfered cross windows with
cusped headed lights, incised spandrels and returned hoodmoulds.
Five similar smaller windows above, without transoms. Western
bay is C19 and has full height octagonal turrets to each corner
with cornices at first floor level, narrow slit windows above
and castellated tops. Ground floor has similar 3-light mullion
window. Above there is a canted oriel window with frieze of
cusped blind panelling to base and top, cusped headed 2-light
window to front with similar single light windows to sides, and
a lapped stone roof with crocketed corner finials. Above again
there is a central 2-light window, similar to those to central
bays, flanked by similar blind single light windows. Eastern
bay, of red brick, has two storey canted bay window with ovolo
moulded 4-light mullion and transomed window to front and
similar single light windows to sides plus returned hoodmould.
To centre of the sill there is a corbelled stone sundial. Above
there is a similar taller window with stone roof carved to
simulate tiles, over which is a carved frieze dated 1633 with
returned hoodmould over. Above again there is a 4-light
recessed and ovolo moulded mullion and transomed window with
dripmould. All C17 windows have leaded lights and some have C17
glass. Parapets have been continued up in stone above the C17
gable and eastern corner has C19 octagonal stone turret similar
to those to western bay. Nine bay east front, probably by
Cottingham, has continuous sill stringcourses to upper floors,
stepped corner turrets, similar to those on south front, and
three taller central bays advanced. Central bay has a two
storey canted bay window, with plain sashes in moulded surrounds
with cusped top corners, and moulded cornice plus panelled
frieze above. To either side there are four plain sashes in
similar surrounds with returned hoodmoulds. Above there are
four similar windows to either side of the canted bay window,
which has similar sashes to those below. It also has embattled
parapets with raised central piece, decorated with Harrington
crest, over a moulded cornice with ball flowers and corner
gargoyles. Above again there are nine similar, smaller sashes.
Centre bays have plain frieze above with three panels carved
with heraldic devices, and a blind cusped panelled frieze above
again. Embattled parapets over are flanked by small castellated
turrets and have stepped central section crowned by a rampant
lion finial and decorated with a Harrington achievement.
Attached to north side of this elevation is a lower wing which
has 2-light recessed and chamfered mullion windows with four-
centred arched light and returned hoodmoulds. Similar windows
to north and west elevations, except rendered part which has
plain recessed and chamfered C17 style windows. Interior has
C17 panelling to two eastern rooms on ground floor, that to
centre with a splendid three tiered gilded overmantle, decorated
with strapwork, coats of arms and painted figures. Gothick
Hall, by James Wyatt, has rib vaulted ceiling supported by
clustered and columns with foliage capitals, and wall niches
with cusped crocketed canopies, also with traceried doors and
wall mirrors and a large stone fireplace in similar style. The
whole room is richly gilded and painted in gothick style. The
main hall is c1900 in C18 style with pedimented doorcases, metal
balustrade to cantilevered stone staircase and a panelled
ceiling with central lantern. South-east room , behind 1633
facade, has C18 panelling with dado rail and carved cornice. In
the room above there is C17 panelling and there its more C18
panelling to other first floor rooms. Upper south-east room has
ornate plasterwork in the 1633 canted bay window. Above the
Gothick Hall is another Gothick style room. Kitchens to north-
west corner have a massive medieval style hooded fireplace and
four-centred arched cupboards and doors. Upper rooms have all
been gutted. Over the main hall above the lantern is a late C19
cast iron orchid house with decorative pierced iron trusses and
a C18 style balustrade with the initial 'H' to each of the
panel. Sources see Derbyshire Life and Countryside, Vol 28,
Issue 1, Pg 36, and Vol 35, Issue 2, Pg 34 and County Life,
January 1899.