A Grade I Listed Building in Etwall, Derbyshire 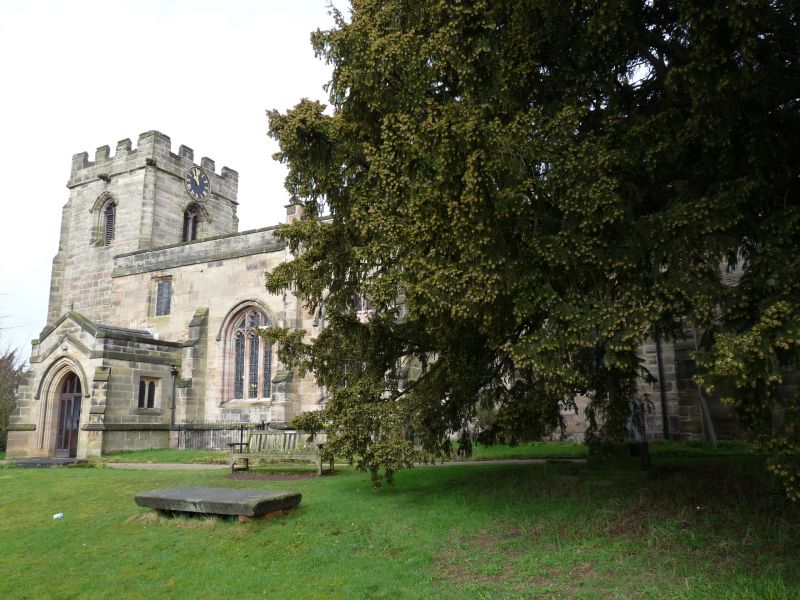 East elevation of chancel has central three-light cavetto moulded window with stepped four-centred arched lights set in triangular headed recess, and gableted buttresses to either corner. Above central window to either side are single light recessed and chamfered C17 windows with four-centred arched lights. South elevation of chancel has three two-light cavetto moulded mullion windows, again with four-centred arched lights and incised spandrels, set in flat headed cavetto moulded recesses, that to west lower than the other two. Between the windows are two gableted buttresses and to central section is a small chamfered four-centred arched door with incised spandrels. Beyond, to west, the nave has two three-light panel tracery windows in deep cavetto surrounds with hoodmoulds, to either side of both are stepped buttresses. To west is the 1882 south porch with moulded pointed doorcase, flanked by diagonal buttresses and above the porch is a C17 recessed and chamfered clerestory window with leaded lights. Inner doorcase is C12 with semicircular head and has good panelled Jacobean door with shell motif.

INTERIOR: has three-bay north arcade, two western bays, C12 with semicircular arches on columns with scalloped capitals, eastern bay with tall double-chamfered pointed arch resting on C12 respond to east. Chancel arch is C19 and spans full width of chancel with soffit moulding on columnar corbels, similar C19 arch through to north chapel from aisle, and from chancel to north chapel. To east of the latter is a lower, possibly early C19 four-centred arch, through from chancel to chapel, acting as a canopy to the tomb of Sir John Port, with cusped panelling to soffit and seat to west side. Tower has a tall, double-chamfered C15 arch, to south side of which is a projecting staircase. All roofs are C19, that to nave with pierced cusped panelling filling the trusses.

Nave pews, choir stalls, altar and reredos all early C20, chancel furniture with cusped panelling. North chapel has splendid set of 1635 stalls and pulpit, provided for the almsmen. Seats have semi-circular headed panels with strapwork friezes above. Pulpit in similar style dated 1635. To east end of north chapel is a flat headed window with cusped lights, through to the north vestry, which is in Strawberry Gothic Style. It has ogee headed doors with flame finials to architraves, foliage bosses to ribbed ceiling and Gothic Style wall memorials to two of the Cotton family. Nave has white marble octagonal pulpit with coloured marble columns and C15 octagonal font with C18 pine cover. Chancel has an unusual C13 stone lecturn built into the north wall and small arched piscinas to either side of the altar.

Numerous monuments, including many to the Port family. To south side of chancel is the tomb niche of Sir John Port who died 1557, which has brasses to the family to the back of the flat-headed niche and finely carved frieze above and base below. Adjacent to east is a marble slab with incised Latin inscription of 1698 to Johannis Jacton and to west is a similar slab set into the wall, with incised figure of lord and lady with Latin inscription to edge, dated 1503. To the north side of the chancel is a similar slab with its brass missing, there are also two classical slate and marble wall memorials, one to Mary Mainwaring of 1741 and the other to Rebecca Beer of 1829. To the west, between the chancel and chapel is the tomb of another Sir John Port, who died 1541. His effigy, flanked by those of his wives are carved in sunken relief leaving a raised border and central band across their figures. The canopy (mentioned earlier) has carved, spandrels, embattled frieze over and painted coats of arms. In the north chapel is another C16 marble slab set into the wall with Latin inscription to edge, above this is an early C19 wall memorial with relief arcade and scrolls within, to Elizabeth Cotton and Joseph Green. There is another memorial to Cotton family in the north aisle, which has hawk crest to top. Both aisle and the nave have several other slate and marble memorials, the most notable being that to Jacob Cheetham of c1740, with flat obelisk top and Latin inscription.

Four undated hatchments above arcade and one of 1805 over the tower arch, also a small painted charity plaque to north of tower arch. Chapel has two painted coats of arms in cartouches. Stained glass windows all mid or late C19, with the possible exception of shields in the windows of the north chapel.