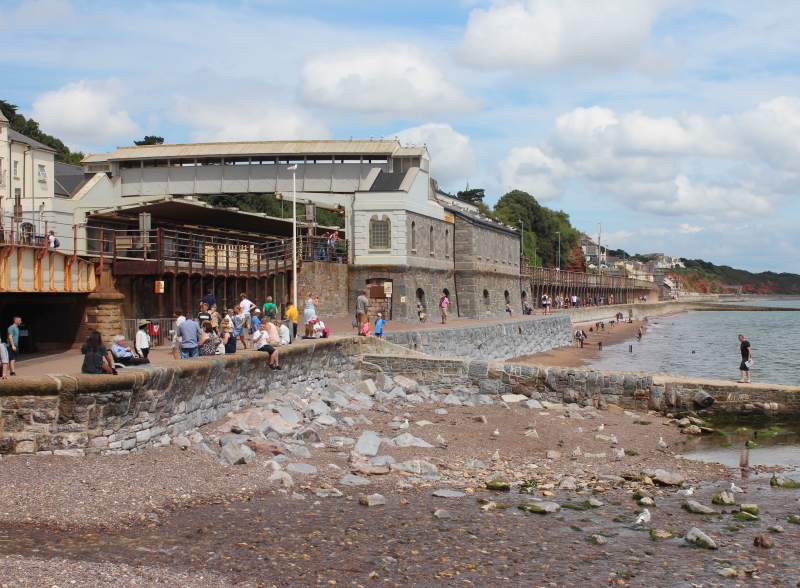 A railway station, opened in 1875, built in an Italianate style for South Devon Railway, on the site of an earlier station building destroyed by fire. The platform canopies were replaced in 1961 and the footbridge in 2013.

A railway station, opened in 1875, built in an Italianate style for South Devon Railway, on the site of an earlier station building destroyed by fire. The platform canopies were replaced in 1961 and the footbridge in 2013.

MATERIALS: the upside platform (west) range is faced in rusticated stucco and the downside platform (east) range is partially faced with granite. Both buildings have a combination of hipped slate and flat roofs.

PLAN: two parallel station ranges and platforms, orientated north-east to south-west. Both ranges have rectangular, stepped footprints. The buildings are connected at the southern end by a footbridge.

EXTERIOR: the two-storey upside (west) platform building faces Station Road. The main (west) elevation is stepped. At the southern end is a canopy, carried on quatrefoil-decorated, cast-iron cantilever trusses, that covers the footpath and leads up to the main entrance. The windows on this elevation are grouped, from south to north, as follows: four, four, three (full-height windows), five and two. The ground-floor openings are a mixture of square sash windows and archways, some blocked. The first-floor sash windows are topped by rounded arches with central, stucco keystones. At the centre of the elevation, the three full-height windows light the booking hall. The south elevation is a rusticated-stucco single bay. To the north is a mid-C20 extension containing a guards room, and the original rusticated north elevation, including the sash windows, has become an internal wall.

The parallel downside (east) platform building faces the sea on its east side and stands on top of a battered stone base. To its lower level the battered stone wall is punctuated by recessed-arched seating alcoves. Above this is a granite faced single-storey platform building with, from south to north, a three- and five-window arrangement. The northern return of the stone base extends slightly beyond the platform building. The southern return has a large blocked opening in the stone base and a rusticated-stucco single-bay floor above. To the south, the overhanging platform at this end is carried on a row of decorated cast-iron columns.

Mid-C20 angled, cantilever canopies cover the platforms. The main span of the covered footbridge bridge was rebuilt in 2013 in fibre-reinforced plastic.

INTERIOR: (public areas only inspected, 2017). The booking hall has a coffered ceiling with a central star-shaped boss, and there is a mid-C20 booking office to the northern side of the room. A cafe is located in the former parcel office at the southern end of the building. Further rooms, now used for storage, are located beyond the booking office to the north. A set of stairs lead up to the platform and a waiting room which contains a blocked fireplace. At the northern end of this floor are the toilets, and a staff area located in the mid-C20 extension. At the southern end are former waiting rooms, now used as staff areas. The pedestrian bridge is accessed by internal dog-leg stairs with timber handrails at the southern end of each platform building. The downside platform range contains a series of waiting rooms and toilets with blocked fireplaces; these rooms are no longer in use.

The Plymouth, Devonport and Exeter Railway Company was formed in 1840 to establish a railway line between Exeter and Plymouth. In 1843 the name was changed to the South Devon Railway and Isambard Kingdom Brunel was appointed as engineer. In 1844 the South Devon Railway Act was passed, authorising the construction of a single-track, broad-gauge line.

The proposed route included a stretch along the coastline between Dawlish and Teignmouth, between the sea and sandstone cliffs, which required a series of tunnels to be cut through the protruding headland. The line had to negotiate several steep climbs and changes in gradient and Brunel’s plan to deal with this landscape was to adopt an experimental system of atmospheric propulsion. Known as the Atmospheric Railway, it was developed by Samuel Clegg and Jacob and Joseph Samuda on the Dalkey Railway in Ireland in 1844. It used a combination of partial vacuum and atmospheric pressure. Instead of a traditional locomotive engine, stationary engines were placed in pumping stations along the line, extracting air from vacuum pipes laid in the middle of the track. Brunel first used the system in 1844 on a five-mile stretch of the London to Croydon Railway. Despite criticism of the system from various contemporary engineers he also recommended it for the South Devon Railway. The first section of the line opened in May 1846; however, the atmospheric vacuum pipes had not been completed, and initially, a steam locomotive was used. The first atmospheric train ran in 1847; although only between Exeter and Teignmouth. Ultimately the railway suffered from defects, including the deterioration of the leather seals on the vacuum pipes. In 1848 the atmospheric system was abandoned and the line was converted to conventional steam locomotion.

In 1876 South Devon amalgamated with the Great Western Railway, and in 1884 the section of track between Teignmouth Old Quay and Smugglers Lane was doubled. In 1892 the line was converted from broad to standard gauge. Between 1902 and 1905 the section between Smugglers Lane and Dawlish Railway Station was also made into a double line.

The first railway station as Dawlish was opened 1847 as part of Brunel’s design for the line. It consisted of a timber building along the upside (west) platform with a goods shed beyond. In 1872 plans for a new station building were drawn up. In 1873 the timber station was destroyed by fire. The new station was opened on 12 April 1875 with a building on each platform connected by a footbridge at the southern end. The downside (east) platform range included a signal box at the northern end. This was demolished in the early C20 and replaced by a detached signal box to the north of the station. A set of stairs that led from the downside platform to the beach below have been bricked up. The upside platform range was extended to the north in the early C20, with further extension in the mid-C20. In 1937 the main span of the footbridge was rebuilt using serviceable girders removed from the original Park Royal and Twyford Abbey tube station in London. Subsequent alterations include the replacement of the original gable platform canopies in 1961; the demolition of the goods shed in the late C20; the demolition of the signal box in 2012; and the replacement of the main span of the footbridge the following year. In 2014 sections of the station platform surface were repaired following a major storm.

Dawlish Railway Station, opened in 1875, is listed at Grade II for the following principal reasons:

Architectural interest:
* the station’s strong Italianate design makes good use of contrasting stucco and granite, creating a unified appearance across both platform buildings;
* thoughtful consideration has been given to the appearance and prominence of the station on both the town and seaward side;
* externally, the mid-C19 elevations have survived well despite later extensions;
* key internal features, including the booking hall’s distinctive coffered ceiling, have been retained.

Historic interest:
* it demonstrates the continued significance of, and investment on this important south-west transport link.

Group value:
* it forms a good group with other nearby listed structures, including the late-C19 Jubilee Bridge (Grade II) and the buildings that face onto York Garden, a public park which runs from the centre of Dawlish to the sea front.