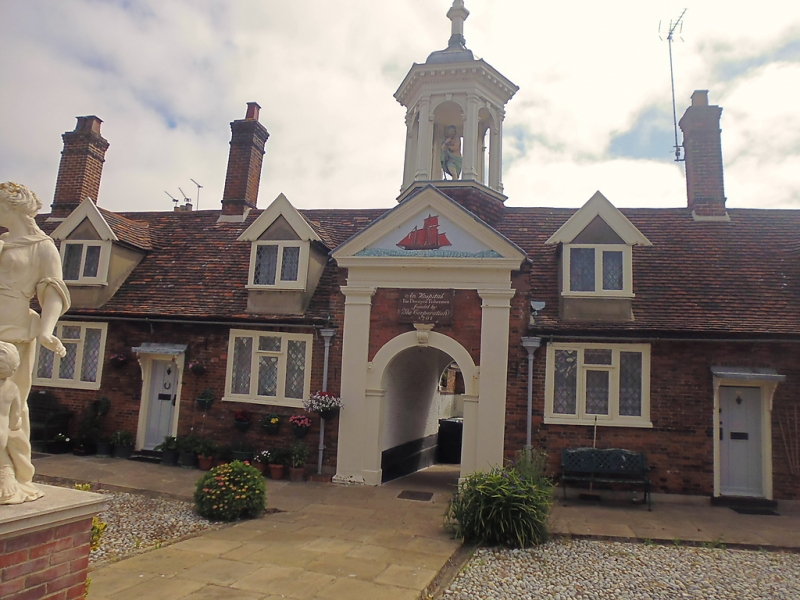 Home for decayed fishermen. Built by the corporation in 1702;
restored 1929-30 by FRB Haward and 1985-6 by Wearing, Hastings
& Brooks, architects. Interiors refurbished 1989. Red brick
laid in Flemish bond, with burnt headers and ashlar quoins.
Plain-tile roofs. The plan is of 20 houses laid out round all
four sides of a courtyard, the 20 houses reduced to 10 in 1959
EXTERIOR: one storey and dormer attic. The end gables of the
north and south wings have Dutch gables and large oval
inscription plaques surmounted by cartouches under segmental
hoods. To the south the plaque lists the 1702 regulations, to
the north benefactors of 1765-1915. Two further Dutch gables
terminate the ends of the entrance wings, which have 3 bays
right and left of the gates: three 3-light casements with
leaded glazing, replaced in the C20 and fitted with shutters.
2 gabled dormers in the roof fitted with 2-light leaded
casements. One further 2-light leaded casement in the apex of
the gable end. The north and south external returns are quite
plain with just 3 casements at their east ends. Opposite the
entrance is an archway to the rear with a pediment on Doric
pilasters. Within the pediment is a plaster relief of a barque
sailing backwards. Above this, on the ridge of the roof, is a
hexagonal lantern with arcaded facets below a modillion
cornice and an ogeed roof clad in lead. A ball finial carries
a weather vane. Inside the lantern is a statue of St
Christopher, painted, probably lead c1702. The houses running
round the interior have paired doorways alternating with
single doors, and there are in all sixteen 3-light leaded
casements, all restored in the C20. 14 ridge stacks, mostly
rebuilt. There are also gabled dormers with 2-light leaded
casements as before: 2 to the west projections on the entrance
front, 3 each to the north and south sides and 6 to the long
east face.
INTERIOR: the houses were enlarged in 1959 by conversion to 10
from 20 units, and the entire interiors gutted. Winder
staircases removed. Further features removed during
restorations of the 1980s. The attic is no longer used for
domestic purposes. Roof of rafters and purlins entirely
replaced in 1959.
SUBSIDIARY FEATURES: the central entrance to the yard is to
the west: 2 gate piers and railings of diamond-section
verticals with spear-head finials.