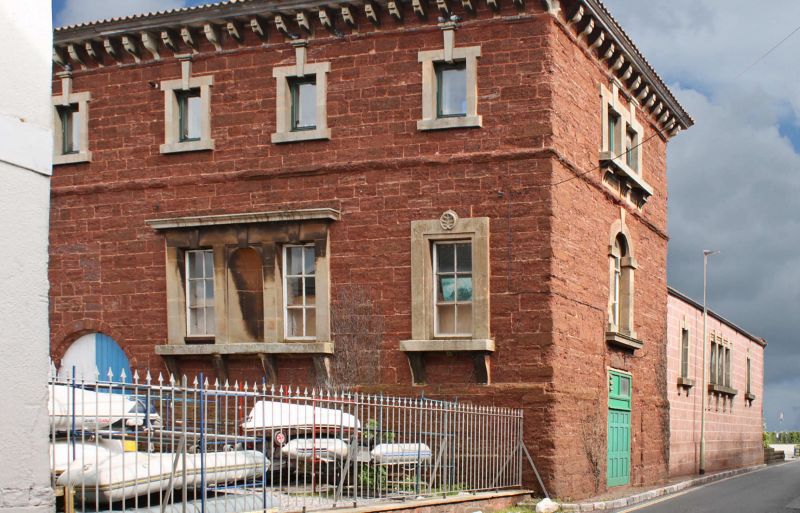 Pumping house of the South Devon Atmospheric Railway, projected to run between Exeter
and Plymouth. 1845, designed by Isambard Kingdom Brunel for the South Devon Railway
Company. Ashlar red sandstone with Bath stone dressings; hipped Roman tile roof(a
1980s replacement of the original); massive brick chimney built within a rectangular
sandstone ashlar tower, tower and chimney reduced in height by 50 foot after storm damage in the late C19. Italianate, the style of all the pumping houses on the line.
Plan: L plan, with the chimney in the angle between the 2 blocks. The west block
contained the boilers, the beam engine was contained in a taller block to the east.
The construction of the chimney, built without scaffolding, is said to be a unique
survival. After the economic failure of the atmospheric line in 1848 various
alterations to the pumping house were carried out including adaptation of the west
block as an engine shed for steam locomotives. In 1869 the east block was partly
converted for use as a Wesleyan Chapel until 1950 (Stell). The building was semi-
derelict until 1981 when it was sold away from British Rail, repaired and opened as
museum of the Atmospheric Railway.
Exterior: West block single-storey, east block 2 storey. Impressive external details
with variation to the heavy stone window surrounds. The east block, with 2 tiers of
windows, has a deep plinth, a moulded string below the upper windows and deep eaves
with a moulded eaves cornice carried on well-detailed moulded stone brackets.
Symmetrical 1 window north elevation with a 2-leaf door with glazed fanlight below a
round-headed window with a stone sill, a keystone and projecting jambs with bases and
capitals. Paired first floor window with a stone sill on brackets, keystones and
eared architraves. Asymmetrical 3-bay east elevation, the left hand lower tier
window with a sill on brackets, a moulded cornice and left and right windows with
keyblocks with a rounded niche in the centre. 3 first floor windows with keyblocks,
stone sills and eared architraves, identical to the first floor windows in the other
elevations. Blocked round-headed doorway to the left. The south elevation has a
ground floor doorway with heavy moulded architrave with a keystone and windows above
identical to those in the north elevation. The west block has a lower roofline and
plinth. The north elevation has 3 windows, a central tripartite window with a stone
sill on brackets, moulded architrave and keystones, flanked by similar one light
windows. The south elevation has 2 2-light windows with stone sills on brackets and
keystones. The west gable end, originally symmetrical, was altered after the
atmospheric railway was closed but preserves an original round-headed doorway to the
left with a recessed rusticated Bath stone arch with a keystone. Round-headed upper
opening blocked. To the right a tall round-headed opening dates from the period when
building was adapted as an engine shed for steam locomotives. The tower, rectangular
on plan and treated as a companile, has a deep plinth and rusticated quoins between
the plinth and moulded string course with clasping pilasters above and pilasters in
the centre of each face. The south and west elevations have round-headed slit
windows with keystones and voussoirs above the plinth and similar windows without
voussoirs lighting the spiral stair round the chimney. The tower was originally
crowned with a heavy cornice on moulded brackets.
Interior: No machinery survives but the shell of the building is intact including the
roof trusses: queen post and strut to the boiler house, king post over the taller
block with original iron ties. Many details survive to indicate the original
function of the building: the duct that carried smoke from the boilers to the
chimney; recesses cut into the walls of the taller block for the flywheel, and the
original massive crossbeams in the taller block, supported on corbels. These were
used for access to the upper parts of the machinery before they were used to support
a floor. The chimney, the only existing one of its type, was erected without scaffolding. The cylindrical brick shaft is enclosed by a spiral stair with slate
steps that allowed both shaft and tower to be built simultaneously without
scaffolding.
Other features associated with the pumping house, including a massive water tank,
exist below ground and are of historic and archaeological interest.
Starcross is the only complete Pumping House to survive from the 3 operational
atmospheric lines in the British Isles. The only other surviving artefacts from the
short-lived South Devon Atmospheric Railway are 2 sections of atmospheric tubing, one
held by the museum, another by the museum at Swindon. Brunel's son is said to have
destroyed many of the papers relating to his father's work on the railway, on the
basis that the scheme reflected poorly on the reputation of his father (information
from owner of the museum).
A building of considerable architectural distinction (and suprisingly well-preserved
considering its history between 1848 and 1981) and of outstanding historic interest.
The Italianate treatment of the chimney, five years before the publication of
Ruskin's Stones of Venice, reflects Brunel's "consciousness of design and current
architectural ideas" (Douet) and the only other example of the winding stair
constructon for a chimney known to date is Thomas Cubitt's Thamesbanks works (1846),
demolished.
An account of the railway, including 2 views of the pumping station when the tower
and chimney were complete, is given in Charles Hadfield's Atmospheric Railways
(1985). Information on the chimney from Jim Douet, unpublished notes.