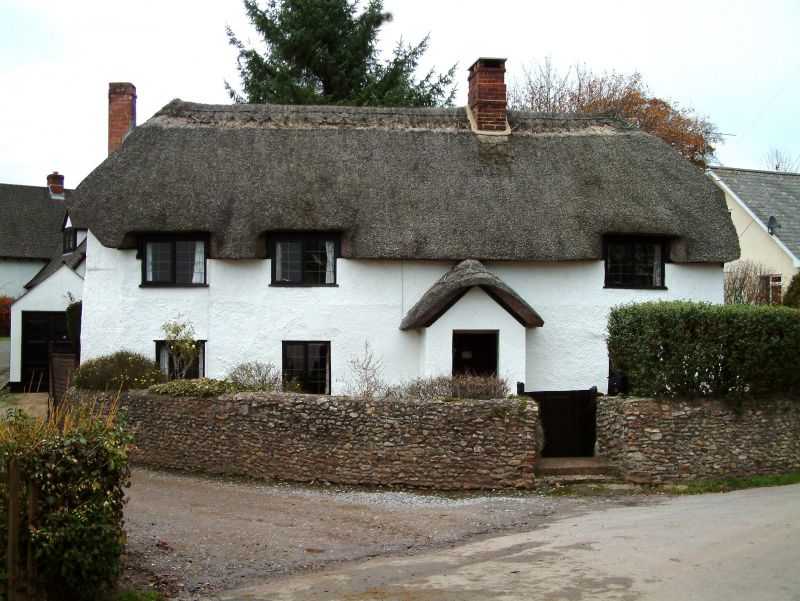 Small house. Early - mid C17 with circa C18 outshot, minor C19 improvements and
renovated in 1985. Plastered cob on stone rubble footings; the original stack is
cob, the other is late C19 brick and both are topped with C20 brick; thatch roof.
Plan: 3-room lobby entrance plan house facing south. The central room is the main
living room, the hall. It is the largest room and originally was the only heated
room. Its axial stack backs onto the right (east) end and it also serves the first
floor chamber. The lobby entrance is in front of the stack. A newel stair turret
projects to rear of the hall. The right room was later converted to a kitchen with a
stack backing onto the cob stack. The left room, the small inner room, was
originally unheated but, in the late C19, a rear corner stack was inserted. A C20
stair has been inserted in the front part of this room. 2 storeys with rear lean-to
outshot (now used as a kitchen).
Exterior: regular but not symmetrical 3-window front of C20 casements with glazing
bars; the first floor windows rise a short distance into the eaves. The lobby
entrance front doorway is right of centre and contains a C20 part-glazed door behind
a contemporary gabled and thatch-roofed porch. The left end corner is canted. The
roof is half-hipped both ends and is carried down over the rear outshot.
Interior: was not available for inspection at the time of this survey but the
previous list description contains most of the relevant information. It reported a
great deal of original C17 carpentry detail. In the hall the axial crossbeam is
chamfered with scroll stops. The fireplace has an oak lintel which is chamfered
with a masons mitre to right returning the chamfer down the side of an oak jamb.
The fireplace is now lined with C19 brick and includes an oven. The right room has
an axial beam with worn stops. The fireplace here has a heavily cambered oak
lintel. At the top of newel stair the wall plate has been cut with the same curved
profile as the stairwell. The roof structure has been completely renewed, mostly in
the C20 but two C18 trusses with X-apexes remain.
Feniton is an attractive little village containing a good group of listed buildings.