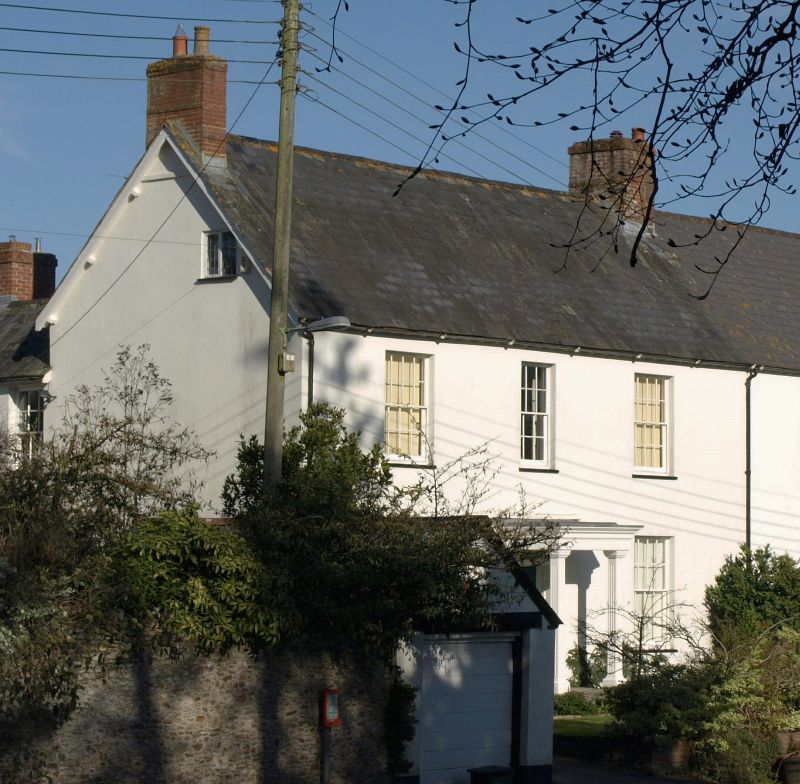 Former farmhouse. Early - mid C19, maybe earlier origins. Plastered brick and
local stone rubble; stone rubble stacks with early - mid C19 brick chimneyshafts;
slate roof.
Plan: U-plan house. The main block faces south-west. It has a double-depth plan
with a front and back room either side of a central entrance and rear staircase.
These are the principal rooms and are heated by end stacks. A 2-room plan kitchen
block projects at right angles to rear of the right end. The first room here has an
axial stack backing onto the main kitchen at the back which has a gable-end stack.
A 1-room plan extension to rear of the left end has a gable-end stack; it may be
secondary. House is 2 storeys with a basement under the front.
Exterior: symmetrical 3-window front is largely original. The outer bays have 16-
pane sashes flanking a first floor 12-pane sash over the central doorway which
contains its original panelled door (with inserted C20 window) behind a flat-roofed
porch with moulded entablature and panelled square-section posts. Plain eaves
although the gutter is C19 with cast iron lions head masks over the joints. The
roof is gable-ended to left and to right runs continuously over adjoining Thorn
Cottage (q.v). Towards the rear of the left is another C19 doorway; this one
containing a 6-panel door with a pedimented doorcase. The rear windows are mostly
C19 16-pane sashes although there are some C20 casements with glazing bars in the
kitchen block.
Interior: contains original joinery and other detail including a geometric open
string staircase with slender turned balusters with blocks. The kitchen has a large
fireplace. Although partly blocked some of the chamfered oak lintel is exposed.
Roof not inspected.
Court Barton was probably built with adjoining Thorn Cottage (q.v).
Feniton is an attractive little village containing a good group of listed buildings.