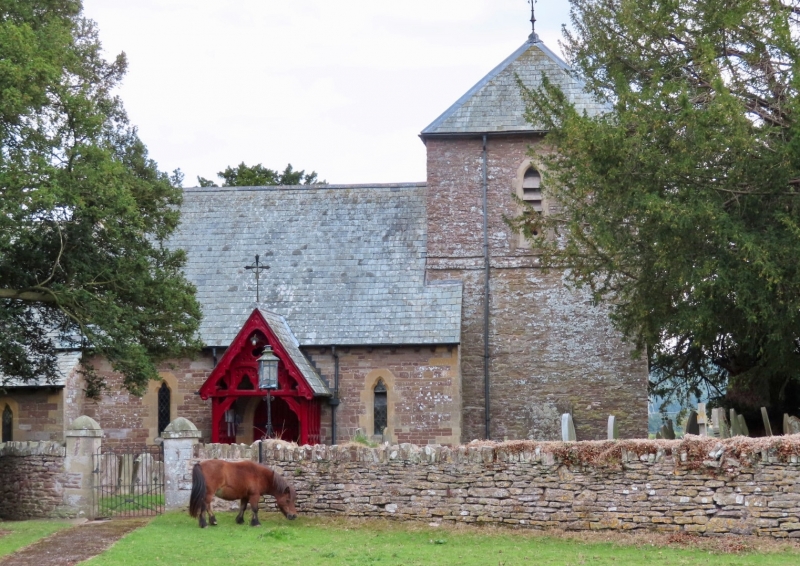 DINEDOR CP -
SO 53 NW
2/13 Church of St Andrew
GV II
Parish church. Rebuilt 1867-8 by F R Kempson, except for west tower which may
be C13. High Victorian Gothic in Early English style. Sandstone rubble and squared
sandstone rubble with Bath stone dressings. Welsh slate roofs. West tower, two-bay
nave with north porch and two-bay chancel with north vestry. West tower has two
stages, the upper one slightly recessed above two strings. Upper stage has one
C19 chamfered lancet with trefoil panel to base to each face except the east.
C19 window has two-centred head, two trefoil-headed lights with quatrefoil tracery
and moulded label with foliated stops. C19 pyramidical roof and wrought iron
weathercock. North elevation of nave has chamfered plinth and one trefoil-headed
light to each side of softwood gabled porch with trefoil headed elm panels, scissor
braces and gable cross. Wrought iron cross to east gable. South doorway has
chamfered two-centred head, pyramidal stops to jambs and ledged door with ornate
strap hinges. Vestry attached to chancel has small trefoil-headed light to right
of doorway with shouldered head, pyramidal stops to geet of jambs, ledged door
and enriched strap hinges. Stack with octagonal shaft. East elevation of chancel
has three stepped chamfered lancets each with moulded label and four foliated
stops, the inner pair sandwiched between the central and outer heads. Central
vent loop above. Gable has verge, kneelers and cross. Vestry to right has one
small trefoil-headed light. South elevation has a pair of trefoil-headed lights
to right-hand side of chancel and a similar single light to the left. Nave has
weathered buttress to right-hand side and two windows, each of two lancets separated
by an octagonal moulded shaft about which is a trefoil and a semi-circular label
with foliated stops. Interior: has wagon roofs, that of the chancel panelled,
that of the nave open with scissor struts above the ties. Chancel has inner window
arches dying into jambs. Trefoiled headed aumbry in north wall and low double
chamfered two-centred arch, also dying into jambs, leading into the vestry. Over
the head of the east window in the painted inscription: HOLY HOLY HOLY LORD GOD
OF HOSTS. Brass plaque on south wall; dated 1897, for Rowland Mucklestone "...
for 43 years Rector of Dyndor/ By his efforts this Church was restored and the
Rectory built". Two large brass C19 oil lamps. Nave has similar inner window
arches to those of chancel and a chamfered two-centred C19 tower arch above which
is a G III R hatchment dated 1820. Eastern window of south wall has stained glass
depicting two soldiers inscribed, "VALOUR" and "FORTITUDE".
On the left reveal of the same window a small brass Roll of Honour with the
names of five men, probably those from the parish who fell in World War II,
Between the south windows a monument with a brass cross, set as if on steps,
with red and black incised lettering on a black marble background
Two oil lamps like those in the chancel: Tower has font, probably C15
with octagonal base, stem and bows. Several wall monuments, late C18 to
mid-C19 including one for the Rev Francis Brickenden, died 1799 by Davies
of. Hereford, with draped urn and cornice above inscription panel and apron:
To the north of the tower is Bertie Davies' headstone (not included in this
list). He was 13 when he died: (BoE, p 133; RCHM, Vol I, p 54).