A Grade II* Listed Building in Weston under Penyard, County of Herefordshire 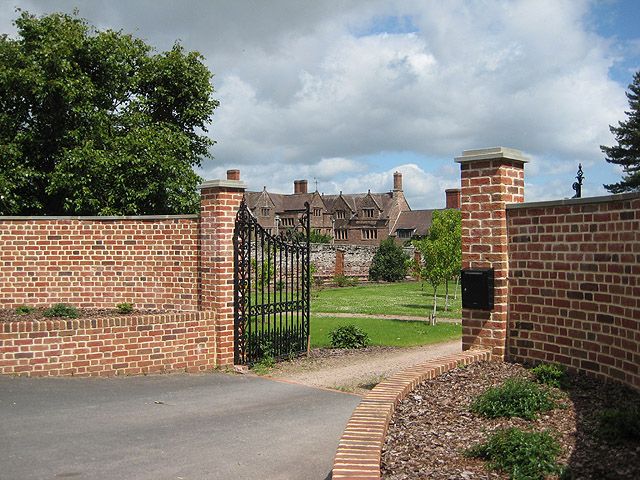 Find accommodation in
Weston under Penyard

House. Circa 1600 with earlier remains. Squared sandstone rubble with
tile roof. L-plan. Two storeys with attic. Main facade faces north-west
and has two bays to each side of gabled porch. Two string courses. Windows,
arranged symmetrically, are mullioned with rebate and ovolo moulding. Outer
bays have two-storey canted bay windows, each with four lights at the front.
Above, under gables, are 3-light attic windows. To each side of the porch
there is a 2-light window on both floors. The first floor window of the
porch is of three lights, the attic window of two. Above the round-headed
doorway is a cartouche of arms and crest of Nourse. The gables are coped
with ball finials. Chimneys to right of left-hand bay and projecting from
right-hand return wall. The left-hand return wall has two strings, mullioned
windows, and two gables with attic windows. Interior: not accessible at
time of survey, but when recorded by RCHM had moulded ceiling beams, fire-
places with moulded surrounds, and panelling. The south end of the south
wing, at the right of the main facade, was said to contain the remains of
a timber-framed building and to have a roof partly of C15 date. Formerly
known as Lower Weston. (RCHM, p 211).