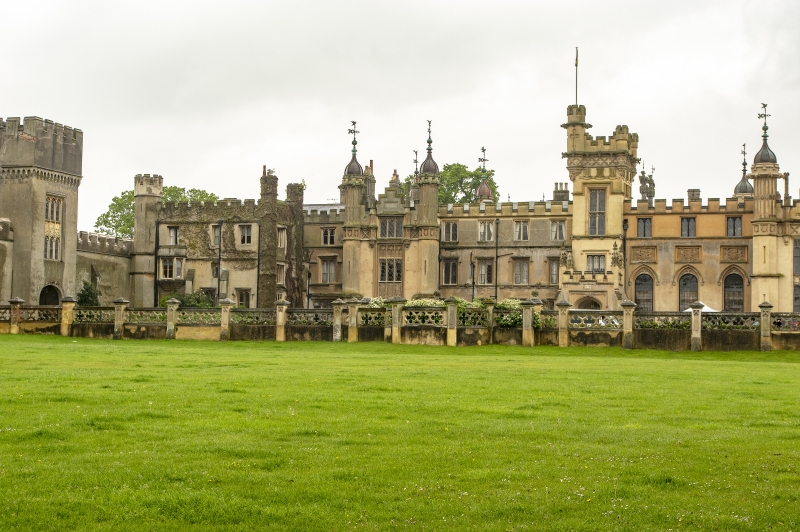 Country House. Home of the Lytton family since 1492. It is one
wing of a mid C16 brick courtyard house, the other 3 sides
demolished in 1811 by Mrs Bulwer Lytton. Transformed as a Tudor-
style stuccoed mansion c1815 - 1820 by J B Rebecca and modified
in a more lavish Tudor style by H E Kendall for Sir Edward Bulwer
Lytton soon after 1843. A third storey added to the E, entrance
front in 1878 by John Lee. Servants' wing added at same time by
George Devey, this demolished and replaced in 1950. Alterations
including library by Sir Edwin Lutyens, 1907. 2-3 storeys.
Stucco on red brick. Some early brickwork exposed on E
elevation. This elevation has central and outer protections with
tall angle turrets. Central porch has extravagant castellated
attic. Carved gargoyles and blank heraldic motifs. The wings
have large mullioned windows with traceried horizontal banding.
Crow step central gables. Traceried octagonal turrets with ogee
domes. Wall right of porch has 3 tall pointed-arch windows.
Other windows are 2 liqhts with Tudor hood moulds. Late C19 3-
window projection on left, joining with screen wall at right
angles. This has massive gateway tower and round terminal tower.
Garden elevation is more richly detailed. Continuous traceried
frieze below battlements, interrupted by finials and slender
octagonal turrets. Central porch is a round turret with square
additions, including 1st floor oriel flanked by square turret.
Deeply moulded 4-centre arch door. 2-liqht Tudor windows with
rich cusping, those on left side larger and divided by transoms.
Extension on riqht of late C19 with 3-storey canted bay window.
S elevation is by Lutyens. It has 1:3:1 sash windows in moulded
stone frames and a 2-storey canted bay with a mullioned leaded
window.