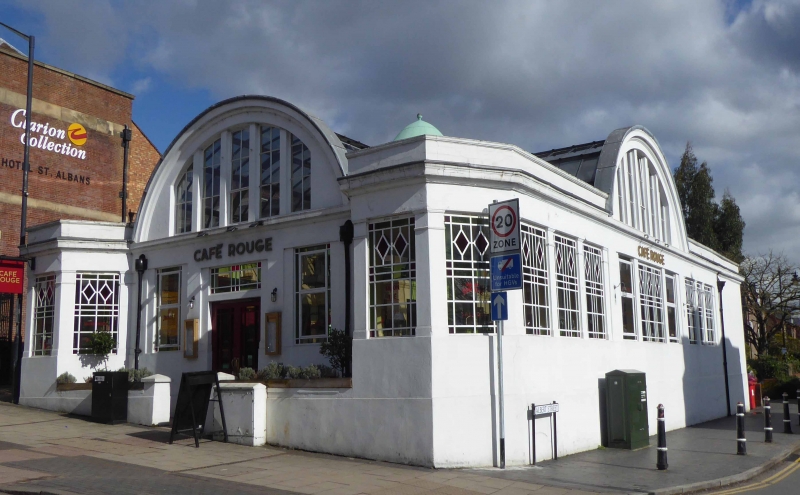 HOLYWELL HILL
No 27A

Conservatory and seed hall. Circa 1930, (plans submitted 1930 by
Percival C. Blow for messrs Ryder and sons, seed and bulb
merchants). Rendered brick, reinforced concrete and steel frame
with a patent glazed roof with semi-circular gable ends and with
a small central dome overcrosswing. Rectangular on plan hall
with main entrance on the west end giving directly into from
Holywell Hill and with wings at rear flanking yard. Classical
details and Art Deco type glazing. 1 storey. Symmetrical 3:3:3.
west front, the outer windows in canted bays with pilastered
piers, metal frame window with patterned glazing bars, moulded
cornice and blocking course. Central doorway with panelled and
glazed double doors and overlight and window left and right with
margin panes. Over the centre the glazed semi-circular gable end
of the roof has 5 tall lights with glazing bars. The cornice of
the flanking bays continue around left and right hand (north and
south) returns of 3:3:3 bays with similar metal frame windows and
pilaster and similar semi-circular glazed gable end over centre
3 bays. The central cupola over the crosswing has a rendered drum
and shallow ogee copper-clad dome with a small ball finial. These
were originally done over the corners where the roof is now flat.
Interior: reinforced concrete ribs spring from square piers to
a ring over the crosswing which rises above the roof as the drum
of the cupola. The intermediate ribs of the vaults, the purlins
and glazing bars are of rolled steel. A suspended ceiling at
springing level has been inserted.
Note: Built for Samuel Ryder the seed merchant, whose office No
27 (qv) is situated immediately to the north. It was built for
displaying the firms merchandise. Ryder became Mayor of St Albans
in 1905 and a deacon of Trinity. He was the presenter in 1927 of
the Ryder Cup, the Great Britain Versus U.S. golf tournament
trophy.