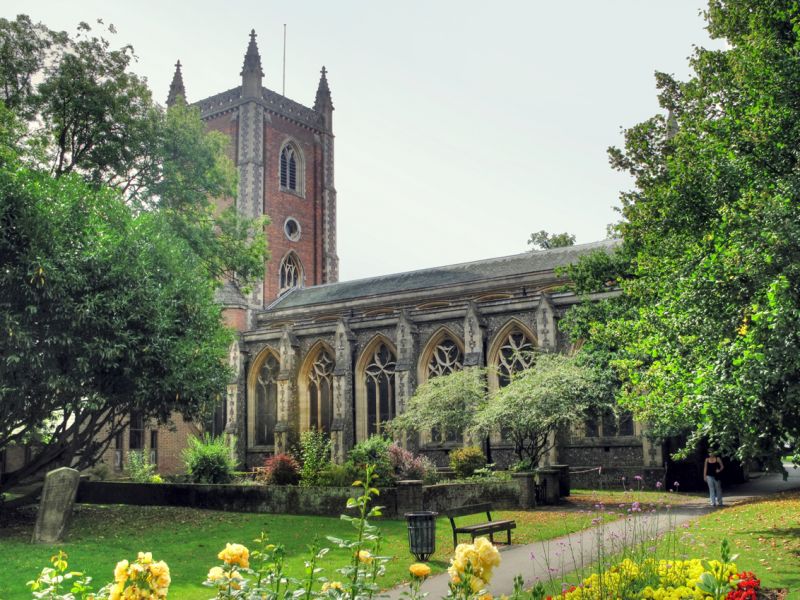 GV II*
A little medieval work remains (C13 doorways and C15 arcades) and the tower is said to be a rebuilding following the collapse of the previous one in 1801 but the rest is the work of Lord Grimthorpe in 1893-5 when the nave was lengthened to the W by a bay, the N aisle was widened by 1.2m, and the chancel also lengthened. Parish rooms of 1992 by David Morgan.

MATERIALS: The tower is of English bond red brick while the rest of the church is of flint with limestone dressings. Slate roofs. Red brick is used for the parish rooms.

EXTERIOR: The chancel has large clasping buttresses terminating in large conical ashlar pinnacles. The E window is Perpendicular and has five lights and above there is a lobed trefoil in the gable. In the chancel side windows there are large lancets with shafts. The SE vestry has segmental-headed two-light traceried windows and coped parapet. The red-brick crossing tower has clasping flint and ashlar buttresses which terminate in large cricketed conical pinnacles and a pierced, corbelled parapet. In the lower part of the tower there are three-light Perpendicular traceried windows with roll-moulded tracery. Above come roundels with moulded frames, Y-tracery belfry windows. There is a projecting NW polygonal stair turret to the lower stage and there is a clock face on the S side of the tower. To the aisles there are buttresses with set-offs and gables, and coped parapets. The nave has a clerestory with three-light uncusped windows under Tudor arches. At the W end of the nave there are polygonal N and S turrets with buttresses terminating in large conical pinnacles. There is a massive W rose window above a small moulded W doorway. The lean-to aisles have large W end lancets. In the N aisle there are large windows with Victorian curvilinear Decorated tracery whereas the S aisle has originally medieval Perpendicular windows of three lights although the stonework has been renewed. The S porch has a step tiled roof and clasping buttresses and a moulded outer doorway. The inner doorway dates back to the C13 and has nook shafts with moulded capitals linked to a stoup with a stone frame with a brattished cornice.

INTERIOR: The walls are plastered and painted, including the stonework of the arcades and other stonework originally meant to be exposed. The W and E arches of the crossing have four orders of chamfers, the chamfers dying into lozenge-shaped responds. Between the nave and the aisles there are seven-bay arcades with very tall piers of a standard section with four shafts and four hollows. The nave walls incorporate carved and painted corbel heads from the pre-1890s roof. The roof over the nave is of king-post and strut construction with iron bands and two tiers of purlins, the tie-beams being carried on moulded stone corbels. There is a similar roof in the chancel. The aisle roofs have arched braces from the outer ace of the arcades carried on clustered demi-shafts and two tiers of purlins. At the crossing there is a flat boarded ceiling divided into panels by moulded ribs. The sanctuary is floored with black and white paving.

PRINCIPAL FIXTURES: At the W entrance to the crossing there is an elaborate Perpendicular-style screen of 1905 by Temple Moore with coving, cresting and cusped arches. The reredos with fielded panelling, gilded cresting and a canopy was dedicated in 1946. The panelling in the chancel is designed to match. A dado of similar panelling in the aisles was completed in 1962. The choir stalls to the W of the crossing are work of the C20.There is a fine, lavishly carved polygonal timber pulpit of 1863 by J A Goyers of Lincoln: the sides are carved with figures of the Evangelists under cusped arches, and a panel of elaborated vine carving below the handrail. The font has a richly carved tapering octagonal stone bowl on an octagonal stem decorated with shafts with carved capitals. The pews ends have sunk panels flanked by miniature angle buttresses and include holders and drip-trays for umbrellas. Monuments include a brass to Roger Pemberton, high sheriff of Hertfordshire in 1620. There is also a large wall monument to Edward Strong, mason, d 1723. This is crowned by an open pediment with a bust. He was chief master mason on St Paul's Cathedral and the inscription records his work on `that stupendous fabrick' of Wren's; he also worked on 5 of Wren's churches, on Greenwich Palace, Winchester Palace and Blenheim Palace. There is an interesting collection of stained glass. The S aisle is filled with windows of 1868-72 by Capronnier of Brussels and is a series illustrating parables. The 1913 E window is by Kempe and Co., designed by J W Lisle. There is a further Kempe window at the W end of the N aisle. The fine glass in the rose window was executed by Burlison and Grylls in 1922. There is an unusual and fine window in the E bay of the N aisle designed by Louis Davies and executed by Powell and Powell.

HISTORY: The first church on the site is said to have been built, along with those of St Michael and St Stephen, by Abbot Wulfsin in the mid-10th century (VCH). The church had by the C13 taken the form it was to retain down to the C18 and documentary evidence exists for a central tower by 1254. There was much rebuilding in the C15, notably with the rebuilding of the arcades. In 1756 the tower arches were taken out and loftier ones inserted, and the tower was heightened with what were to be disastrous consequences. Underpinning took place in 1785 but to no avail so in 1799 it was taken down to the top of the arches. In 1801 the belfry floor fell which brought about a rebuilding, completed in 1803. The next major scheme was Lord Grimthorpe's major rebuilding campaign of the 1890s. Edmund Beckett (Denison), created Lord Grimthorpe in 1886 (1816-1905), was an amateur architect linked with the completion of the Big Ben clock tower at Westminster. He is best known for his extreme restoration of St Alban's Abbey in 1880-85; the robustness of his approach to replacement and invention resonate here also.

REASONS FOR DESIGNATION:
The church St Peter, St Albans, is designated at Grade II* for the following principal reasons:
* It is a large and imposing town church with medieval work of the C13 and C15, and remodelled in the 1890s by Lord Grimthorpe.
* It has a number of fittings of interest, including monuments and stained glass by several well-known makers; the memorial to Edward Strong is especially noteworthy.
* It has very strong townscape value.
* Its relationship, through the Grimthorpe restoration, to the Abbey of St Alban's (now Cathedral)