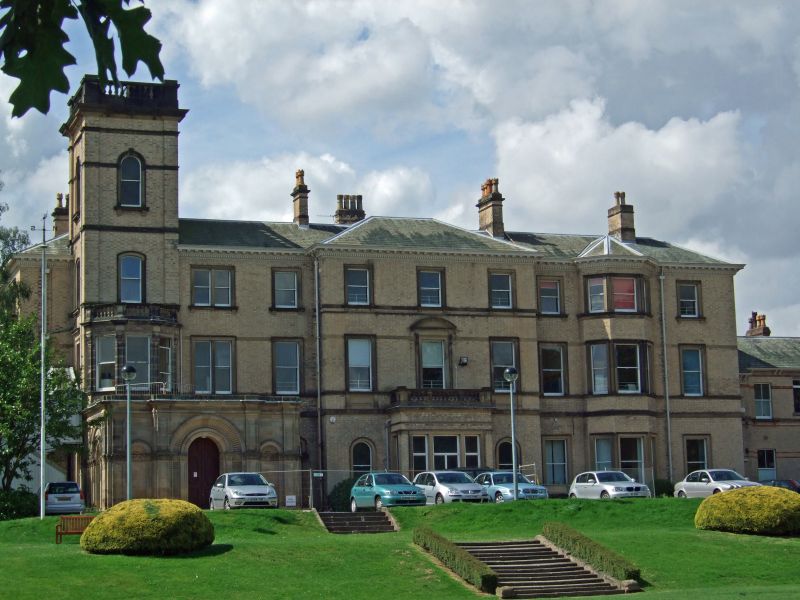 House. c1874. For Arthur Wilson. White brick with ashlar dressings, slate
roofs. 3 storeys, 9 bays in balanced elevation: centre 3 bays break
forward; left bay rises as a 4-stage tower. Projecting porch to left:
double-leaf round-headed glazed and panelled door in moulded round-headed
opening with impost band flanked by pilasters. To right and to left are
shallow round-headed niches. End pilasters and cornice with low blocking
course. To bay 3, a 2-light. casement in an architrave with segmental head.
Bay 4: two-pane round-headed sash in an architrave. Bay 5: a square bay
window with a central 2-light casement flanked by 2-pane sashes: end
pilasters, frieze, balustraded parapet. Bay 6: round-headed 2-pane sash in
an architrave. Bays 7 and 9 have similar square-headed 2-pane sashes with,
between them, a canted bay window rising through the full height of the
house with 2-pane sashes to each side. First-floor band and sill band.
Canted bay window with 2-pane sashes under a balustraded parapet to bay one.
Bay 2: paired narrow 2-pane sashes in an architrave. 2-pane sashes in
architraves to all other bays, that to the centre bay with a segmental
pediment. Second floor: sill band to centre 3 bays. Bay 1: 4-pane sash in
segmental headed architrave. Bay 2: paired narrow 2-pane sashes in an
architrave. 2-pane sashes in architraves to all other bays. Bracketed
sills to windows in bays 1-3, 7 and 9. Oversailing eaves on modillion
cornice, axial stacks, hipped roof. Tower: third-floor band. Third floor:
2-pane sash in keyed round-headed architrave with impost band on bracketed
sill. Band, cornice, and balustraded parapet with abutments to angles.
Garden front: 3 storeys, 4 irregularly-spaced bays. Bay one rises as a
semicircular bay window through 2 storeys, bay 4 has a canted bay window,
also through 2 storeys. Impost band. Bay one: five 2-light windows with
overlights to round bay window. Bay 2: similar paired windows under
segmental heads. Bay 3: similar single window. Bay 4: 3 similar windows
in round-headed openings with ashlar heads. First-floor band and sill band.
First floor: 2-pane sashes in architraves throughout. Cornice and
balustraded parapet to each bay. Second floor: tripartite 2-pane sashes to
right and to left: single 2-pane sashes to bays 2 and 3. All windows in
architraves on bracketed sills. Modillion eaves cornice, axial stacks,
hipped roof. Tower, recessed to right, has 2-pane sashes to all 4 stages:
round-headed to ground floor, square-headed in pilastered surround under
floating cornice to first floor, segmental headed to second floor, round-
headed in keyed architrave to third floor. Bands run round from main front;
rear wall stack. Interior: the interior is characterised by lavish and
costly decoration of good quality in an approximately Neoclassical style.
The entrance porch is covered in elaborate plasterwork which extends to the
backs of the doors: to either side of these are radiator boxes with cast-
iron foliate-panels carrying white marble benches. The doors into the large
stairhall are filled with patterned and coloured glass. The stair itself
and the balcony which runs around the hall at first-floor level are late C19
additions and are richly carved; many of the carvings being references to
the owner's occupation as Master of the Holderness Hunt.