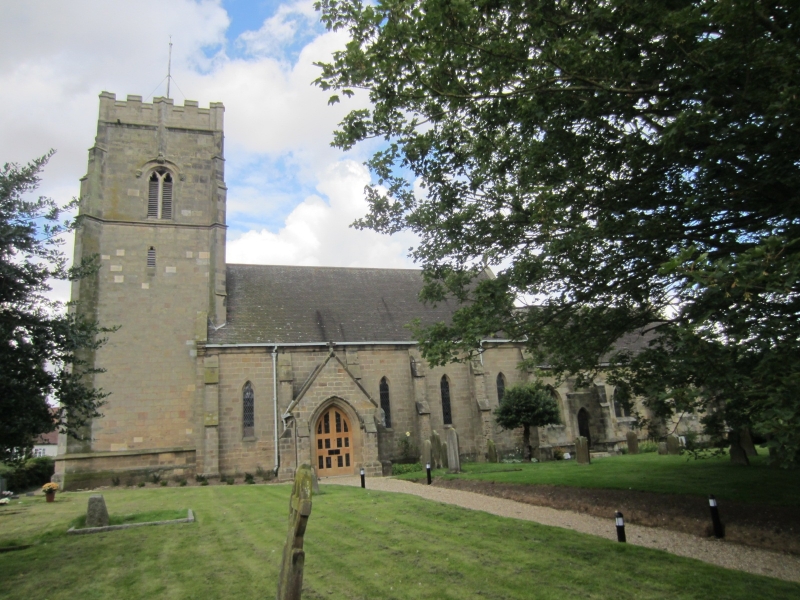 Find accommodation in
Middleton on the Wolds

LUND LOCKINGTON ROAD
SE 94 NE
(north side)
2/54 Church of All Saints
7.2.68
II*
Church. C15 west tower, chancel 1845-6 by Chantrell, nave rebuilt 1853.
Ashlar, flat tile roofs. 2-stage west tower, 5-bay nave with south porch
and north aisle, 3-bay chancel with north vestry. Tower: moulded plinth,
diagonal buttresses with offsets. Small trefoil-headed light to lower
stage. 2-light pointed belfry opening with cinquefoil heads under hoodmould
with face stops and an angel at the apex. Crenellated parapet. 3-light
pointed west window with Perpendicular tracery under hoodmould with
grotesque stops. Above, the figure of a praying priest. Nave: chamfered
plinth, buttresses with offsets. Trefoil-headed lancets, chamfered corbel
table, raised coped gable with Celtic cross finial. Projecting south porch
has pointed door under hoodmould with foliated stops. Double-chamfered
pointed south door to nave. Chancel: high chamfered plinth, buttresses with
offsets. 3 pointed windows with cusped Y-tracery, pointed priests' door
with continuous chamfer: on the chamfer, over the head of the door, is
inscribed: 'A DAY IN THY COURTS IS BETTER THAN A THOUSAND'. 3-light pointed
east window with curvilinear tracery under hoodmould. Coped gable with
flory cross finial. Interior: pointed double-chamfered tower arch dying
into responds, traces of red ochre paint to arch. Above are 3 equidistant
praying angels, the central angel apparently supporting a rood. To left and
right are flanking tower buttresses corbelled out over moulded bases
embellished with foliage. North arcade of 5 bays: cylindrical piers on
waterholding bases carry round abaci supporting pointed double-chamfered
arches. C12 tub font with blank arcading trimmed back at the base. North
wall of north aisle bears a wall tablet in memory of Thomas Delgarno, Vicar,
died 1717, and to Mary and Elizabeth, his daughters. Plain marble tablet
with good lettering in eared and shouldered architrave under a shallow open
pediment. Beneath the tablet is a cherub on a small corbel. Chancel: C15
tomb recess to north wall, now used as a portal to the north vestry. Nearby
lies a fragment of an alabaster chest tomb: an angel carries a shield
beneath a crocketed ogee. In the north-east and south-east corners of the
chancel are medieval effigies of 2 women: that in the north-east corner
bears her heart in her hands.